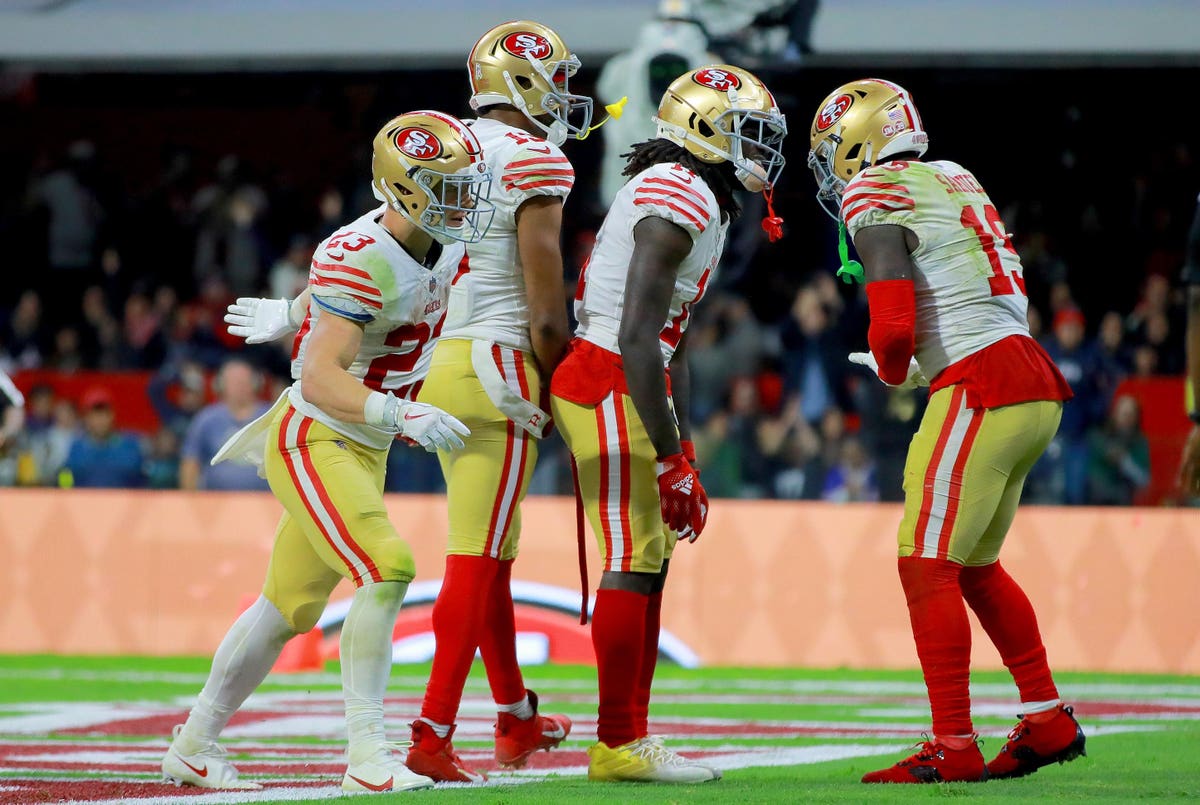 The San Francisco 49ers on Sunday face the challenge of having to maintain their position at the top of the NFC West on the back of a short week. However, having crushed the Arizona Cardinals in Mexico City on Monday, they will attack that task in buoyant mood and with an offense that is growing increasingly multiple and ever more dangerous.

San Francisco routed Arizona 38-10 at Estadio Azteca to move to 6-4 and first place in the division, averaging 6.8 yards per play on offense in a game that saw quarterback Jimmy Garoppolo throw four passing touchdowns in the most emphatic demonstration yet of the high ceiling this attack has following the infusion of running back Christian McCaffrey into the lineup.

It was a game that saw the 49ers lean heavily on the passing game in the first half, with Garoppolo again benefiting hugely from having McCaffrey as an outlet through the air before they pivoted to the ground attack in the second, controlling a one-sided contest in large part through Elijah Mitchell’s success in taking advantage of the lanes opened for him by the San Francisco’s offensive line and in creating yardage for himself.

In addition to being a game in which the 49ers achieved balance between run and pass, throwing the ball 29 times and running it on 28 plays, it was also one in which they spread the ball around their plethora of offensive playmakers.

McCaffrey and the 49ers’ self-titled ‘wide back’ Deebo Samuel each did damage on the ground and through the air and went over 100 yards from scrimmage. Tight end George Kittle had 84 yards receiving and two touchdowns and Brandon Aiyuk found the endzone twice on his only two catches of the game.

Asked about the range of contributions the 49ers received on offense in Week 11, head coach Kyle Shanahan said on Wednesday.

“You balance it out where everyone has chances to get the ball, but I don’t think it’ll ever be like that.

“It was like everybody got a B+, A- because everyone did really good, but if someone ever does great then there’s not enough for anyone else… it’s going to take away from someone and just to watch everyone contribute, all the receivers, the tight end, the running backs it was just kind of cool how it worked out and yeah, we’d always like to try to make it that way, but usually the coverages won’t allow it. It was cool, that’s why it was so much fun.”

The 49ers may not be able to have such considerable joy distributing the ball between their top weapons in Week 12 against a New Orleans Saints defense that still has plenty of talent even though it has not performed at the level many expected and is a step up from the Cardinals unit they faced in Mexico.

New Orleans is 15th in Football Outsiders DVOA on defense, while the Cardinals rank 24th in the same metric.

Yet the 49ers don’t necessarily have to spread the ball around or be balanced to thrive on offense. That is the beauty of the sheer number of weapons they have at their disposal.

San Francisco can have a game where it relies predominantly on the pass or the run and a different pass-catcher can emerge as the primary threat on a different week. Regardless of which aspect of the offense or which player becomes the focal point, defenses must always respect the danger posed by the host of other playmakers around them.

The 49ers also have avenues to further stressing defenses already under strain by game planning for their litany of weapons. Shanahan is the NFL’s pre-eminent exponent of pre and at-the-snap motion, utilizing both ceaselessly to manipulate pass coverages and torment second-level defenders.

Against the Cardinals, he frequently took the opportunity to put the dual-threats of McCaffrey and Samuel in the backfield and then motion at least one into the formation as a receiver, giving defenders yet another headache to deal with pre-snap.

It is McCaffrey’s influence as a receiver that has unlocked the 49er offense, the former Carolina Panther’s proficiency in making defenders miss in the open field ensuring Garoppolo almost always has a big-play option at his disposal. Additionally, his gravity – combined with that of Samuel – in attracting the attention of defenders, is already generating favorable looks for teammates.

Since McCaffrey arrived, the 49ers are fifth in Expected Points Added per play on offense, fourth in dropback EPA per play and seventh in rush EPA per play, according to rbsdm.com.

This is a top-10 offense in every facet that has no shortage of means through which to attack and exploit the weaknesses of its opponents.

A well-coached New Orleans defense figures to test those capabilities more strenuously than the Cardinals did, but the mounting evidence of recent weeks suggests that, either through balance or the dominance of one individual weapon, Shanahan’s attack will find a way to deliver the decisive production.