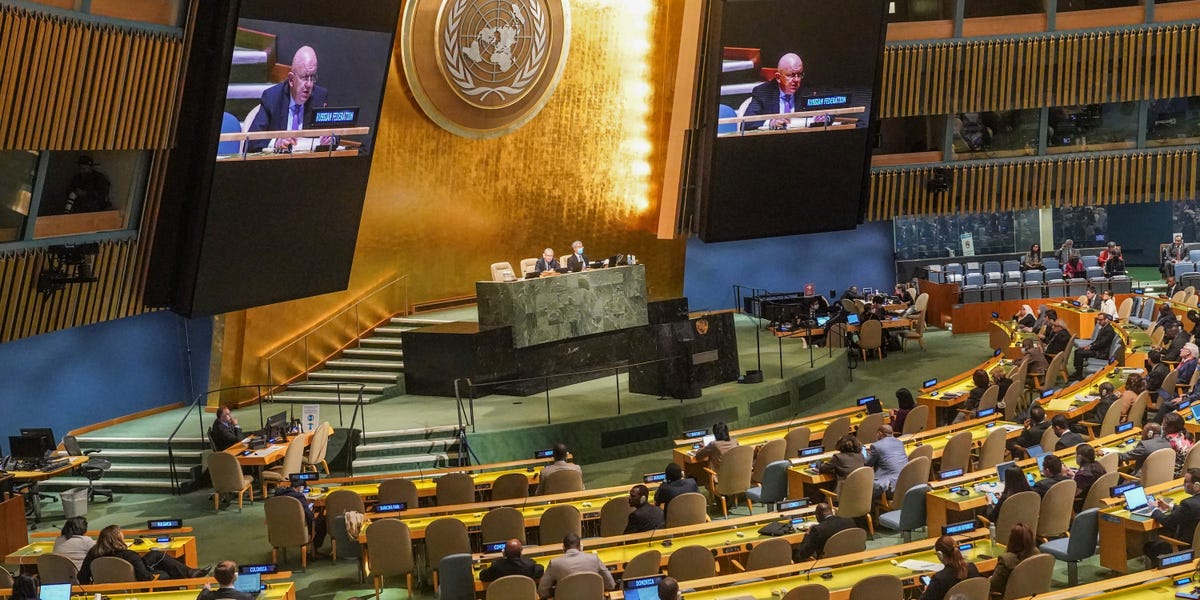 The UN General Assembly on Wednesday issued a sweeping condemnation of Russia’s attempt to annex four territories in Ukraine last month in a resolute display of global disapproval.

The vote was sparked by Russia’s recent annexation of partially-occupied territories in Ukraine, including the Kherson, Luhansk, Donetsk, and Zaporizhzhia regions. The UN General Assembly in its measure demanded that Russia reverse the land grab.

The 193-member body issued its most staunch support for Ukraine yet during Wednesday’s vote, which saw 143 nations condemn Russia’s actions and 35 countries abstain from voting.

Only five countries voted against the resolution, one of which was Russia itself. North Korea, Belarus, Syria, and Nicaragua — all led by dictator-like regimes — joined the increasingly isolated nation.

The remaining 10 countries did not vote — a slight, technical distinction from the abstention option.

After the vote, the German Foreign Office tweeted a photo of the results, saying: “That is what being on the wrong side of history looks like.”

It was a stronger response than many Western officials had expected, as well as the most robust showing of support from the UN General Assembly for Ukraine since the war began in February. The body has voted on four resolutions in the months since Russia invaded, including a demand for a Russian cease-fire and a measure to suspend Russia from the UN’s Geneva-based Human Rights Council.

Several nations that had previously abstained from or not voted on the prior resolutions joined the majority on Wednesday to vote “yes,” including Bangladesh, Morocco, and Iraq. Among the additional surprises were Saudi Arabia and the United Arab Emirates.

Sergiy Kyslytsya, who serves as Ukraine’s ambassador to the UN, called the vote a “historic moment,” according to the Associated Press, while European Union Ambassador Olof Skoog said the vote sends a message to Russia that they are “isolated.”

Thursday’s vote followed a Monday gathering of the UN General Assembly in which the body overwhelmingly vetoed Russia’s effort to conduct the annexation vote via secret ballot. The initial gathering, in which Ukraine’s delegate was met with applause and Russia’s ambassador greeted by silence, foreshadowed the conclusion to come.

Western nations had undertaken a significant lobbying effort to make sure Thursday’s resolution passed and celebrated the victory as a reinvigorated sign of support for Ukraine.

The General Assembly’s resolutions, while indicative of global attitude, are not legally binding.