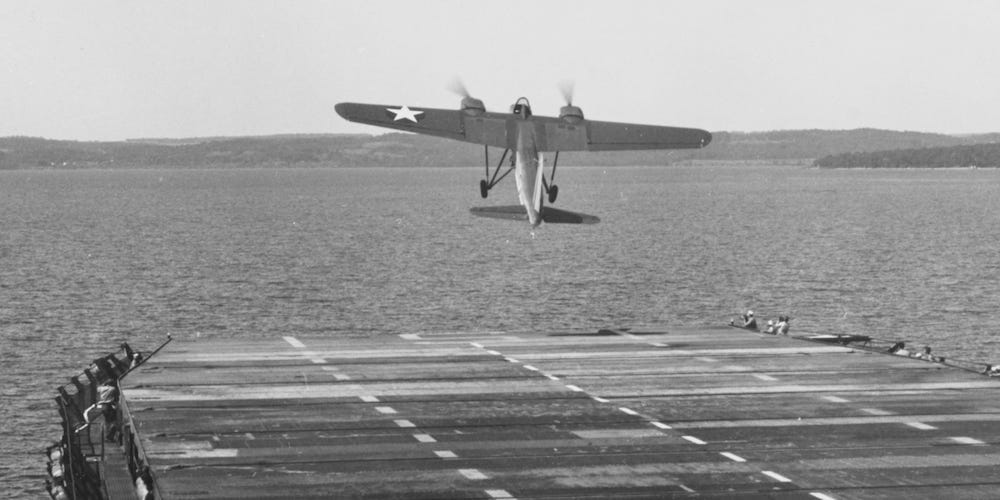 80 years after launching the first drone from an aircraft carrier, the US Navy is planning to fill its flattops with them

The US Navy is working hard to incorporate unmanned aircraft into its aviation fleet. Service officials now say they aim for drones to compose 60% of their carrier air wings, a sizable increase from the 40% goal cited in the past.

Leading the way on that effort is Boeing’s MQ-25 Stingray, and unmanned aerial refueling drone that Navy officials say could eventually take on new roles, such as intelligence-gathering.

The MQ-25 is expected to achieve initial operational capability by September 2025 and deploy aboard a carrier in 2026.

It will be the first purpose-built carrier-based drone in service with any navy, but it won’t be the first drone that the US Navy has operated from a flattop.

That distinction belongs to Naval Aircraft Factory’s TDN-1, which on August 10, 1943 became the first US Navy drone to take off from an aircraft carrier.

Unmanned vehicles were not a new concept in the 1940s.

The US Navy had even been using radio-controlled target ships for gunnery and bombing practice for over a decade. With the evolution of radio and television technology, unmanned aircraft were also becoming a reality.

The TDN-1 was designed by the Naval Aircraft Factory (NAF), a Navy-owned enterprise established during World War I that made aircraft exclusively for the Navy.

In January 1942, shortly after the US formally entered World War II, NAF was tasked with creating an unmanned aircraft that could carry bombs and torpedoes and be deployed on carriers.

A month later, NAF’s prototype was approved for production.

The prototype was about 37 feet long and had a 48-foot wingspan. It could be controlled from a ground station or from another plane flying nearby. (The accompanying plane could control several TDN-1s at once.) It also had a cockpit if a human pilot was needed.

It was mostly made of wood, carried a nose-mounted camera, and had radio-control equipment in a fuselage compartment aft of the cockpit. It could carry a single 2,000-pound bomb or torpedo or two smaller bombs instead.

The US Navy ordered 100 TDN-1s, which were designated “assault drones,” in March 1942. On August 10, three TDN-1s made history when they took off from the training aircraft carrier USS Sable in Lake Michigan.

The first TDN-1 got airborne after a steeper than usual takeoff. The second TDN-1 had an even steeper takeoff angle, causing it to stall and crash into the water. The third TBN-1’s takeoff was a complete success.

The first and third drones were able to land at a nearby base.

On October 31, 1944, six TDN-1s with the Special Air Task Force made history yet again when they were launched into flight from the escort carrier USS Charger.

Ultimately, the TDN-1 was never deployed. The technology proved too complicated and too expensive for mass production and the project was canceled. Many of the remaining TND-1s were later used as target drones instead.

The TDN-1 did, however, inform the design of the Interstate TDR-1 assault drone, which saw limited use with the Navy in the Pacific before the war’s end.

Eight decades later, the Navy is again trying to integrate fixed-wing drones into its air wings.

The MQ-25 is designed to carry 15,000 pounds of fuel about 500 nautical miles, allowing it to extend the operating range of an F/A-18 by about 300 miles and freeing up the other aircraft, usually F/A-18s, that are normally assigned aerial-refueling duties.

The drone has demonstrated its ability to refuel friendly aircraft, conducted manned-unmanned teaming tests, and undergone deck-handling tests at sea aboard the carrier USS George H.W. Bush, though it has yet to land on or take off from a carrier.

In September, Boeing announced that the MQ-25 and its ground control station had shown the ability to work with an F/A-18 fighter, a P-8A maritime patrol aircraft, and an E-2D command-and-control aircraft on surveillance missions in a virtual demonstration this past spring.

Tests of the MQ-25 are also informing the Navy’s understanding of how future drones will work with fighter jets and operate aboard a carrier as well as how the Stingray’s ground control station, which has one operator, will control other Navy drones, service officials told Aviation Week at the Tailhook Association symposium in September.

Those officials also outlined the new goal of unmanned aircraft making up 60% of the air wing.

As the MQ-25 comes online and sailors “get more proficient” with it, “we will then grow the larger percentage of unmanned within the carrier air wing to do multiple different roles,” Rear Adm. Stephen Tedford, Navy program executive officer for unmanned aviation and strike weapons, told Inside Defense in September.