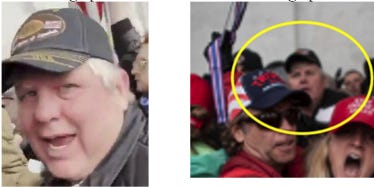 A Christian pastor from Ohio was arrested over Capitol riot charges after telling congregants they needed to give the government ‘reason to fear us,’ prosecutors say


In December 2020, an Ohio pastor stood before his congregants, griped about a stolen election, and said they needed to give the government a reason to fear them, federal prosecutors said.

“The Government, the tyrants, the socialists, the Marxists, the progressives, the RINOs, they fear you. And they should. Our problem is we haven’t given them reason to fear us,” William Dunfee said, according to an FBI criminal complaint that cited a video posted to his church’s Facebook page.

According to the complaint, Dunfee, a 57-year-old Christian pastor from Frazeysburg, Ohio, also said: “They used to tell us, you know what, you settle your differences at the ballot. How did that work out for us? It’s not over.”

Ten days later, he was at the Capitol on January 6, 2021, prosecutors said.

Dunfee was arrested and charged Wednesday with several misdemeanor and felony counts related to the Capitol riot, including obstructing an official proceeding, interfering with law enforcement during civil disorder, and engaging in physical violence in the Capitol grounds.

Prosecutors said Dunfee illegally entered the Capitol grounds and told the crowd through a megaphone: “We are taking our house.” They also accused him of pushing a metal barricade into US Capitol Police officers who were trying to hold back the mob. Afterwards, Dunfee celebrated with exclamations of “Hallelujah” and “We did it. We shut ’em all down. We did our job,” the complaint said.

The FBI identified Dunfee after a tipster flagged a Facebook comment in which another person said “Pastor Bill” had led the way as his ministry group “stormed” the Capitol. The criminal complaint showed several screenshots of videos purporting to show Dunfee during the attack.

After the Capitol riot, Dunfee went on to preach about what happened, the complaint said.

On May 30, 2021, Dunfee told his congregants they showed up to the Capitol on January 6, 2021, “to let it be known that we are not going to stand back and let an election be stolen,” adding that the people at the Capitol have been called “terrorists” but that there were actually “many, many, many patriots.”

“And I thank god they showed up to just to let it be known … you are not stealing this election,” he said, according to the complaint. “You’re not going to rob us, deprive us of a democracy, of a republic, without us being heard.”