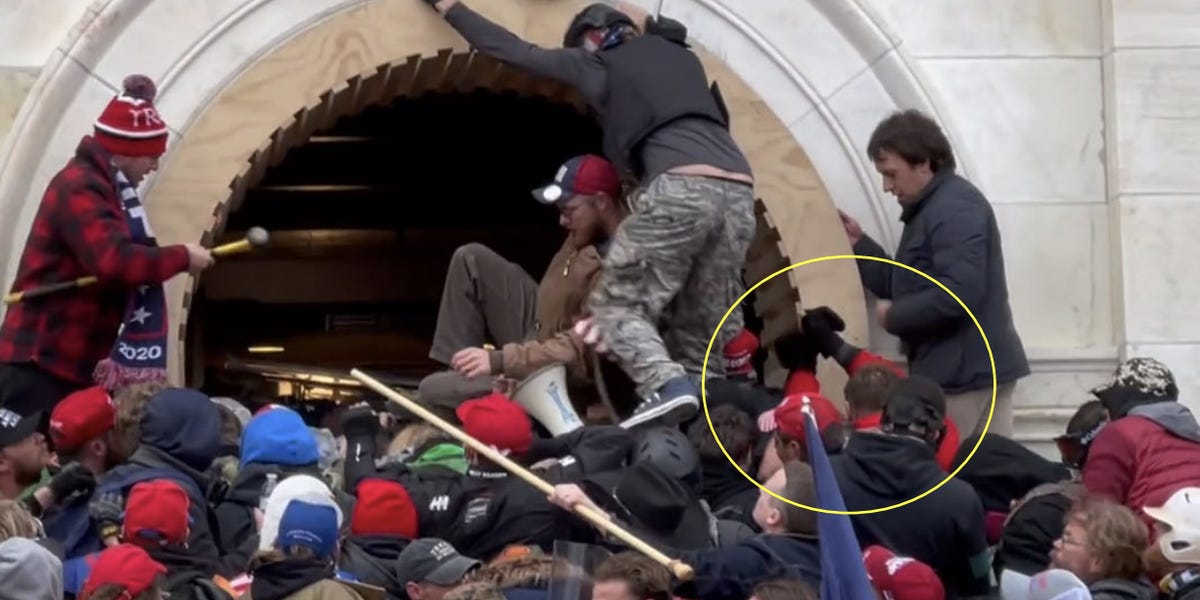 A man and his stepson were charged with assaulting police officers on Jan. 6 after telling investigators, ‘conservatives don’t protest, they have jobs’

A Washington state school board director and his 20-year-old stepson were arrested this week on multiple felony and misdemeanor Capitol riot charges, including assaulting police officers and obstructing law enforcement during civil disorder.

Richard Slaughter, 40, and Caden Paul Gottfried, 20, were arrested and charged Wednesday for their role in the January 6, 2021 insurrection. The duo made an initial court appearance in Tacoma, Washington, and were released ahead of further court proceedings.

The two men were charged with 10 counts.

Prosecutors say the duo was among a group of rioters who fought law enforcement officers near the entrance to the Lower West Terrace tunnel on Jan. 6. Amid the chaos, Slaughter grabbed a police shield from another rioter and kept it away from an officer, according to court documents.

Slaughter then began to engage the officers, telling them to “stand down” and suggesting that “nobody will fucking hurt,” the officers if they “just walk away,” according to charging docs. Prosecutors say Slaughter then used a long pole to assault officers who were manning the front line of the tunnel and handed chemical spray to another member of the mob.

Gottfried was also in the tunnel and used his body weight to push against the guarding officers, according to prosecutors. Law enforcement officers eventually pulled Gottfried into the tunnel where he was detained for a period of time before being released, per court records.

Investigators were first alerted to Slaughter and Gottfried’s presence at the riot on January 7, 2021, following an inflight incident on the duo’s Alaska Airlines flight home, according to prosecutors, who said the men were cited for non-compliance with the airline’s mask policy, as well as for protesting the results of the 2020 election.

During a February 2021 interview, Slaughter told the FBI that he had been present at the Capitol building on Jan. 6 with Gottfried, but denied seeing any crimes committed. He reportedly told investigators: “conservatives don’t protest, they have jobs.”

Slaughter was sworn in as an Orting School District school board director in December 2021. A spokesperson for the Washington school district did not immediately respond to Insider’s request for comment but told King 5 News on Thursday that he is still a member of the board.

Neither Slaughter nor Gottfried had attorney information available.