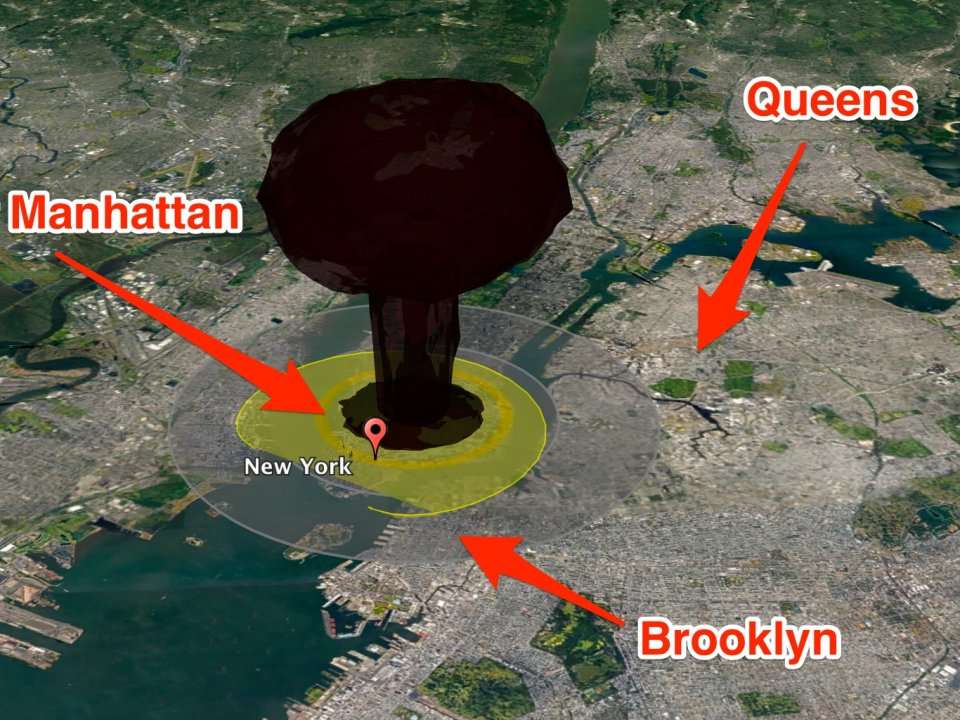 A nuclear attack would most likely target 1 of 6 US cities. Simulated images show how a Hiroshima-like explosion would affect each.

It’s the disaster for which no city is prepared: A nuclear bomb strikes the US, triggering a blinding flash of light, a giant orange fireball, building-toppling shockwaves, and dangerous nuclear fallout.

“There isn’t a single jurisdiction in America that has anything approaching an adequate plan to deal with a nuclear detonation,” Irwin Redlener, a public-health expert at Columbia University who specializes in disaster preparedness, told Business Insider.

The US Federal Emergency Management Agency has some simple advice for those catastrophic circumstances: Get inside, stay inside, and stay tuned.

He thinks even the six most likely targets – New York, Chicago, Houston, Los Angeles, San Francisco, and Washington, DC – wouldn’t be ready with a sufficient response. Those cities would be particularly at risk, he said, because they’re some of the largest and densest in the country. They’re also home to critical infrastructure like energy plants, financial hubs, government facilities, and wireless transmission systems.

To help people understand how a nuke would affect large cities around the world, nuclear-weapons historian Alex Wellerstein created an interactive tool called NukeMap that allows users to simulate the consequences based on customizable variables. Using updated Cold War models of nuclear explosions, Wellerstein’s simulator can roughly predict the number of casualties and injuries from a nuclear bomb in a given place, big or small. The data is meant to be “evocative, not definitive,” he writes on the simulation website, since nuclear attacks are difficult to model.

The following images created using Wellerstein’s simulation tool show how each of the six cities Redlener named would be affected by a 15-kiloton blast – the kind detonated over Hiroshima during World War II.