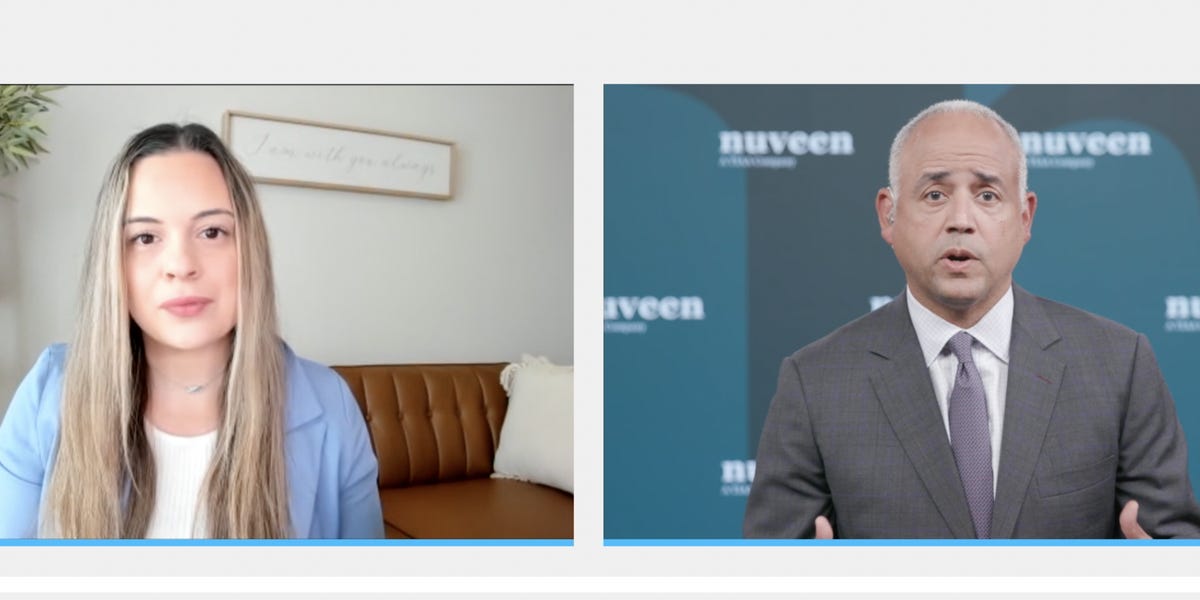 For Jose Minaya, the CEO of Nuveen, the asset manager for the financial-services giant TIAA, National Hispanic Heritage Month is a time to reflect on the American dream.

The executive — one of only a handful of Hispanic people leading a major company in the US — grew up seeing the financial burdens that often weigh on communities of color and first-generation Americans.

As a child, Minaya’s parents struggled to afford new shoes for him. His father washed dishes at a restaurant. His mother cleaned hotel rooms. To study for the SAT, he split the cost of one book with a friend and they shared it.

Now Minaya, 51, runs a company with more than $1 trillion in assets under management. But he hasn’t forgotten his past.

Hispanic households earn about half as much as white households on average and possess only about 15 to 20% as much net wealth, a Federal Reserve analysis of 2021 data found. Many Hispanics don’t have a financial role model or anyone to turn to for financial advice. Despite these persistent barriers and having experienced what he called a “humble upbringing,” Minaya remains optimistic and says a better version of capitalism is still possible.

“The American dream is still alive and well, though inequalities absolutely still exist,” Minaya said. “Shareholders are demanding diversity and inclusion, clients are demanding this, and in the war for talent, it’s important. It is a perfect storm that in all three of those areas, people care about these issues.”

The exec, who lives in Charlotte, North Carolina, also remains steadfast that more companies will embrace diversity and inclusion. This comes amid pushback from some critics who describe these types of diversity efforts as “woke capitalism.”

“Inclusion is a massive business opportunity,” Minaya said. “Even if you don’t believe in research showing the importance of diversity and inclusion — if you don’t do it well, you just ain’t getting the money at the end of the day.”

Speaking with Insider for Hispanic Heritage Month, which runs from mid-September through mid-October, Minaya weighed in on both the accomplishments and the lingering struggles that affect his community.

This interview has been lightly edited for length and clarity.

You’re a first-generation Hispanic American who grew up in what you’ve called “humble beginnings.” English was your second language. How did your childhood shape who you are as a leader today?

I became resourceful and curious, because while I came from a very loving family and community, there wasn’t much they could help me with in terms of orientating me when leaving that community or going to college, going to Wall Street, going into financial services. So I had to figure things out along the way.

In addition to the well-documented pay gap between Hispanic Americans and white Americans, Hispanic households face particular economic challenges. They are 17% less likely than white households to have access to a retirement plan, for example. How are you working to change that?

It’s about inclusion and capitalism. Hispanics are one of the fastest-growing minority groups in the US. If you think about the GDP that that community generates, that is an amazing amount of buying power. Then when you think about that demographic, and how less than a third of them have access to a retirement product, service, or retirement advice, you realize it’s about being more inclusive.

Early in my career, I saw materials being generated in Spanish as people recognized, “Oh, we have more clients who speak Spanish.” When I looked at the materials, I was like, “You know, my mom would actually be kind of insulted by this. It translates only dictionarywise.”

That happened because there weren’t the right people at the table to be able to really understand that community and be able to engage with it and sell to it. So, to me, that is the focus today. It’s one around understanding. We need to be more inclusive as a society and bring these different cohorts along.

We also have to realize it’s a massive business opportunity. These are all people that can use retirement services. It will better themselves. It will increase their net worth, and it will make them better in society as well.

Nuveen has many portfolio companies. How are you making diversity, equity, and inclusion a focus not just at your own company but at the companies you work with?

For me, it’s always about focusing on the bottom line. Diverse firms, diverse boards — they make better decisions. They have better performance.

It’s good old capitalism — understanding the buying power of minority communities is there. And by the way, when you start losing business to other companies that do get this right, I think people tend to wake up.

You’re a proponent of “inclusive capitalism,” but how can you advance that idea when we have so much headwind against environmental, social, and governance issues and diversity?

As we think about inclusive capital, to me, it’s very simple. I think it’s a bottom-line issue. We can look at the demographics of this country, the buying power different communities have, and then we can realize, “OK, this is an attractive investment thesis.”

The more access I have to different investment opportunities, the better I’m going to do, right? At Nuveen, we’ve started our own program of investing in my minority-owned firms and minority-owned private-equity sponsors as well.

You mentioned the headwinds with regards to ESG. I think it’s actually a positive because for too long, ESG was just an acronym. Today there is a lot more scrutiny because it’s becoming more real. It was this narrative of, “Do the right thing.” Well now, there’s natural disasters. There’s floods. There’s fires. There’s real issues going on in the labor force. It’s about understanding that we have to look at these issues from a risk factor.

Whether you like this or not, your clients are going to be demanding more focus on ESG. I think this is becoming more institutionalized. You’re going to see regulators getting more involved. It may seem like headwinds, but it is really what provides the right kind of metrics in place to allow the capital markets to really expand in this particular area. So yes, it’s become more political — there are more headwinds. But I think this has been a long time coming. The discussion is here, and I think it’s really what will propel us to the next phase.

How are you paving the way for others from underrepresented backgrounds in the future? How are you thinking about your legacy?

I think for first-generation Americans, and definitely someone coming out of the Hispanic community, it can be a very lonely place — leaving your community. Entering corporate America, you often don’t have a lot in common with the people around you. Early on in my career, I was really focused on how to acclimate. Sometimes that meant I wasn’t being my true self at work every day. I was trying to fit in.