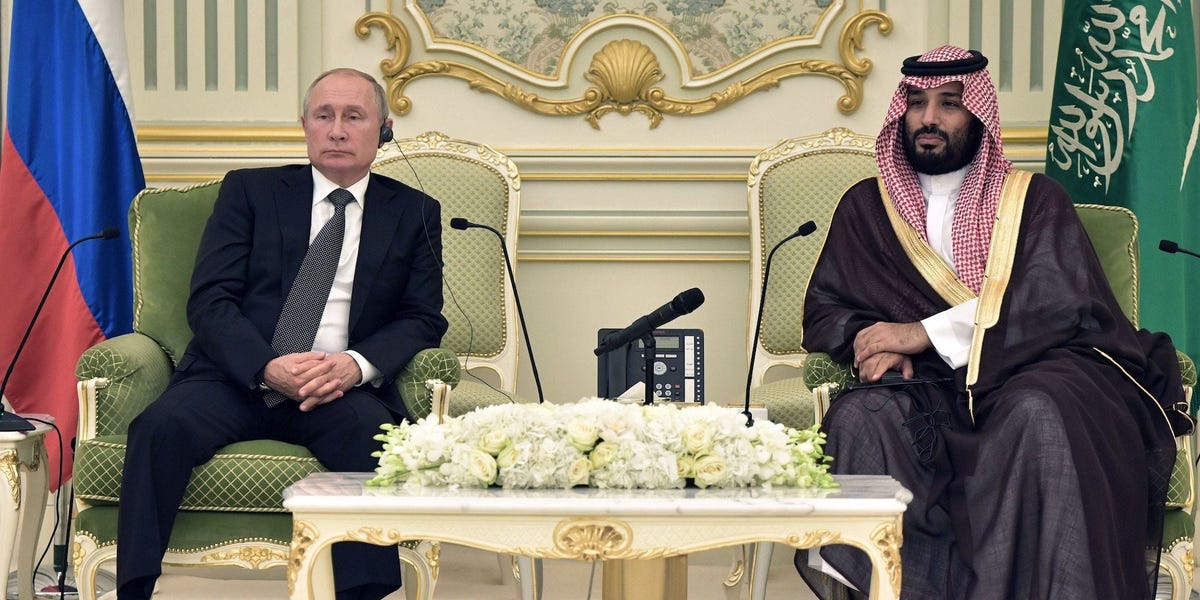 Democratic Sen. Bob Menendez of New Jersey on Monday called on the US to “freeze” cooperation with Saudi Arabia over the recent decision by OPEC+ to cut oil production to boost prices, effectively accusing the nation of fueling Russia’s war machine amid Moscow’s ongoing invasion of Ukraine.

Menendez, chairman of the Senate Foreign Relations Committee, condemned Russia over strikes that hit cities and vital infrastructure across Ukraine, including Kyiv. The strikes on Monday marked the first time the Ukrainian capital had been targeted in months and represented a significant escalation in the war.

“I am horrified by Russia’s depraved and desperate escalation against civilian infrastructure across Ukraine,” Menendez said in a statement, pledging to use all the means at his disposal to “accelerate support for the people of Ukraine and to starve Russia’s war machine.”

Menendez went on to excoriate Saudi Arabia, OPEC’s leading member, accusing it of helping “underwrite Putin’s war through the OPEC+ cartel.” OPEC+ is a group of 23 oil-exporting countries that includes Russia.

“There is simply no room to play both sides of this conflict — either you support the rest of the free world in trying to stop a war criminal from violently wiping off an entire country off the map, or you support him. The Kingdom of Saudi Arabia chose the latter in a terrible decision driven by economic self-interest,” Menendez said.

Russia’s war in Ukraine has fomented a global energy crisis. Generally, Russia is a major supplier of oil and natural gas to the EU, but Western sanctions have targeted Russia’s energy industry in an effort to cut off an important revenue stream. That said, Russia continues to sell its energy to other countries, such as India and China.

The US tried and failed to convince OPEC+ not to cut oil production, hoping to prevent Russia from gaining additional revenue from a spike in oil prices. The Biden administration slammed OPEC+ over the decision. “It’s clear that OPEC+ is aligning with Russia with today’s announcement,” White House spokesperson Karin Jean-Pierre said last week.

Menendez in his statement said the US must “immediately freeze all aspects of our cooperation with Saudi Arabia, including any arms sales and security cooperation beyond what is absolutely necessary to defend US personnel and interests.”

The New Jersey Democrat went on to say he would not “green-light any cooperation with Riyadh until the Kingdom reassess its position with respect to the war in Ukraine,” adding, “Enough is enough.”

Relations between the US and Saudi Arabia have been on shaky ground for years, largely since the brutal 2018 murder of Jamal Khashoggi by agents of the Saudi government. Last year, the Biden administration released a declassified intelligence report that explicitly implicated Saudi Crown Prince Mohammed bin Salman — often referred to as MBS — in Khashoggi’s killing. Khashoggi, a Saudi national, was a Washington Post columnist at the time of his death.

Khashoggi’s killing prompted a wave of backlash in the US, with congressional lawmakers on both sides of the aisle calling for the US to reassess relations with the Saudis. Former President Donald Trump stood in the way of efforts to punish the Saudis for Khashoggi’s killing.

On the campaign trail, President Joe Biden pledged to make Saudi Arabia a “pariah” over Khashoggi’s murder. But as president, he’s faced criticism for his approach to relations with the kingdom. Biden said he would move to end US support for the Saudi-led coalition in Yemen, but his administration continued arms sales to the kingdom. The president was the target of especially fierce criticism for meeting with MBS in July. Biden sought to convince the Saudi ruler to increase oil production, but was unsuccessful.