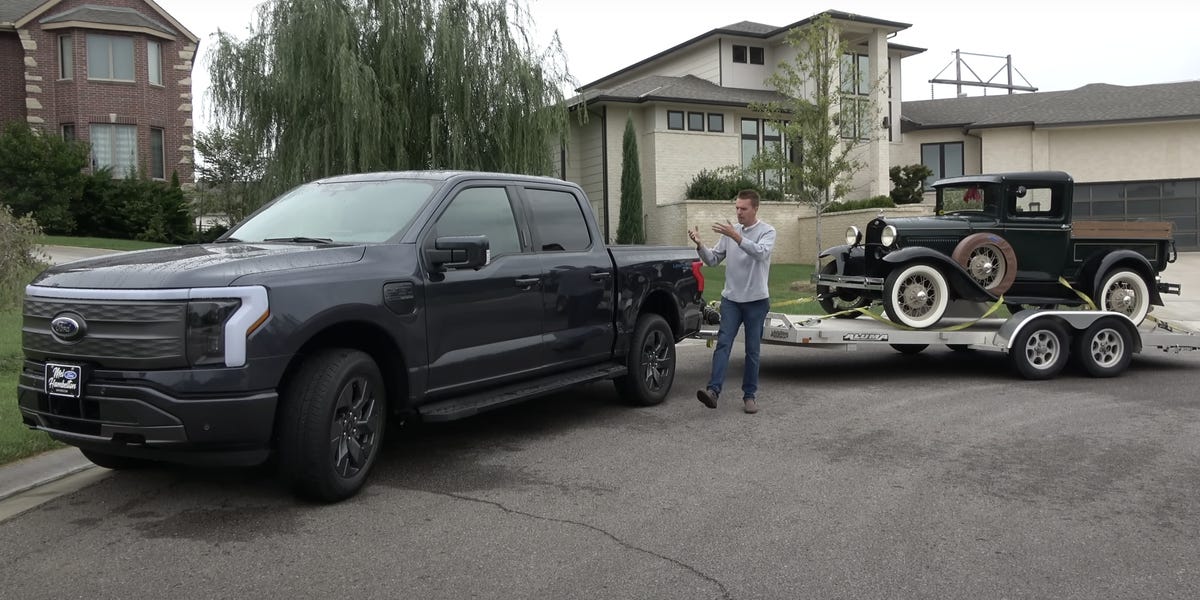 
One YouTuber learned the hard way that towing a heavy load is more complicated with an electric truck than a gasoline-powered one.

In a recent video on his Hoovie’s Garage channel, Tyler Hoover put the towing capability of his Ford F-150 Lightning to the test — and he called the experience a “complete and total disaster.” The saga illustrates one of the challenges to owning a battery-powered truck: towing range.

Hoover charged up his Lightning to 200 miles (almost all of its 230-mile range) and set out for a trip to his mechanic 32 miles away to pick up a 1930 Ford Model A and tow it home. As soon as Hoover set out pulling an empty trailer, the Lightning’s range started “dropping like a stone.”

In the end, the 64-mile journey sucked up 150 miles of range from the Lightning’s battery.

“The truck towing 3,500 pounds can’t even go 100 miles,” he said. “That is ridiculously stupid. This truck can’t do normal truck things.”

To be sure, Hoover’s test wasn’t exactly scientific. In a follow-up video, he conceded that his trailer and boxy 1930 Ford weren’t especially aerodynamic.

Still, the clip highlights an important point: Extra weight and drag can deal a significant blow to an electric vehicle’s range, which can make towing with them tricky. Gas trucks lose efficiency when towing too, but with them it’s easy to pull over and fuel up. Running low on energy in an EV means stopping for 45 minutes at a fast-charging station.

Other towing tests with EV trucks have yielded similar, though less dramatic, results.

Car and Driver hitched a 6,100-pound camper to each of the three electric pickups on the market: the F-150 Lightning, GMC Hummer EV, and Rivian R1T. At 70 mph in 85-degree conditions, maximum range dropped to 100 miles for the Ford, 140 miles for the Hummer, and 110 miles for the Rivian.

Edmunds noticed a more modest 26.7% drop in efficiency when towing a Tesla Model 3 with the Lightning, but it stuck to 55 mph for its test. Electric trucks have tons of torque, so actually pulling lots of weight isn’t an issue.

Ford, for its part, built tools into the F-150 Lightning to reduce range anxiety while towing.

Owners can load details about their trailer into the truck to receive better range estimates. Onboard scales weigh the trailer and adjust range predictions accordingly. The so-called Intelligent Range feature also factors in weather, road grade, and data from other Lightning owners to fine-tune mileage estimates.

Still, limited towing range isn’t a concern for all truck buyers. Lots of people love trucks because they’re big, comfy, and have a bed — not because they need to tow boats and RVs.