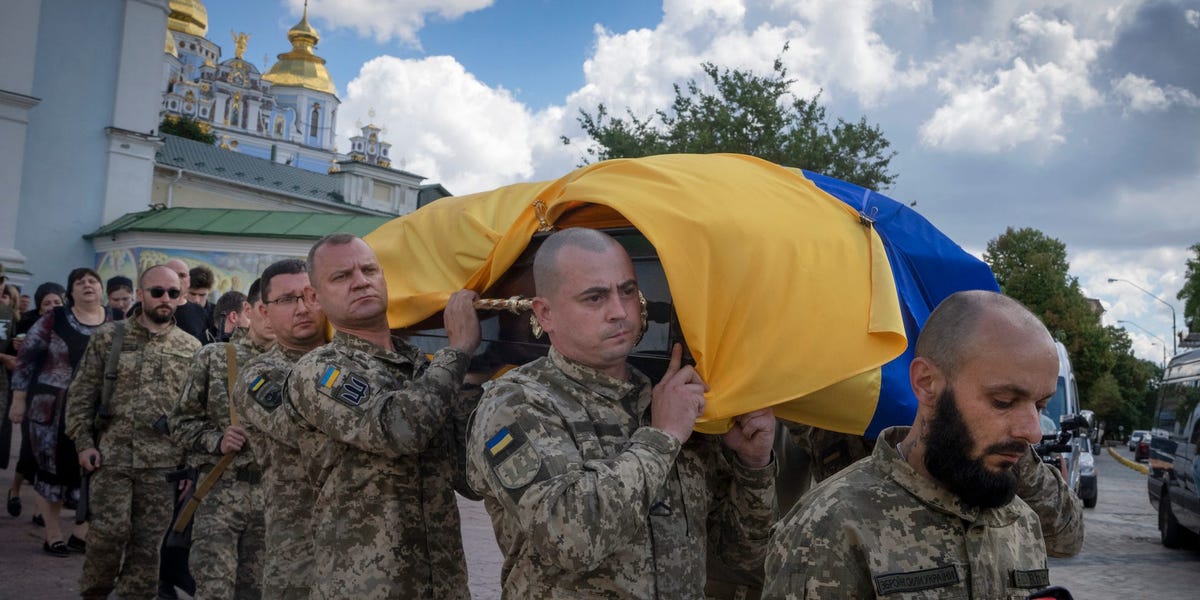 After years of being ignored, the countries that know Putin’s Russia the best have been proved totally right

Ingrida Šimonytė was 14 when her country, Lithuania, gained independence from the Soviet Union.

Her experience of Soviet occupation, she told Insider, left her nation forever wary that Russia would continue trying to subjugate its neighbors.

And she was unsurprised when Vladimir Putin invaded Ukraine, prompting an urgent response from her as Lithuania’s prime minister.

“For many years, many countries believed that you can sort of drag people into democracy through business and communication and freedom of travel,” she said, describing the once-common expectation that Russia would gradually become more liberal.

“We were very doubtful about it.”

Šimonytė is one of many leaders in Lithuania and Russia’s other Baltic neighbors who spent years warning the world that Russia was still a major threat.

She and other senior figures in the governments of Estonia and Latvia described to Insider in interviews how the invasion has seen their warnings finally acknowledged as grimly correct.

“We should have listened”

In a landmark moment, the most senior official in the EU, European Commission President Ursula von der Leyen admitted last month that nations like her native Germany had been naive.

“One lesson from this war is we should have listened to those who know Putin,” Ursula von der Leyen said.

“They have been telling us for years that Putin would not stop.”

She identified Ukraine, Moldova, Georgia as countries which knew better, as well as the Baltic countries of Latvia, Lithuania, and Estonia — three of the EU’s 27 members.

Those countries repeatedly warned that Russia could target them, while fending off Russian cyberattacks, and prepared their own citizens for war.

They were ahead of the curve in warning that the prospect of full-scale war in Ukraine was real, even as the US government struggled to persuade other nations to take Putin’s military build-up seriously.

They are now the countries disproportionately spending their limited resources to help Ukraine — far outpacing the US, UK, and other European nations by the share of their GDPs dedicated to the conflict.

Artis Pabriks, the defense minister of Latvia, told Insider he wished he had been wrong about Russia.

He warned as long ago as 2014 that Russia was an “existential threat” to Latvia, and watched in horror as tanks, artillery, and attack helicopters poured into Ukraine in February 2022.

“We would be more happy if we were wrong about Russia,” he told Insider. “It’s quite ironic, but unfortunately it’s true.”

Russian forces had long been attacking Ukraine, waging a more limited war in the Donbas region since 2014, when it also Russia annexed Ukraine’s Crimea peninsula.

John E. Herbst, the US ambassador to Ukraine from 2003 to 2006, told Insider many in Europe did not see Putin as likely to start a major war until it was too late, even despite Russia’s actions in the Donbas.

“There was a great deal of false understanding in Europe about what Putin’s policy was like,” he said.

“There was an inclination on the part of many, not all, to see all Putin was waging for almost eight years before his big February invasion as not much of a war, which would not require a serious response.”

“And then after the huge conventional invasion in February, many of those people changed their minds.”

Pabriks did not single out any countries but said some would, until recently, “speak about values, but make business with Russia.”

Germany in particular embraced Russian business, purchasing huge quantities of gas from Russia and approving two Nord Stream pipelines despite warnings from the US and eastern Europe.

The Crimea annexation did prompt a wave of sanctions, and Russia’s ejection from the G7, but did little to seriously derail Russia’s activities.

Its super-rich continued to seamlessly move from Moscow to European capitals like London, Paris, and Rome, buying up companies and real estate as they went.

Šimonytė said Lithuania’s approach was informed by the fact that “many of the people who went through the hell of Soviet occupation are still living — including myself.”

She said it left Lithuania with “a very sensitive ear to what was happening” in Russia as it prepared to invade, all the while denying that it had any intention of starting a war.

“Some of our friends in other countries were kind of thinking it cannot be like this, this is not rational, let’s be realistic, you are paranoid, and this sort of stuff. And I think it was delusional.”

She said the “major difference” was western Europe enjoying 80 years of peace after World War II, whereas “for us, this is not the case because first we had to live through 50 years of occupation of the Soviet regime, and then slightly more than 30 years of our restored independence.”

“So the memory is still living.”

While some countries believed that an invasion would not happen, she said, “We were providing military support for Ukraine before this invasion started because unfortunately we saw that coming. And other countries did not believe.”

“The problem is we have never very much doubted what we can expect from Russia.”

“The problem was that it always took so much energy in daily political process and in life to convince our allies, because people tend to turn blind eye” if a problem does not affect them directly, he said.

He said this was seen in Latvia’s warnings against the Nord Stream projects as well as “in general, economic ties with Russian oligarchs, with Russian government.” Those pipelines are now leaking in what many experts and Western countries say is likely Russian sabotage.

Urmas Reinsalu, the foreign minister of Estonia told Insider that the world did too little “to deter the monster to keep away from the direct, large scale invasion.”

“From the Western camp, there was a particular ambivalence” about the fighting in eastern Ukraine from 2014, he said, with many pushing to consider it an internal conflict rather than an act of Russian aggression.

Hanno Pevkur, Estonia’s defense minister, told Insider his country had been bolstering its military for years, its eyes open since Russia invaded Georgia in 2008 and starting attacking Ukraine in 2014.

“We saw what Russia was doing,” he said.

He and Šimonytė, the Lithuanian prime minister, pointed to continual Russian cyber attacks as a reminder that Russian aggression is never far away.

Such activity has intensified as the war in Ukraine continued, especially in response to symbolic gestures like Estonia removing a major Soviet-era monument from its capital, Tallinn.

The events of 2022 finally prompted the full-throated moves against Russia that Baltic leaders had long been hoping for, as the UK, EU, and US tore into the Russian economy with sanctions, hammered its financial system, closed its airspace and made life difficult for the country’s elite.

None of the leaders Insider spoke to were interested in blaming their allies for moving slowly — instead urging them to keep going and match the level of support Ukraine was receiving from its own neighbors.

Pabriks put it the strongest, arguing that: “If every European country would give proportionally so much assistance to Ukraine, as for instance, Latvia have been giving, the war already would be over.”