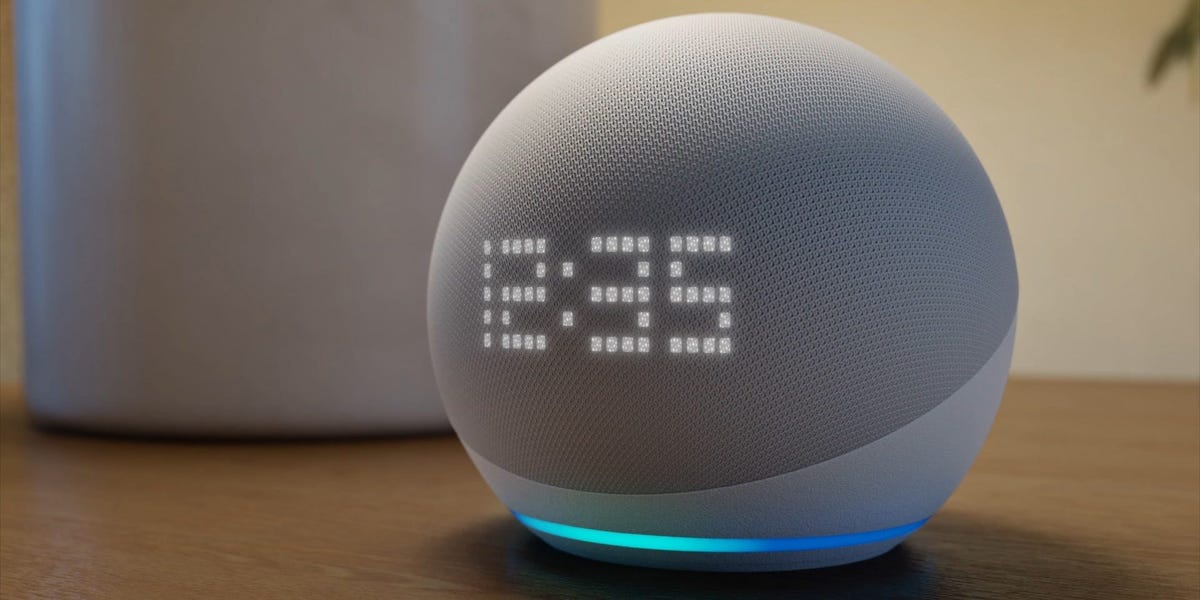 Amazon Echo buying guide: Every smart speaker explained to help find which one is right for you

Amazon continues to expand its offerings of Alexa-enabled smart speakers and displays, ranging from the budget-friendly Echo Dot to the high-end Echo Studio and Echo Show 15.

Beyond serving as Bluetooth and Wi-Fi enabled speakers, Echo devices offer full support for Amazon’s handy voice assistant, Alexa. The Alexa app lets you link and control multiple Echo devices at once, and every model can serve as a hub for other compatible smart home products.

With Alexa, Echo users can set timers and alarms, ask questions, control smart lights and other compatible appliances, and search the web through simple voice commands. An upcoming update will also allow some Echo speakers to serve as Wi-Fi extenders for Amazon’s eero mesh Wi-Fi devices.

To help you decide which Echo device is right for your needs, we’ve broken down Amazon’s full lineup of available smart speakers and smart displays.

How to find great deals on Echo devices

Echo devices are commonly discounted during Amazon deal events like Prime Day and the upcoming Prime Early Access Sale. The entire lineup can often be found for all-time low prices during these special sales.

For example, the standard Echo’s price often dips down close to the regular cost of an Echo Dot during these events. Meanwhile, current Echo Dot models tend to get 50% discounts, which makes them an even better value for budget shoppers.

However, the new fifth-generation Echo Dots set to launch on October 20 haven’t gone on sale yet, and it’s unlikely that they’ll be discounted during the Prime Early Access event on October 11 and 12.

The latest iteration of the Echo Dot smart speaker will launch on October 20. The new model has the same spherical shape and size as the fourth-gen Dot, but boasts significant internal improvements, like twice as much bass, a temperature sensor, and expanded tap controls.

Though the new model carries the same base price as its predecessor, the fourth-gen Dot can be purchased for a lot less during sales like Prime Early Access. We haven’t tested the fifth-gen Dot yet, so it’s unclear how well its new features perform, but based on the specs, we think this new model will be the best fit for buyers who want a compact Alexa speaker that delivers a bit more oomph when playing music.

If you’re willing to spend a bit more, Echo Dot with clock’s display makes it an ideal bedroom or kitchen companion. With this new model on the way, we don’t recommend buying the fourth-generation Echo Dot with clock, as its display is limited to showing the time and alarms.

The fourth-generation Echo Dot is often on sale for less than the newest model, but its sound quality isn’t as good and it’s missing features like a temperature sensor. That said, it’s still a solid entry-level smart speaker that’s good for bedrooms and kitchen countertops.

While we recommend spending a bit more for the newer fifth-generation Dot to get the best audio performance, the older model delivers impressive value when it’s on sale.

Though there are two newer models available, Amazon still sells its third-generation Echo Dot from 2018. The older model has a puck-shaped design and slightly larger footprint compared to the orb-shaped fourth-gen Dot, but it offers similar sound quality and overall features

The third-generation Echo Dot is the cheapest Dot, but the design improvements and upgraded features offered by the fourth- and fifth-generation models are generally worth the extra money. Still, this model remains a good option for buyers who want a basic Alexa speaker on a tight budget.

The fifth-generation Echo Dot Kids adds a fun owl or dragon design to the standard Echo Dot, and includes a one-year subscription to Amazon Kids+, a service that provides books, games, and Alexa skills for children. Amazon Kids+ can also be accessed on other devices like tablets and Kindles. Echo Dot Kids also comes with a two-year warranty that will replace the speaker in case of accidental damage.

Echo Dot Kids only costs $10 more than the standard model, and the extra benefits are definitely worth the price difference if you expect a child to be the speaker’s primary user.

Amazon’s flagship smart speaker is the fourth-generation Echo, which serves as a larger version of the Dot. The Echo is only two inches wider and taller than the Echo Dot, but features dual-tweeters and a woofer compared to the Dot’s single speaker. Given the improved sound quality, the Echo is better suited for use in larger spaces like a living room, while the Echo Dot should suffice for smaller areas like a bedroom or kitchen counter.

In terms of Alexa and smart home capabilities, the Echo also adds support for the Zigbee wireless protocol, which can be more effective than Wi-Fi or Bluetooth when controlling compatible smart home devices.

During Amazon sales events, the Echo’s price tends to drop by as much as 40%. Even when it’s not on sale, the standard Echo is the best option for buyers who want a larger Alexa speaker to fill a bigger room.

The Echo Studio is Amazon’s premium smart speaker, boasting five audio drivers, including a downward firing woofer. That gives the Studio by far the best sound performance of the existing Echo lineup, making it an ideal smart speaker for a home entertainment setup. The Echo Studio is also the only Echo that can support spatial audio and Dolby Atmos, which can create a broader, more realistic soundscape for both music and movies.

The Echo Studio has a mini-optical Toslink input if you have a device that has an optical output, like a smart TV or video game console. The Echo Studio also carries Zigbee wireless support as a smart home hub.

The higher price of the Echo Studio makes it worth comparing to premium wireless speakers from brands like Bose and Sonos. Though most buyers will be satisfied with a standard Echo or Dot, the Studio’s advanced audio performance makes it a good buy for customers who want an all-in-one home theater speaker with Alexa.

Echo Show 5 is the entry-level model in Amazon’s lineup of Alexa-enabled smart displays. In other words, it’s like an Echo speaker with a screen. It delivers all the Alexa features that Echo devices are known for, and it can make video calls and play content from streaming apps like Netflix and Prime Video.

However, compared to the rest of the Echo Show lineup, the Show 5 is a bit basic. It’s the only model without a high definition display, it uses a single speaker, and the camera is only 2 megapixels. Though the Show 5 is solid for the price, unless you’re on a budget, we recommend paying a bit more for the Show 8, which has an HD screen and a much better camera for video calls.

Echo Show 8 has nearly twice the screen resolution of the Show 5, dual speakers, and a significantly better 13 megapixel camera. The eight-inch screen is much better for watching video, and Echo Show 8 will still serve as a smart home hub with support for music and video apps.

Among Amazon’s smart displays, we think the Echo Show 8 offers the best balance between performance and value for the price. This is the best Echo Show model for most people.

Though the screen of the Echo Show 10 is larger, it actually has the same resolution as the Echo Show 8. The real upgrade here is the motion display stand, which can automatically turn the screen to face you while in use. Echo Show 10 also has an additional woofer bringing more bass to the sound quality, and a built-in Zigbee smart home hub system, which the Show 8 lacks.

Though those features are nice to have, Echo Show 10 costs twice as much as Echo Show 8. Ultimately, we think this model is best suited for buyers who think they’ll get a lot of use out of the motion display stand while cooking or multitasking.

The Echo Show 15 is the only model designed to be used in either portrait or landscape mode and is large enough to be wall-mounted. That said, the device’s camera and speakers are actually worse than the Echo Show 8 and Show 10, suggesting that Show 15 is intended for use as a wall display rather than as a countertop device for video calls.

Luckily, it’s not more expensive than the smaller Echo Show 10. Echo Show 15 is an interesting piece of technology but may not be practical for every home. It would be nice to see speakers and a camera that match the quality of the smaller Echo Show devices, but buyers who want something a little bigger that they can hang on their wall should consider it.