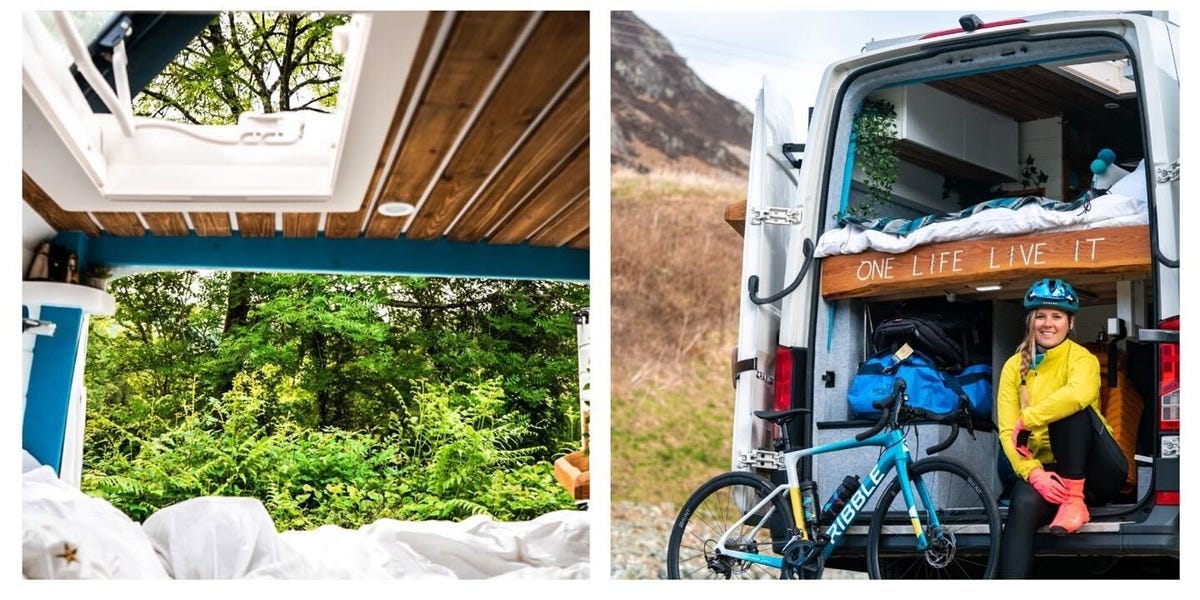 
Athlete, mindset coach, and motivational speaker, Sophie Storm Roberts, runs her adventure athlete business entirely out of a converted van. Roberts' business, Challenge Sophie, involves brands sponsoring her to do athletic challenges or create social-media content.
Roberts' business involves a lot of travel. She told Insider she regularly travels around the country to lead workshops or complete athletic challenges. Roberts said living and working from the van has made this part of the job easier and boosted her creativity.
However, running a business out of a van comes with some challenges. Roberts said that when converting her van, it was important she found ways to nurture her creativity while also staying connected to the outside world.
Transforming her van into a mobile living and working space meant a serious renovation job. "I wanted to use the van to run my business," she said. "But it meant I needed to adapt the space."
Roberts said managing the limited space in the van was vital to her productivity. She added that she didn't want to feel like she was on top of herself or working from her bed.
Roberts installed adaptable seating to make use of the space. "Both the seats next to the driver's seat swivel round," Roberts said. "So there's actually seating for five people in my van."
Roberts said she also installed a skylight to ensure the van didn't feel dark. "Natural light keeps me connected to nature," she said. "We wanted to feel like we had brought the natural world in."
Solar panels installed on the roof of the van also keep her connected to the outside world. "The solar panels mean that I can plug my laptop in and power it off the sun, which is a pretty cool feeling," she said.
The roof is another way Roberts utilizes the space in her van. The van features a ladder leading up to the roof and a custom-built panel to sit on. She said she often sits there with her morning coffee or a book when she's having a break.
But van life isn't always easy. Roberts said the process had been an adjustment. "I think it can definitely feel lonely or isolating at times," she said.
Roberts said the small space also means that she has to be extra organized and tidy. "A lot of time is taken up organizing and worrying about everyday tasks," she said. "Things that when you're living in a house that you wouldn't even think twice about."
Read the original article on Business Insider