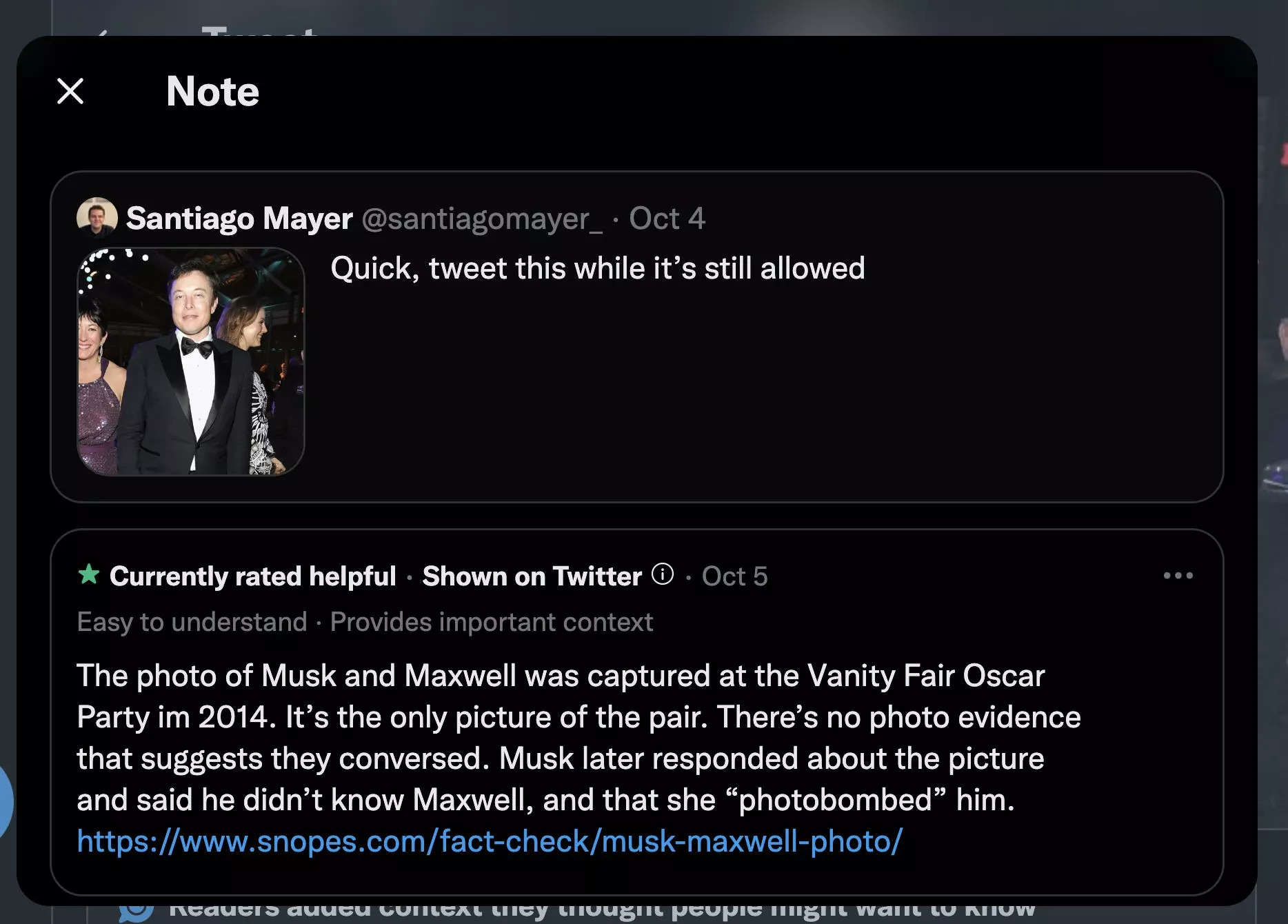 
Twitter just rolled out a new feature in the US that can tag tweets with context notes, and an old photo of Elon Musk and Ghislaine Maxwell that’s been widely shared in the past is among the first to be flagged.

A tweet featuring the photo has a note at the bottom that says, “Readers added context they thought people might want to know.”

“The photo of Musk and Maxwell was captured at the Vanity Fair Oscar Party im 2014,” the context reads. “It’s the only picture of the pair. There’s no photo evidence that suggests they conversed. Musk later responded about the picture and said he didn’t know Maxwell, and that she ‘photobombed’ him.”

It’s followed by a link to the fact-checking website Snopes for a story with the headline “Is the Elon Musk and Ghislaine Maxwell Photo Real?”

The note is part of a new Twitter feature intended to help suppress misinformation called Birdwatch, which rolled out to all Twitter users in the US on Thursday. Now, all users will be able to see visible notes, though not everyone can add or vote on them.

The notes appear with a tweet after they’ve been voted on as “helpful” by Birdwatch users. Birdwatch contributors are limited for the moment to “a small test group in the US” during the pilot program. Twitter says that the “eventual goal is to expand the program to the global Twitter community…”

People can apply to join Birdwatch, though, under certain criteria. For instance, users must have a valid phone number and no recent Twitter violations.

Insider tested the feature by tweeting the photo to see if the note would automatically appear with other tweets after it’s been flagged elsewhere, but no note was included. Insider reached out to Twitter for clarification, but did not immediately receive a response.

The photo of Musk and Maxwell was widely shared on Twitter after the billionaire Tesla CEO said in April that he had offered to buy Twitter for $44 billion (after a months-long legal fight in which he tried to back out of the deal, Musk offered to buy the company again this week at his original bid).

In June, Maxwell was sentenced to 20 years in prison after being found guilty of sex-trafficking girls for Jeffrey Epstein.

Sources told Insider in 2020 that Epstein introduced Musk’s brother, Kimbal Musk, to a woman in his entourage in order to get close to Elon and his businesses. Kimbal and the woman dated from 2011 to 2012, and Epstein had received a tour of Elon’s company SpaceX in 2012, Insider reported (SpaceX later denied to Insider that Epstein toured SpaceX, and Musk denied it on Twitter).