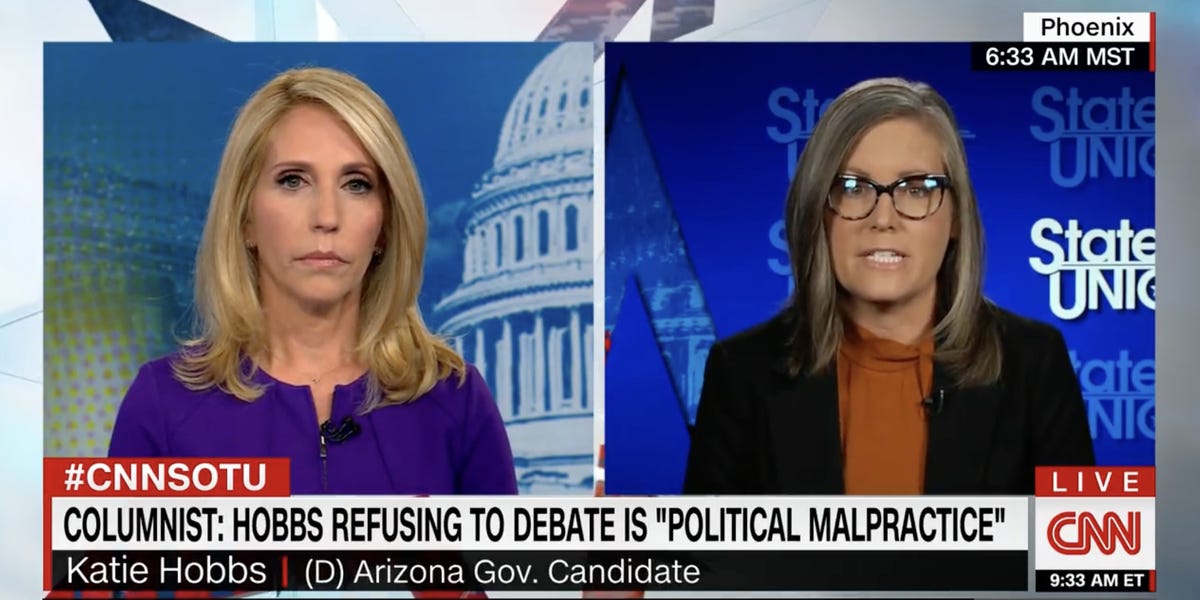 Arizona gubernatorial candidate Katie Hobbs defends her refusal to debate Trump-backed GOP rival Kari Lake, who she says is ‘only interested in creating a spectacle’

The move has been criticized by Democrats who have maintained that Hobbs should have debated Lake, a Trump-endorsed candidate who routinely pushes debunked claims about voter fraud.

On CNN’s “State of the Union” on Sunday, host Dana Bash asked Hobbs about her decision, quoting an opinion piece by The Arizona Republic’s Laurie Roberts, who wrote that “Hobbs’ refusal to debate her opponent on Wednesday represents a new level of political malpractice.”

“Why won’t you debate her?” Bash asked Hobbs.

“Look, Kari Lake has made it clear time and time again that she’s not interested in having substantive, in-depth conversations about the issues that matter to Arizonans. She only wants a scenario where she can control the dialogue, and she’s refused to sit down in a one-on-one, lengthy conversation to really clarify with Arizonans where she is on the issues. She’s the one who’s afraid of talking to voters where she’s at,” Hobbs said.

Hobbs had previously appealed to change the planned debate to separate, moderated interviews for both candidates, but her request was denied by the local elections commission, 12NEWS KPNX previously reported.

After a back-and-forth between the candidates, the elections commission, and the venue, Hobbs will get an interview on PBS that wasn’t originally planned while Lake, who issued an ultimatum to PBS and its owner Arizona State University, will not get an interview, 12 NEWS reported.

“I guarantee you that when Arizonans who are struggling, when they go to open their ballot, when they’re thinking about the fact that they’re not sure how they’re going to put food on the table, they’re rationing their insulin, or they’re thinking about having to drive their niece or their sister or their daughter to California to get the health care that they need, they’re not going to look at their ballot and say, ‘Damn it, Katie Hobbs didn’t debate her opponent,'” Hobbs told CNN on Sunday.

Bash countered that Lake sat for an interview with CNN on Sunday morning shortly before Hobbs’ interview.

“A lot of Democrats are questioning your decision, and they’re saying it’s the wrong decision,” Bash said. “If you think she’s as dangerous as you’re saying to democracy, is it your responsibility as a candidate who wants to run Arizona to show and explain who their alternative is?”

“That is exactly what I’m doing right now,” Hobbs replied. “There is a lot more ability to have a conversation with you without her interruptions and shouting to do that. And, yes, she did sit down with you. She’s refused to do that with any legitimate reporter in the state of Arizona and take her case directly to the voters. She’s only interested in creating a spectacle.”

Hobbs added that Lake has “centered her entire campaign around” debunked claims of mass voter fraud in the 2020 election.

“This is disqualifying. This is a basic core of our democracy, and she has nothing else to run on,” Hobbs said.

A representative for the Kari Lake campaign did not immediately respond to Insider’s request for comment on Sunday.