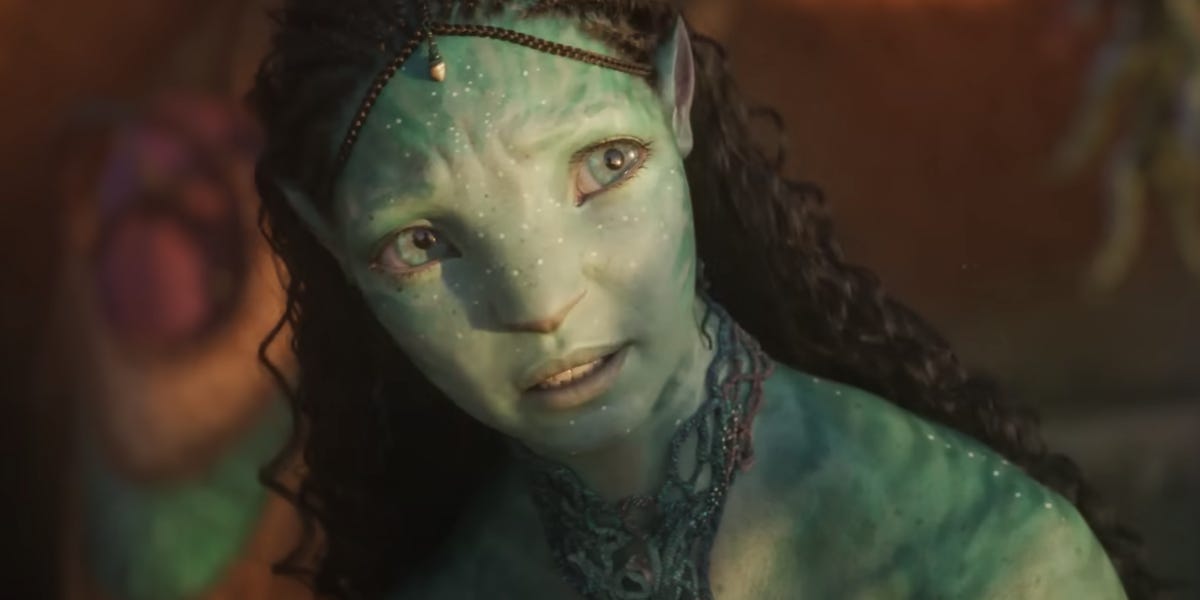 
“Avatar: The Way of Water” comes to theaters this December, 13 years after the first movie broke box-office records.

There’s a reason it took so long. During the Busan International Film Festival on Thursday, producer Jon Landau said the cutting-edge technology required to make the sequel only recently became possible.

“We could not have delivered what people saw today, five years ago, eight years ago, nine years ago,” he said after showcasing 15 minutes of footage. “We needed the time to take it to the level that we’re able to deliver to people today.”

Director James Cameron, over video call, elaborated on the technological improvements he’s bringing to “The Way of Water,” and described the high frame rate “hack” he’s using to improve the 3D experience that elevated the original movie.

“We’re using [high frame rate] to improve the 3D where we want a heightened sense of presence, such as underwater or in some of the flying scenes,” Cameron said. “For shots of just people standing around talking, [high frame rate] works against us because it creates a kind of a hyper realism in scenes that are more mundane, more normal. And sometimes we need that cinematic feeling of 24fps (frames per second).”

Most theaters don’t have the capabilities to handle the different frame rates necessary for “The Way of Water.” But Cameron found a cheat.

“Can theaters support variable frame rate, switching back and forth within the movie between 24fps and 48fps? The answer is no, they just run it at 48fps,” Cameron said. “In any part of the scene that we want at 24fps, we just double the frames. And so, they actually show the same frame twice, but the viewer doesn’t see it that way. And so, we’re essentially using a simple hack to use the high frame rate platform that already exists.”

Cameron’s “hack” could avoid the kind of divisive audience reaction that the last major film to toy with high frame rate received. Director Peter Jackson wanted to shoot “The Hobbit” at 48fps rather than the industry standard of 24fps to present a sharper image. But it was met with mixed reviews.

“Everything takes on an overblown, artificial quality in which the phoniness of the sets and costumes becomes obvious, while well-lit areas bleed into their surroundings, like watching a high-end home movie,” Variety wrote at the time.

“Avatar” kickstarted a 3D trend after it became the biggest movie of all time, with $2.9 billion worldwide (and counting, thanks to a recent re-release). But many movies are converted in 3D in post-production rather than filmed with 3D digital cameras, like “Avatar.”

Cameron has previously said that 3D is a normal part of the theater experience now, thanks largely to “Avatar.”

“I think around the time of ‘Avatar,’ people used to go to see movies because they were in 3D,” Cameron told Slashfilm in an interview in September. “I think it had an impact on how films were presented that’s now just sort of accepted and part of the zeitgeist and how it’s done.”

Movie-theater leaders have high hopes for “The Way of Water,” as the industry is still struggling to rebound from the pandemic, largely due to a lack of releases.

“‘Avatar 2’ will be, technologically, the movie that offers the most choices for consumers [this year], John Fithian, the head of the National Association of Theatre Owners, told Insider earlier this year. “It will have the options of high frame rate, high dynamic range, 3D, premium large formats, and every combination of the above.”