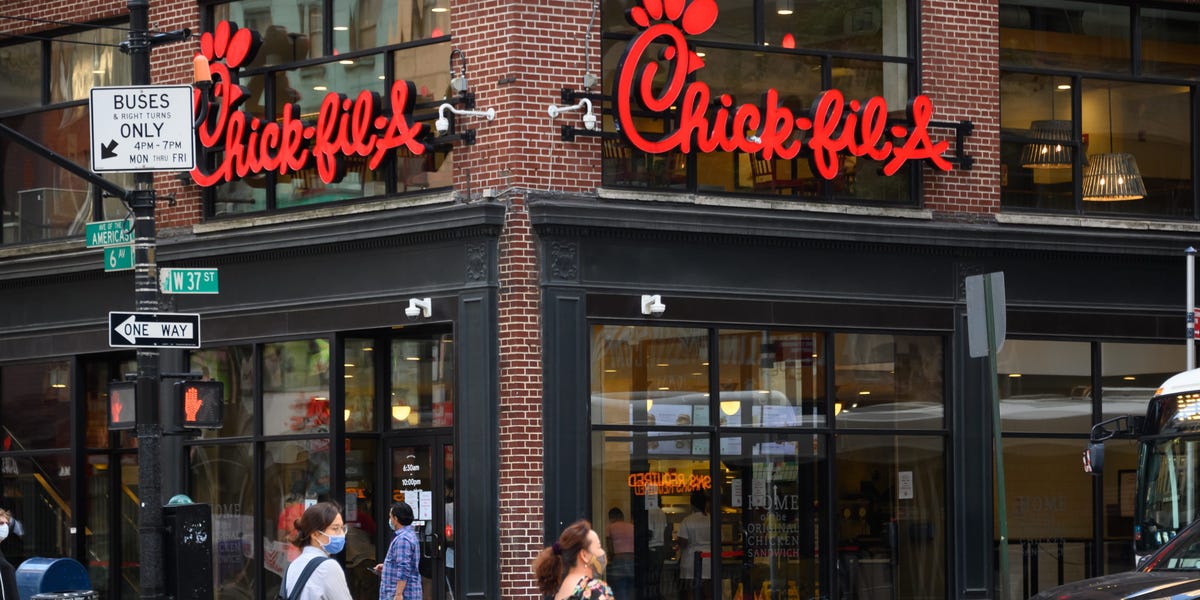 The investment bank’s “Taking Stock with Teens” report tracks their brand preferences, behavior, and habits. In the latest study, 14,500 teens were surveyed.

Fast-food chicken restaurant Chick-fil-A was ranked by 15% of respondents as their favorite restaurant, the same as in the spring 2022 and fall 2021 surveys.

Read on to find out the top five restaurant chains where teens prefer to spend their money.

Chick-fil-A’s popularity has reigned supreme over the years.  In 2019, Insider asked more than 3,000 readers of our fast-food coverage to tell us their favorite chains. Chick-fil-A dominated, with the best food, best customer service, cleanest restaurants, and best bathrooms in American fast food, according to readers.

Chick-fil-A ranked third-highest in sales among chain restaurants in the US in 2021, just after McDonald’s and Starbucks, according to The NPD Group’s 2022 restaurant report. The company also swept the top spot for the eighth consecutive year in the 2022 American Customer Satisfaction Index Restaurant Study.

Chick-fil-A could be popular with teenagers for several more reasons, perhaps because of its well-balanced sweet tea, as one Texan found, though that same Texan found Chick-fil-A’s chicken fingers underwhelming compared with two other Southern-based chains. And while the restaurant chain may have what a study showed as the slowest drive-thrus, it’s for a reason: It’s so popular that there are just too many cars waiting in line — for more than eight minutes a time.

Both Chick-fil-A and Starbucks are working on addressing “line balk” by adding drive-thru lanes to break up bottlenecks and using handheld devices to take orders, Insider reported. Chick-fil-A has even rolled out a fleet of autonomous robots to deliver meals in California, Texas, and Florida.

“The autonomous vehicles have been instrumental in growing awareness of delivery at my restaurant, allowing us to reach even more customers in the area,” said Luke Steigmeyer, the operator of a Chick-fil-A in Austin, Texas, in a press release.

Founded in 1946, Georgia-based Chick-fil-A has over 2,700 locations across the US, Puerto Rico, and Canada. The family-owned company, which says it’s built on and guided by Christian values, is best known for its chicken sandwiches and being closed on Sundays to stay in line with Christian faith.

It’s perhaps ranked consistently high because it does well in producing “indulgence and nostalgia” especially for young men, Insider reported.

Chick-fil-A has supported youth initiatives, committing millions of dollars to education, youth entrepreneurship, and financial literacy, and partnering with and donating proceeds to Covenant House in New York and New Jersey to prevent youth homelessness.

“It is our pleasure to support the advancement of students throughout the communities that Chick-fil-A serves,” Rodney Bullard, Chick-fil-A’s vice president of Corporate Social Responsibility, said about its education initiatives.