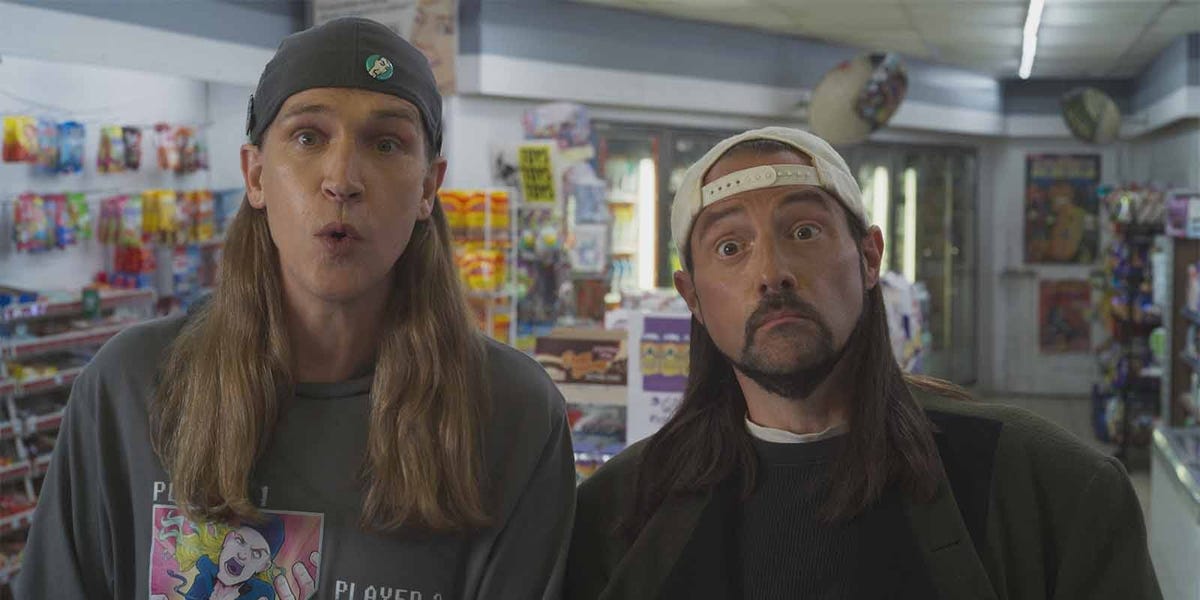 Kevin Smith’s 1994 indie hit “Clerks” has spawned a whole connected-universe of comedy spinoffs and sequels. The latest entry in the series is “Clerks 3,” which brings the franchise back to where it all started.

The new movie picks up with our titular clerks, Dante (Brian O’Halloran) and Randal (Jeff Anderson), 15 years after the events of “Clerks 2.” When Randal suffers a heart attack, he decides to make a movie about his time working with his friends at the Quick Stop convenience store. The movie also stars Marilyn Ghigliotti, Rosario Dawson, Trevor Fehrman, and Jason Mewes, and features appearances by Ben Affleck, Amy Sedaris, Fred Armisen, and more.

Check out the trailer for ‘Clerks 3’

“Clerks 3” is part of Kevin Smith’s “View Askewniverse” series of connected movies that all share characters and events — kind of like the Marvel Cinematic Universe but for stoner comedies. The series is tied together by frequent appearances by Jay and Silent Bob, a comedic duo played by Jason Mewes and Smith, respectively.

“Clerks 3” was released in theaters on September 13, and special screenings are being held as part of a roadshow tour through November. The film made its online debut on October 14.

You can now buy “Clerks 3” to watch at home from digital retailers like Amazon, Vudu, and Apple TV. The movie currently costs $15 to purchase in up to 4K quality.

Once you buy “Clerks 3,” you can stream it whenever you like with no limitations. If you prefer to own a physical copy of the film, you can buy it on Blu-ray starting December 6. It’s likely that a digital rental option will also launch by that time.

Apps for digital retailers are available on most smart TVs, media players, mobile devices, and gaming consoles from major brands. Be sure to check each retailer’s website to ensure that your device is supported.

Is ‘Clerks 3’ worth watching?

“Clerks 3” currently holds a “63% Fresh” score on Rotten Tomatoes based on 117 reviews. Though some reviewers dislike the film for being uneven, most critics praise its surprisingly heartfelt and personal story.

Fans of Smith’s previous “Clerks” movies and his other View Askewniverse flicks should be pleased by this latest entry.

Where can I watch Kevin Smith’s other View Askewniverse movies?

Most of Kevin Smith’s “View Askewniverse” series of connected comedies are available to watch online through Showtime ($11/month). That said, there is one notable exception: “Dogma” is not currently available to stream or buy digitally on any service.

Here’s where you can watch the other View Askewniverse movies from Kevin Smith:

Steven is a Tech Editor for the Insider Reviews team, where he oversees streaming and home entertainment product coverage. He previously served as High-Def Digest’s Gear Editor from 2013 to 2019, and his work has appeared on Ben’s Bargains, Steve’s Digicams, Big Picture Big Sound, and Consequence of Sound.
Over his nine years of experience covering the audiovisual industry, Steven has reviewed numerous TVs, headphones, speakers, monitors, streaming players, and more. He was one of a select number of journalists invited to get a hands-on first look at LG’s first 8K OLED TV in 2019, and is always excited to check out the newest and biggest displays on the market.
Based on his extensive experience in the home theater industry, Steven served as one of the expert judges for the 2018 TV Shootout, the premier annual display competition that crowns the best TVs of the year. Steven also has a background in film criticism, having reviewed over 400 movies and TV shows. He uses his movie industry knowledge to help inform his coverage of the streaming and home entertainment markets.
Steven’s own home theater setup makes his passion for entertainment clear, complete with a 65-inch HDR display and the biggest Dolby Atmos speaker system he can fit in his apartment. And though he often spends his free time binging new series on every streaming service under the sun, he remains proud of his huge collection of Blu-ray discs.
See below for some of his work.