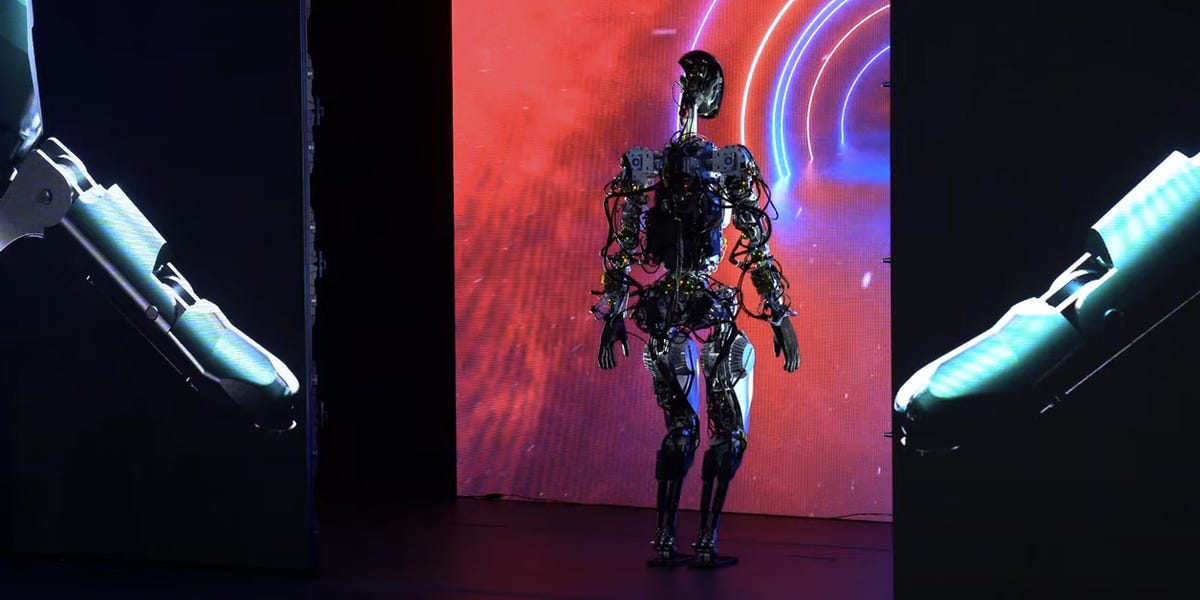 As Elon Musk unveiled a prototype of Tesla’s Optimus bot, he promised the humanoid would one day change the way people live and work — but some experts are less optimistic.

AI researcher Filip Piekniewski told Insider the robot “doesn’t stand out from other similar projects” after tweeting that Tesla’s AI Day last month was “next level cringeworthy” and a “complete and utter scam.” Meanwhile, Melonee Wise, VP of Robotics Automation at Zebra Technologies, said the device appeared “well behind” other tech companies, including Boston Dynamics.

“There is nothing particularly surprising about it and every company with sufficient budget could put together similar demo in a few months,” Piekniewski said.

Piekniewski said the robot doesn’t “stack up against the claims made by Elon Musk” that it will revolutionize the work environment. Musk has said the bots could eventually replace factory workers and could even serve as caregivers.

But Piekniewski cast doubt on those claims. “Robots don’t have anything even remotely close to a brain,” he said. “Yes, you can get them to perform simple tasks and exhibit superficial levels of situational awareness, but it takes just one detail to be out of what is expected and the robot will quickly descend into a series of mistakes that will typically end with unrecoverable disaster.”

Davide Scaramuzza, director of the Robotics and Perception Group at the University of Zurich, said the robot demonstration was “better than expected,” but only because last year Tesla revealed its plans for a humanoid robot with a man dressed up in a robot costume.

This year, at Tesla’s second annual AI Day a prototype of the Optimus bot walked slowly onto the stage and waved to the audience. Musk said it was the first time the bot had walked “without any support.” The billionaire also presented another prototype that looked closer to production, but it had to be wheeled on stage by several workers.

“The robot can actually do a lot more than we showed you, we just didn’t want it to fall on its face,” Musk told spectators. He promised the bot will one day cost less than $20,000 and said the carmaker hopes to start taking orders for it within the next three to five years — both plans experts said are feasible, but depending on your expectations for the robot.

“Building a robot to be used in the real world is much more difficult than most may think,” said Dennis Hong, a engineering and robotics professor at University of California Los Angeles. “I do not believe we will have humanoid butler robots that can do the dishes, take out the trash, and do our grocery shopping anytime soon. But starting with something much simpler, I am cautiously optimistic.”

A demo video at the event also showed the bot picking up and carrying boxes in Tesla’s Fremont, California, factory as well as watering plants.

Christian Hubicki, a robotics professor at Florida State University, and Scaramuzza, the professor at the University of Zurich, both told Insider the live demonstration seemed heavily scripted and controlled. Cynthia Yeung, head of product at Plus One Robotics, said the bot was either pre-programmed to run the routine or tele-operated.

“If the objects would be moved by an inch, the robot would not be able to grasp them anymore,” Scaramuzza said, noting he believes Tesla is more than a decade away from a robot that could perform better than a human worker.

The Optimus bot did stand out in one way, according to several experts — its hands. Animesh Garg, a professor of AI Robotics at the University of Toronto, called the bot’s hands “impressive.” Hubicki noted the superior dexterity of the robot’s hands could give the humanoid robot an advantage on other robots like Boston Dynamics’ Atlas when it comes to gripping “smaller and more complex objects.”

Meanwhile, Jonathan Aitken, a robotics professor at the University of Sheffield, called Tesla “well-placed” to use its Full Self-Driving navigation technology to advance robotics.