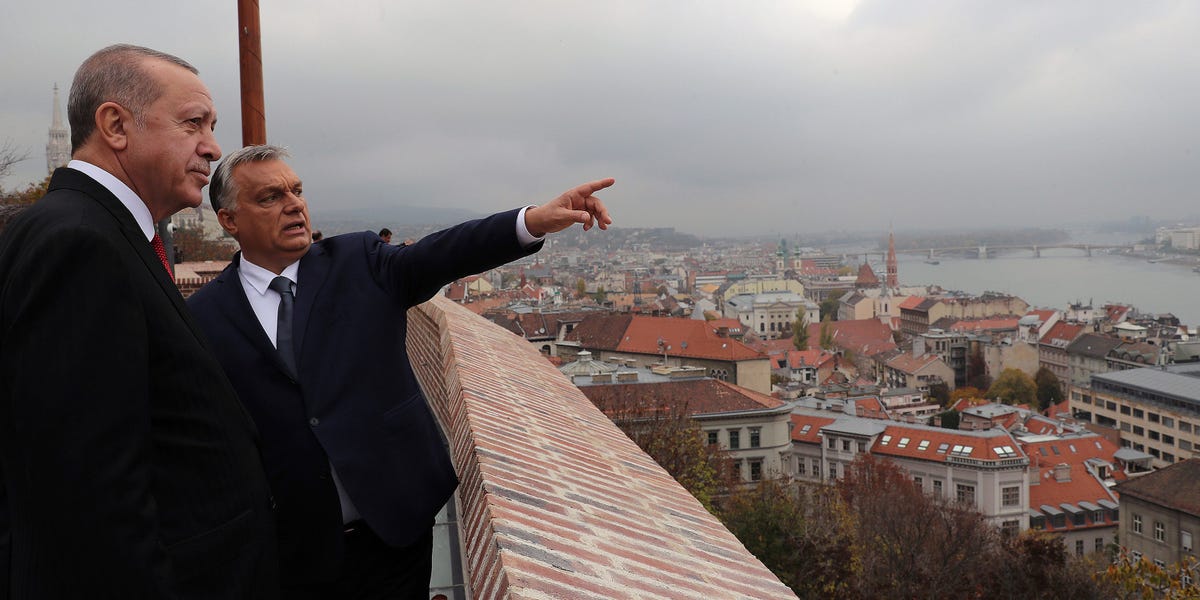 Finland and Sweden’s bids to join NATO in the wake of Russia’s invasion of Ukraine have been met with widespread approval since the alliance formally invited the two Nordic countries to join.

Hungary and Turkey, however, have yet to sign off on adding new members to the alliance and are instead purposefully holding up proceedings.

One former ambassador told Insider the US and its allies need to bring Hungarian Prime Minister Viktor Orbán “to his senses” as the increasingly authoritarian leader and Turkish President Recep Tayyip Erdoğan continue to delay the process with their own ambitions in mind.

Both leaders have tried to leverage their own strategic interests in exchange for approving what would be a major expansion of the NATO alliance, interests like security guarantees or pleasing other heads of state.

“My question,” he continued, “is why neither the United States or others in the alliance are making a bigger effort to bring Orbán to his senses. He would understand if he was talked to in the right manner, which means clearly and tough, but I don’t see that happening. ”

Orbán is ‘testing the limits’ of NATO

Finland and Sweden — two countries that have historically been militarily nonaligned — submitted their applications to join NATO in May, in a move triggered by Russia’s brutal invasion of Ukraine. In June, the 30-member military alliance formally invited Finland and Sweden to become new members.

Still, national parliaments in each member country need to approve new memberships since NATO expansion requires unanimous consent. More than three months later, lawmakers in 28 of the 30 countries have ratified changes to the treaty and approved the expansion.

But Hungary and Turkey are holding out, something both signaled previously they would do.

Simonyi said Hungary hasn’t given its approval because Orbán is sending a “couple of messages” to the alliance, among them that he doesn’t want to be taken for granted or hear any external criticism.

But there’s another reason that should not be underestimated, Simonyi said, arguing that there’s “no doubt” Orbán is trying to please Russian President Vladimir Putin. “[Putin] loves the idea that he has a buddy inside NATO who is his spoiler, who makes things difficult,” he added.

In holding out on approving NATO expansion, Orbán is “testing the limits, and he will go as far as he can. But he’s not an idiot. He would understand if the limits were clearer — if the limits were set more clearly,” Simonyi said, adding that it’s “surprising to me how the rest of the alliances is not doing anything to push back.”

Hungary’s ties with the European Union have been strained by Orbán’s close relationship to Putin, as well as his hardline stance on Hungary’s press, academic institutions, judicial system, and immigration. Last month, European Union lawmakers even voted to declare that Hungary is no longer a democracy and is instead “a hybrid regime of electoral autocracy.”

“That is the bizarre part of it. He’s the guy who brought Hungary into NATO, and he knows how difficult it was,” Simonyi said, recalling standing next to Orbán when Hungary’s flag was first raised at NATO’s headquarters in Brussels after the central European country joined the alliance in 1999.

“Frankly, those days, he did a great job in support of the United States,” Simonyi said. “And honest to God, I would never have thought that he would turn his back on America.”

Still, Simonyi said he believes Orbán will eventually sign off on NATO expansion, but the timeline may depend on his Turkish counterpart.

Alper Coşkun, who is the former director general for international security affairs at Turkey’s foreign ministry and who also served as the country’s ambassador to Azerbaijan, told Insider that there doesn’t seem to be a sense of urgency on the Turkish side.

“The fact of the matter is in this case, Turkey has leverage over Sweden and Finland,” Coşkun said in a recent interview.

Among the issues at play is security. Turkey has accused the Nordic countries of supporting militant groups that it considers to be terrorists and wants greater support in fighting against those groups. Turkey also wants the two countries to extradite alleged members of such groups and has firmly opposed their embargoes on arms exports. And recent commentary made about Erdoğan on Swedish state TV has led to some additional tension between the countries.

There are also domestic political considerations, Coşkun said, explaining that Erdoğan could portray any agreements or concessions from Finland or Sweden — or even from the larger NATO alliance — as an achievement in the rup-up to the country’s June 2023 presidential elections.

Though some concessions have been made to clear the way, some roadblocks still remain.

“I think Sweden and Finland joining the alliance is in Turkey’s security interests,” Coşkun said, adding that the two countries have traditionally supported Turkey’s bid to join the European Union. “At the end of the day, I think overall it’s in Turkey’s interest to find a reasonable way out without prolonging it too much.”

The two Nordic countries would provide the NATO alliance with a significant boost to its overall military capabilities across all domains — air, land, sea, and with intelligence. Beefing up such capabilities could come at a time when it faces a more aggressive Russia, though one which has not appeared as formidable in its war with Ukraine as it was once thought to be.

Finland and Sweden would also help to “stabilize” NATO, Simonyi said, because they are both strong and mature democracies, as opposed to transitional democracies that may backslide in the future.

“I think what is happening now is we’re fixing an unnatural situation,” Simonyi said of NATO enlargement. “It’s a real pity we did not do it in peacetime. And it’s a real pity that it occurs because there’s a war going on in Europe.”