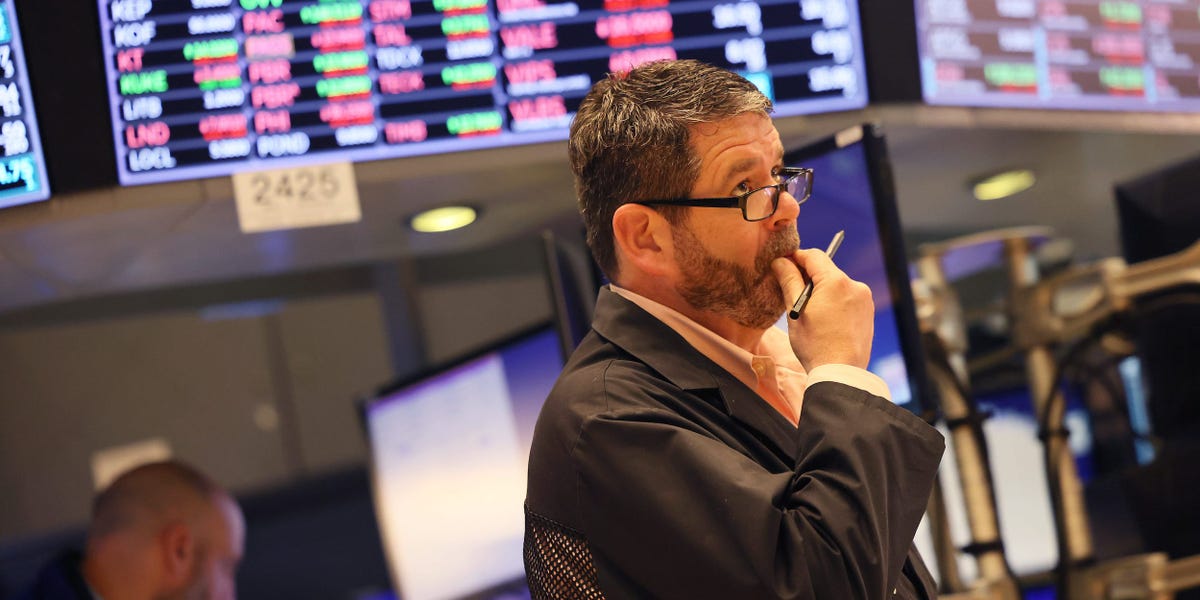 Friday’s jobs report signaled the labor market is still hot — probably too hot for the Fed — and that means stocks could be headed for new 2022 lows this month.


Good morning, readers. Hallam Bullock here, reporting from London after a wet and windy walk into the office. The forecast for stocks this month is equally bleak, according to Bank of America.

But before we get into that, congratulations to former Federal Reserve Chair Ben Bernanke, Douglas Diamond, and Philip Dybvig, who were awared the Nobel Prize in economics Monday.

Now then, hoist your umbrellas, zip-up the raincoats, and let’s talk about those gray clouds on the horizon.


Traders work the floor of the New York Stock Exchange during morning trading on May 05, 2022 in New York City. Stocks opened lower this morning after closing high on Wednesday after the Federal Reserve announced an interest-rate hike by half a percentage point in an effort to further lower inflation.

1. US stocks are poised to make a new low in October, according to Bank of America’s Michael Hartnett.

The projection came after Friday’s strong US jobs report, which showed fewer people are unemployed than analysts had expected. The unemployment rate fell to 3.5%, while the US created 263,000 new jobs in September, beating the average estimate of 250,000 payrolls.

Although this sounds like good news — in these strange economic times, it isn’t. Low unemployment means that the economy is still running hot, and that’s driving inflation higher. Therefore, the jobs report only bolsters the Federal Reserve’s view that policymakers need to continue to hike interest rates to soften the economy and tame inflation.

Despite a near 25% year-to-date decline in the S&P 500, Hartnett sees more room to fall. For example, he noted Tesla’s market cap is the same as the entire European banking sector, and that US equities as a percentage of the MSCI World Index just hit a new record high of 66%.

There is just one question for investors, Hartnett says: “hard landing or soft landing in 2023; we say hard landing.”

Are stocks heading for new lows? Let me know at hbullock@insider.com or tweet @hallam_bullock

2. US stock futures fall early Monday. Meanwhile, the Bank of England announced it would step up daily bond purchases and boost liquidity to banks. Here are the latest market moves.

4. The manager of Fidelity’s $22 billion Magellan Fund shared the best advice he learned from his legendary predecessor Peter Lynch. It’s Sammy Simnegar’s job to maintain the fund’s sterling reputation that was garnered under the renowned Lynch. With such big shoes to fill, here are seven pieces of advice Lynch gave Simnegar.

5. Russian oil exports fell to their lowest level in a year, according to data from S&P Global. In a sign that Moscow may be struggling  ahead of Western plans for a price cap on Russian crude, the country is leaning more on Asian buyers. Read more here.

6. Amid the dollar’s towering strength, South Korea double-downs on its defense of its currency. South Korea’s government will take steps to boost the supply of US dollars in local currency markets, as the won has fallen 18% against the dollar already this year.

7. “Bond King” Bill Gross warned the Fed against raising interest rates. Gross rang the alarm on the amount of US debt and other economic headwinds, saying central bank hikes could spark a credit crunch and global depression — here’s why.

8. Why bitcoin’s investment case is the “most challenged” it’s been in years, according to an ex-Point72 portfolio manager. Travis Kling, the chief investment officer at crypto asset management firm Ikigai, says traditional equities and crypto are too coupled for bitcoin to be an inflation hedge. Instead, he broke down the bull case for ethereum.

9. Goldman Sachs says these stocks have the most upside right now. October is historically the most volatile month for stocks, so more market swings may be ahead. With that in mind, Goldman Sachs listed 40 stocks that were the furthest below their analysts’ price target right now.

10. Shares in top Chinese chipmakers tumbled Monday. It comes after the US brought in sweeping new export controls limiting sales of semiconductors built using US tools, which threatens to hold back China’s development of advanced tech.