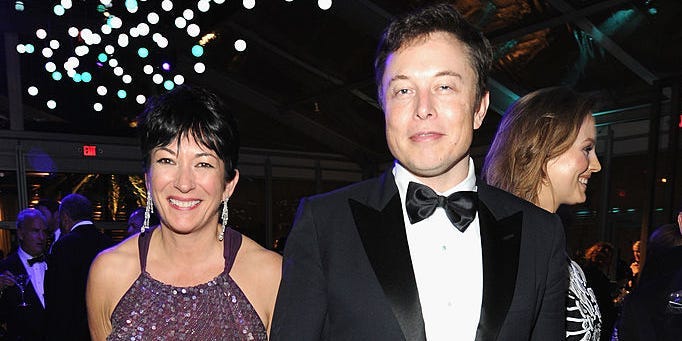 Elon Musk’s picture with Ghislaine Maxwell may have been more than a photobomb after all.

The photo was taken in 2014 at the Vanity Fair Oscar Party in California, but it didn’t make a splash on social media until 2020, when Musk took to Twitter to say he didn’t know Maxwell “at all.”

“She photo-bombed me once at a Vanity Fair party several years ago,” he tweeted in July 2020. “Real question is why VF invited her in the first place.”

But, the story seems slightly more complicated, according to a recent report from The New York Times. When the photograph was taken, Maxwell asked Musk if there was a way to delete information about oneself off the internet, the Times reported on Tuesday. Maxwell also told the Tesla CEO she wanted him to destroy the internet, a Vanity Fair worker who was standing next to the pair told The Times.

The staffer, who chose to remain anonymous due to potential repercussions, said the pair also discussed aliens and Musk brought up his theory that reality could be a simulation.

Musk did not respond to a request for comment from Insider ahead of publication.

The photo of the billionaire alongside Maxwell, a known associate of Jeffrey Epstein, was widely shared on Twitter earlier this year as well after the billionaire initially offered to buy Twitter for $44 billion in April.

It showed up on Twitter again last week, only this time with a new context note as part of Twitter’s new feature Birdwatch, which aims to curb misinformation on the platform by inviting users to vote on helpful context.

A tweet featuring the photo had a note at the bottom that said: “The photo of Musk and Maxwell was captured at the Vanity Fair Oscar Party im 2014. It’s the only picture of the pair. There’s no photo evidence that suggests they conversed. Musk later responded about the picture and said he didn’t know Maxwell, and that she ‘photobombed’ him.”

Nearly a week later, though, the note is gone. Twitter confirmed to Insider that a context note can be removed from a tweet if its “helpful” status changes. Context only appears with a tweet if enough Birdwatch contributors with opposing viewpoints vote on it as “helpful.”

Only a select test group of Twitter users can submit and vote on context right now, but everyone in the US can see the notes.

In June, Maxwell was sentenced to 20 years in prison after being found guilty of sex-trafficking girls for Epstein.

In 2020, Insider reported that Epstein introduced Musk’s younger brother, Kimbal Musk, to a woman in his entourage in order to get close to the Tesla CEO. Kimbal and the woman dated from 2011 to 2012, and Epstein had received a tour of Elon’s company SpaceX in 2012, sources told Insider. At the time, SpaceX denied Epstein received a tour and Musk also said on Twitter that Epstein never toured SpaceX “to the best of our knowledge.”

Read The New York Times’ full story on its website.