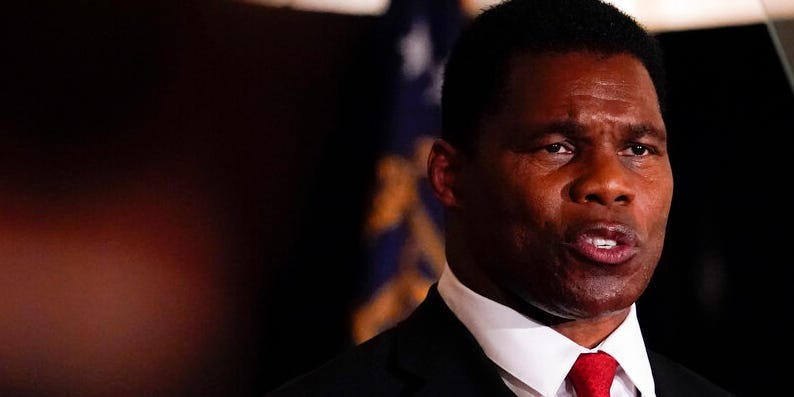 In a debate with incumbent Senator Raphael Warnock on Friday, GOP candidate Herschel Walker, in violation of debate rules, pulled out a “prop” police badge to push back against reports that he’d lied about working in law enforcement.

While discussing their reputations working with law enforcement, Warnock noted Walker’s past false claims of serving as a police officer, prompting Walker to flash the badge.

“One thing I have not done — I have never pretended to be a police officer,” Warnock said, referencing claims Walker made throughout the 2000s that he received a law enforcement certification and had been trained by the FBI. “And I’ve never threatened a shoot-out with the police.”

“I am work with many police officers,” Walker said in response while holding up the badge, prompting criticism from the moderator for violating the debate rules against candidates having “props.”

The Associated Press reported in February that Walker had threatened to shoot officers during a 2001 domestic disturbance, one of many scandals which have plagued the Georgia candidate’s run for Senate. Walker has also been found to be exaggerating about his college performance despite never graduating, lied about how many children he has fathered, and despite his pro-life stance reportedly paid for his ex to get an abortion.

“I worked for law enforcement, y’all didn’t know that either?” Walker said in a 2019 motivational speech, The Atlanta Journal-Constitution reported. “I spent time at Quantico at the FBI training school. Y’all didn’t know I was an agent?”

The Atlanta Journal-Constitution reported the only known law enforcement title Walker has held is an honorary deputy status with Cobb County Police Department, though a former district attorney said the title grants the holder “absolutely no law enforcement authority” and is “like a junior ranger badge.”

After Friday’s debate, in an interview with NewsNation, the Trump-endorsed Senate candidate walked back his prior claims that he had his “FBI clearance” and worked as a “certified peace officer.“

“I said I worked with law enforcement, which I have,” Walker told NewsNation, displaying the badge from Johnson County he had held up earlier. “I never said I went out to do anything, but I have worked with every law enforcement around the county.”

It is unclear whether Walker’s badge is official or an honorary title akin to the one he had from Cobb County.

Representatives for Walker did not immediately return Insider’s request for comment.