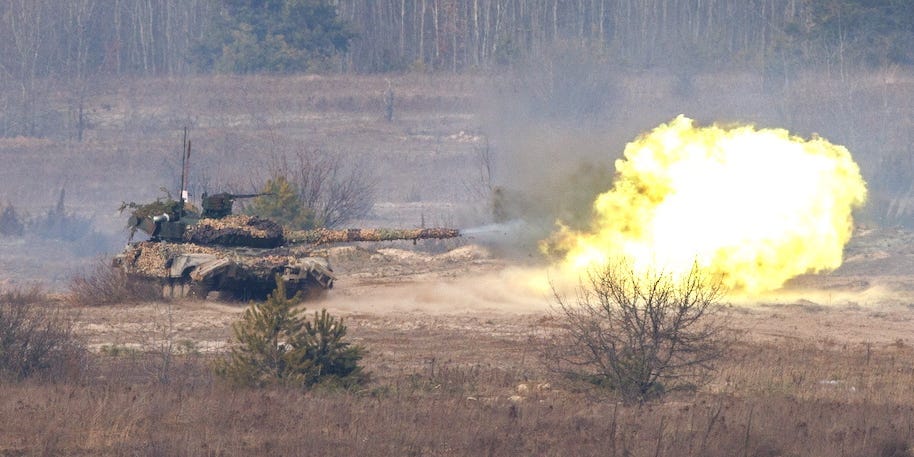 The T-64 tank was developed and built in Ukraine’s second city of Kharkiv during the 1960s.

It was a Soviet super tank pioneering a variety of unprecedented technologies, including an autoloading 125mm main gun, a smaller three man-crew, sophisticated composite armor, and the capability to fire anti-tank missiles from its main gun.

The secrecy-shrouded T-64 outmatched most NATO tanks In the 1960s and 70s. However, the costly design was never exported outside the Soviet Union, which instead incorporated its innovations into the cheaper T-72 tank. You can read more about its Soviet origins and technical innovations in this companion piece.

After the fall of the Soviet Union, Kyiv inherited 2,300 T-64s. It decided to keep only its latest T-64B tanks in service, and it put T-72 and T-80s into storage for eventual sale abroad.

This resulted in the new Kombat gun-launched laser-guided missile, which could penetrate 750 mm to a range of 3.1 miles, and the Nozh explosive reactive armor, which was designed to degrade even kinetic shells and survive longer when sustaining multiple hits. You can see how Nozh works below.

Ukrainian firms also developed more sophisticated Duplet reactive armor and the Zaslon active-protection system to shoot down incoming anti-tank missiles. However, these systems were mostly exported, and it’s unclear whether either is currently operational on Ukrainian tanks.

However, Nozh reactive armor, Kombat missiles and indigenous analogs of the T-64’s armament (the KBA-3 gun and KT machine guns) were incorporated into the modernized T-64BM Bulat (formerly the T-64U) and a successor design called the T-84 Oplot, detailed in this older article.

Ukraine’s arms industry also tinkered with schemes to convert T-64s into heavy troop carriers, and with a T-64E tank carrying a twin-barrel 23 mm autocannon to supplement the main gun, but none of these novelties entered production.

When Russia invaded the Crimean Peninsula in 2014, Ukraine’s military retained around 900 T-64s in storage and 786 T-64Bs in operational units. These included the 1st and 17th Tank Brigades — each with 93 tanks divided among three tank battalions — as well as supporting battalions of 40 tanks in its eight mechanized infantry brigades.

Ukraine’s Marine Corps also had 41 T-64BV tanks in Crimea that were seized by Russia, only to be returned in June.

As Russian-backed separatists began seizing cities in the eastern Donbas region of Ukraine, T-64s led Kyiv’s counteroffensive, though their effectiveness was reduced by a tendency to spread out the tanks to individually defend checkpoints and escort convoys.

Meanwhile, separatists managed to field around 20 T-64s furnished by Russia or captured from Ukraine. Two were disabled by Ukrainian Hind helicopters on June 12 in the Savur-Mogila region. Four more struck at Ukrainian forces northwest of Slovyansk on June 26, knocking out four APCs for one lost tank, while others saw action in a failed assault on Bakhmut.

Kyiv’s mechanized forces were defeated in a succession of battles at Ilovaisk, Debaltseve and Donetsk airport, losing over 300 T-64 tanks in the process, the majority abandoned outside of combat during retreats.

City combat saw T-64s destroyed by infantry who ambushed from an angle to hit weaker side, top, and rear armor. But reportedly 75%-80% of T-64 combat losses came from artillery (howitzers, mortars and Grad rockets), not from direct fire by enemy tanks or anti-tank missiles.

Still, the T-64 proved it could do its job — at least when in mechanically reliable condition. Malfunctioning guns rendered ineffectual all but one Ukrainian T-64 in a failed counterattack at Kominternovo that nonetheless staved off a Russian offensive on Mariupol.

But in an engagement at Logvinova on February 12, 2015, three Bulat tanks from the 1st Tank Brigade covering an attack by the 30th Mechanized dispatched a like number of Russian T-72s in a 20-minute engagement, while withstanding several hits in return.

The 2014-2015 war highlighted the T-64’s strengths and its flaws. Nozh armor proved effective, with some T-64s requiring eight hits to knock out using portable anti-tank weapons. However, the individual armor tiles weren’t designed to be repaired or replaced in the field, thus requiring factory refitting or improvised welding on the frontline.

The use of unstable, expired shells made T-64s more prone to explode when penetrated, and their light undercarriage proved vulnerable to mines and rough terrain. The BM2 and to a lesser extent the Bulat proved underpowered and prone to overheating.

Kyiv began rebuilding and expanding its armored forces, withdrawing from storage retired T-72 and T-80 tanks as well as more T-64s. Ukraine could upgrade multiple T-64BVs for the price of a single new T-84 or Bulat, so it focused almost exclusively on upgrading the former, while exporting the latter to Thailand to generate income.

Thus Kyiv instead focused on the more affordable T-64BV model. Its 2017 modernization was implemented at the Kharkiv and Lviv armor plants, replacing the tank’s Luna spotlight in favor of a modern second-generation TPN-1MSW thermal sight.

This was followed by a heavily modernized command model, the T-64BVK model 2021, which featured a trio of digital radios with a combined range of 310 miles, an auxiliary power unit, modern day/night thermal imagers, a rearward-looking camera, and armor reinforcements to fuel tanks and sides.

A few weeks prior to Putin’s 2022 invasion, the Kharkiv plant began testing the T-64BV model 2022. This incorporated most of the command model’s enhancements, as well as a new shielded, higher-velocity Laska K-2 12.7 mm machine gun, a third-generation infrared sensor, and NATO-compatible radios.

Another program, the T-64 Crab, sought to merge technologies form the Bulat, T-64BV model 2017, and T-84, but the project progressed too slowly.

Redesignated as the T-64BM2 Bulat, 10 of these tanks would be deployed into combat, defending Kharkiv as part of the 72nd and 92nd Mechanized Brigades.

By the eve of Putin’s 2022 invasion, the Ukrainian military had roughly 850 T-64s in service, including around 100 in its National Guard and Marine Corps. The T-64 remained the standard equipment for Ukraine’s regular 1st and 17th tank brigades, while T-72s were allocated to new Reserve Tank Brigades.

Most Ukrainian regular infantry brigades include a tank battalion, except for airborne brigades, which have a tank company.

The T-64’s age leaves it with some disadvantages against the latest Russian tanks: These include a slow reverse speed, a problem when backing away from threats; lack of thermal sights on non-upgraded T-64BVs; and underpowered engines on all but Bulat tanks, despite increased weight.

At long range, the Mango round may struggle to penetrate the frontal armor of Russia’s most modern tanks, some of which boast kinetic armor equivalent to 600-700 mm or even more.

However, in 2022 penetrating power and power to weight ratio has proven less decisive than sound combined arms tactics, and being first to spot an adversary and accurately engage it.

But contrary to the US Army maxim that “a tank is the best way to kill a tank,” Ukraine employed armor asymmetrically against infantry and lighter armored vehicles, while artillery, anti-tank missiles and abandonment accounted for most of the over 1,000 tanks lost by Russia.

In one remarkable incident during the battle of Kyiv filmed by an overflying drone, a lone T-64 can be seen ambushing a large Russian armored column streaming through a village, shooting through a house for concealment, knocking out a wheeled BTR-82 APC and forcing the column to dismount infantry. Whether the lone T-64 escaped is unclear.

Meanwhile, T-64BVs and Bulats of Ukraine’s 1st Tank Brigade, supported by territorial defense infantry, held back Russian forces attempting to capture Chernihiv, the northeastern gateway city to Kyiv. They held out for weeks while cutoff from resupply until Russian forces withdrew in early April.

Then while fighting raged in the Donbas region in May, T-64s of the 17th Tank Brigade helped stomp out multiple attempts by Russia to cross the Siverskyi Donets river with pontoon bridges.

In one incident, T-64s sortied to push back a substantial Russian force back into the water. Afterward, photos show the loss of 80 Russian vehicles ranging from tanks to trucks, along with two knocked out Ukrainian T-64BMs.

T-64s also were seen in action carrying out overwatch fire in the boulevards of Mariupol, and sniping at Russian forces in Kherson province using indirect fire.

Use of tanks as artillery is hardly unprecedented, although now T-64s are increasingly using drone spotters to accurately hit and destroy Russian armored vehicles from beyond line-of-sight.

Ukrainian T-64 losses have been considerable, though they are less well documented than Russia’s. As of mid-September, the Oryx website visually documented the following number of lost T-64s.

Undoubtedly, many more have gone unrecorded.

The T-64 also plays an important role for Russia’s separatist forces in Donetsk and Luhansk, which began the war with well over 100 T-64As and T-64Bs in service.

In the spring and summer, separatist T-64s squeezed Ukrainian forces in the urban battles of Mariupol (video here) and in Rubizhne, a suburb of Severodonetsk.

Photos show the destruction of 29 separatist T-64BVs and two T-64As, and the capture or abandonment of seven T-64BVs. However, separatists have also received captured Ukrainian T-64s to replace their losses.

The Kharkiv plant also converted at least six obsolete T-64A tanks by removing their guns and installing KTM-7 mine rollers for use at the head of armored columns. One of these rammed a BMP-2 in combat during the Kharkiv offensive, leading to its capture.

The overriding lesson from tank warfare in Ukraine — one established during the World Wars, but seemingly doomed to be repeatedly forgotten — is that tanks must be employed in mutually supporting combined arms teams with infantry, reconnaissance, and artillery support.

Russia’s infantry-starved army has fallen afoul of this problem more frequently than Ukraine’s. Instead, the most successful armor breakthrough of the war occurred in Ukraine’s September Kharkiv offensive, in which a so-called “tank fist” supported by paratroopers penetrated Russian lines to capture the key rail juncture of Kupyansk.

In the long term, Kyiv hopes to receive heavier Western Abrams and/or Leopard 2 tanks to modernize its armored forces. But for now and into the foreseeable future, the T-64 remains Ukraine’s mainstay tank, a national champion from its Soviet past called to defend Ukraine in its hour of need.

Sébastien Roblin writes on the technical, historical, and political aspects of international security and conflict for publications including The National Interest, NBC News, Forbes.com, War is Boring and 19FortyFive, where he is defense-in-depth editor. He holds a master’s degree from Georgetown University and served with the Peace Corps in China. You can follow his articles on Twitter.