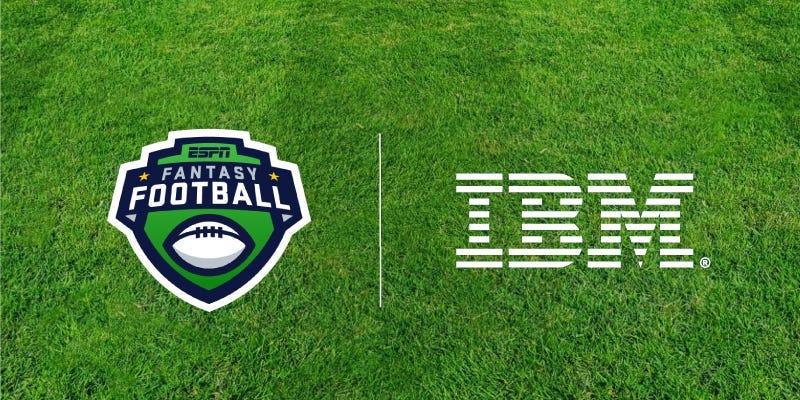 By Noah Syken, Vice President of Sports and Entertainment Partnerships at IBM

For the last six years, IBM has been working with ESPN to infuse AI-generated insights into its fantasy football platform. But we needed someone who could help us tell the story — someone who could grab the attention of fantasy football enthusiasts, introduce them to the artificial intelligence of Watson, and encourage them to embrace the era of data-driven decision making. So we asked a guy that has a lot in common with IBM: Eli Manning.

Let me explain. Back in 2016, IBM formed a partnership with ESPN. In this relationship, we use IBM’s advanced analytics and AI capabilities to analyze the massive amount of data produced by fantasy football. We then serve up insights that help guide the roster decisions of ESPN’s fantasy football users. Today, those insights take the form of two features:

IBM is in the fantasy football business for two reasons. First, we’re solving a very real business problem for a valued partner. Fantasy football is a critical form of digital engagement for ESPN, and one that requires constant innovation to stay ahead of the competition. And Watson’s insights make the platform more fun and engaging.

The second reason is that ESPN Fantasy Football offers IBM a powerful platform to demonstrate our AI capabilities to 11 million people. Both Trade Analyzer and Player Insights are produced by transforming vast quantities of data into insights that inform decision-making. We’re analyzing the performance statistics of all 1,900 players in the league. But the numbers don’t always tell the whole story. So we’re also using the natural language processing capability of Watson Discovery to mine insights from millions of blogs, articles, and podcasts produced by media experts. Last year alone Watson served up more than 34 billion AI-powered insights to ESPN fantasy players.

When Eli Manning joined the New York Giants back in 2004 as the number one pick in the draft, many Giants fans thought he would be the second coming of Joe Namath: a big star in the big city. But Manning was more subtle than that. There were no flashy fur coats or movie-star girlfriends. Just an understated, workman-like grit that produced two championships.

So what does that have to do with IBM? It has been 17 years since IBM sold its ThinkPad business to Lenovo. That was the last time our iconic “eight-bar” logo appeared on a consumer-facing device. But despite this lack of visibility, our work has never been more consequential than it is today. It’s not flashy, but our technology and expertise support the operation of the most mission-critical systems on the planet: electrical grids, airlines, telecommunications networks, banks, government services, and many others.

Technologies like hybrid cloud and AI are powerful, complex, and often difficult for people to comprehend. They operate behind the scenes, in data centers and back offices. But they are critically important to our clients and the world. That’s why we showcase the work of IBM Consulting through partnerships like the Masters, the US Open, and ESPN’s Fantasy Football. And that is why Eli Manning is helping us tell our story.

Learn more about how IBM and ESPN are working together to bring data-driven insights to fantasy football.

This post was created by IBM with Insider Studios.