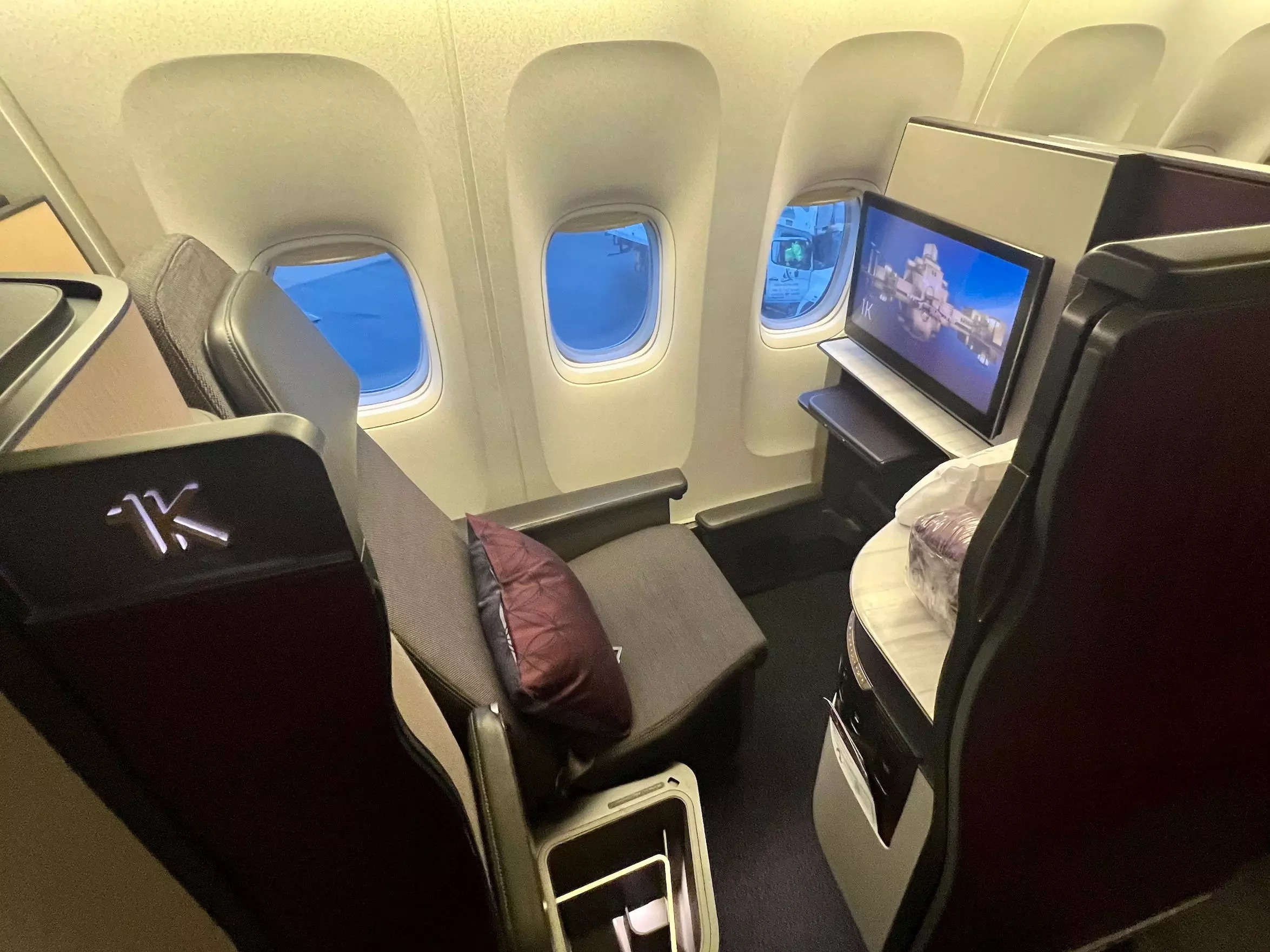 The carrier, which has won seven times since the awards started in 1999, was praised for its exceptional onboard product, customer service, cleanliness, and food.

The QSuite-equipped aircraft fly several routes between the US and Doha, like from New York-JFK, Los Angeles, Chicago, and Dallas/Fort Worth, trekking over 14 hours nonstop.

I toured the QSuite on Qatar’s Boeing 777-200LR at New York-JFK, which was painted in a special FIFA livery — take a look

The revolutionary QSuite has been in service since June 2017 and is a major upgrade from its old business class product, which is seen on its A330s and several 777s.

The old cabin is configured in a 2x2x2 layout, meaning window-seat passengers do not have direct aisle access, and there is less privacy between neighbors.

Like the 787 business class, QSuite is configured in a 1x2x1 configuration, meaning all passengers have direct aisle access.

But, instead of angling the seats, most of the QSuite seats all face forward. Though some seats face backward, which could be a strange feeling for travelers.

However, there is a retractable wall between the loungers that face each other, creating a quad-style seating arrangement.

The layout is perfect for dining together, watching FIFA Football, or having business meetings.

…a coat hook and reading light…

…a plush pillow and bed linens…

…a spacious storage unit beside the seat…

…and plenty of legroom. I’m 5’3″ but most passengers should easily fit into the seat.

Trying out the lie-flat capabilities, I found the padding very comfortable, and at 6’7″ long, the bed is easily long enough to fit taller travelers.

I liked the various way to adjust the seat, which could be fully upright or reclined…

Travelers will also get a nice set of pajamas and slippers for optimum comfort.

My only complaint about the cabin is that it felt a little packed when standing on the outside of the seat, likely because of how high the walls and privacy doors are.

But, once inside, the cocoon is cozy and comfortable.

After hearing about the cabin for years and finally seeing it in person, I see why people are forking out thousands for the QSuite.

The unique quad seating is a huge plus, particularly for business travelers, and the privacy doors are important to deep-pocket customers.

Hopefully, one day, I’ll travel in the coveted QSuite to see if it truly lives up to the hype.