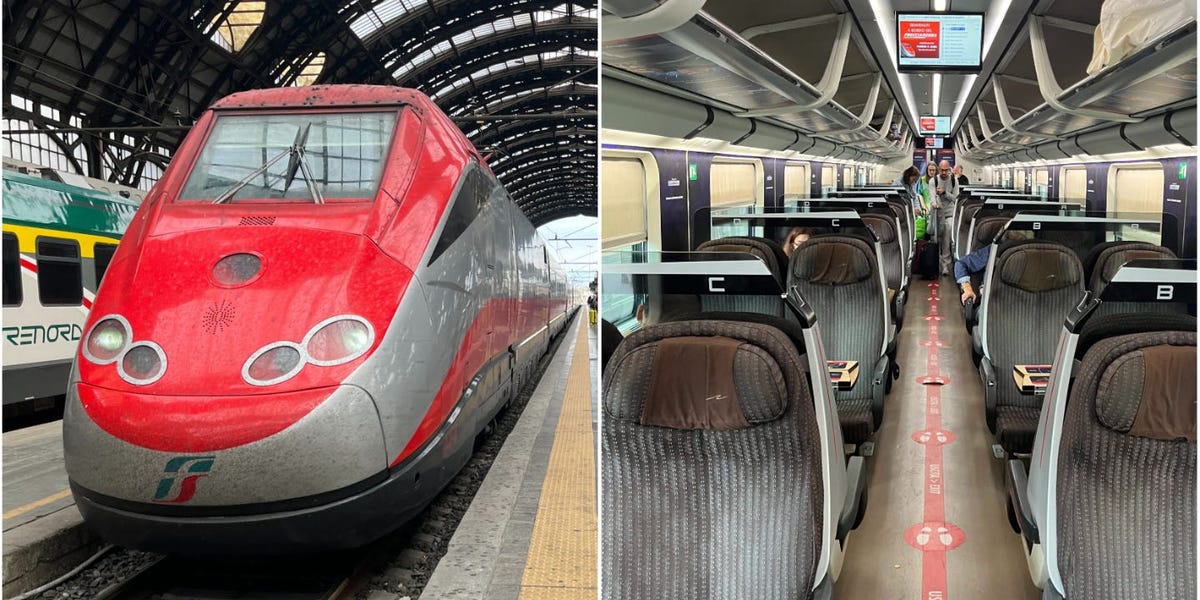 I booked a seat on the Frecciarossa ETR 500 from Milan to Turin for £12.46, or about $14. This journey would have taken nearly two hours with regional trains, but it took only 58 minutes on the Frecciarossa.
I started my journey at the Milano Centrale railway station, which opened in the 1930s. Thousands of people pass through the station on a daily basis.

At least five Frecciarossa trains were displayed on the information board in the station between 11:30 a.m. and 12:25 p.m.
Once I passed the ticket barriers, I walked to the platform. I didn't have to wait long before the train arrived. I could see how the Frecciarossa, which translates to "red arrow," got its name.
The train had 11 coaches. Executive class was at the front, and standard class, where I was booked, was toward the back.
The long, air-conditioned train carriages were spacious, and most seats had a table. I liked how the seats were separated by screens, but I wasn't a fan of the brown interior.
I sat in a backward-facing seat with a table that folded back, providing more legroom. The carriage had a Buzz Lightyear theme, showcasing the movie "Lightyear." Aside from Italian, I didn't hear another language on the train. It was fairly empty when I was on board.
One of the best features in the carriages were screens that showed the speed and location of the train, a map, and the weather. The maximum speed the train reached on my journey was 297 kph.
I got a sense of the Frecciarossa's speed when it darted past cars and trucks on the highway. The concrete foreground was a real contrast with the scenic background of the Alps and rice fields.
One fun aspect of the Frecciarossa was the screen showing live footage of the view from the front of the train. The camera was dirty, though, making it hard to see.
The seats were quite uncomfortable because their backs curved inward. I wouldn't have wanted to sit in one for more than an hour.
Not long after the train left Milan, a staff member walked down the aisle with a cart of drinks and snacks. Every now and again there were announcements in Italian and English — notably explaining how to make a complaint about the journey.
There were some quirky features aboard the Frecciarossa, including buttons on the edge of tables that you could press to operate the blinds.
At each table was a handy power outlet. But it wasn't very stable, and my charger kept falling out. The Frecciarossa provided free WiFi, but it didn't work.
Between the tables and the windows were small trash bins. I'm not sure they were needed, considering the staffers seemed very attentive — one picked up lots of stickers on the floor around my seat.
Passengers could store luggage in the large overhead racks or in suitcase compartments at the end of the carriage.
The restrooms were slightly bigger than those on airplanes. There were two between each carriage. What stood out to me was how clean they were compared with other train toilets I've seen.
I arrived in Turin, in northwestern Italy, just in time for lunch.
I thought that for $14, the journey on Frecciarossa ETR 500 was a bargain. The train almost reached 300 kph, getting me to another major Italian city in under an hour. I appreciated this, along with the onboard features including the screens, the charging points, and the foldable tables, which made my experience more enjoyable.
Read the original article on Business Insider