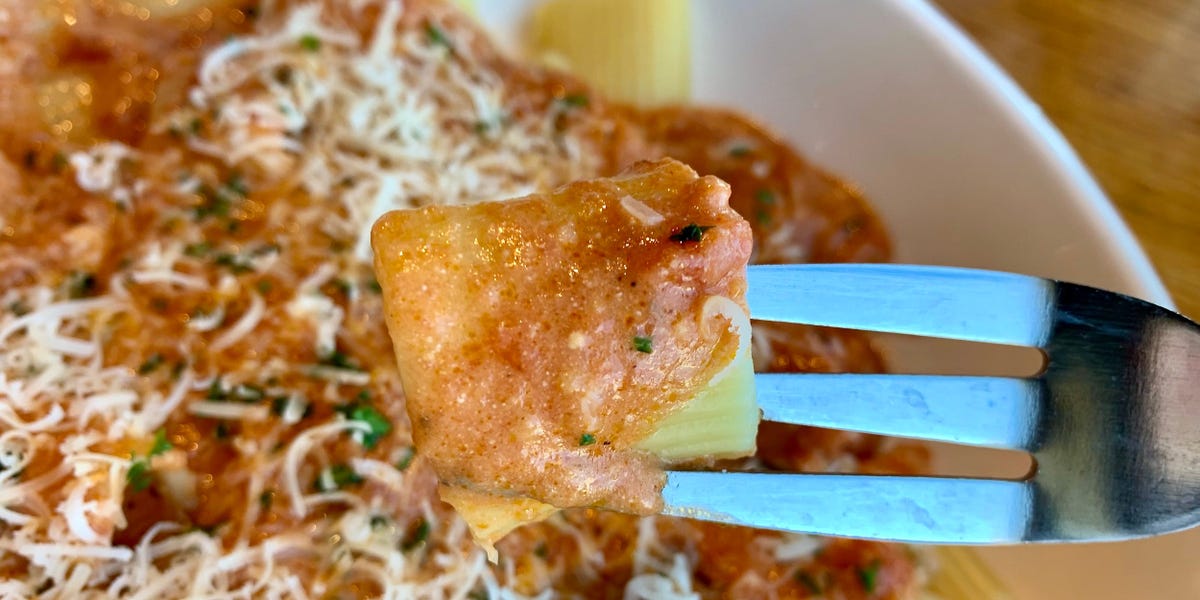 
Olive Garden just brought back its famous Never Ending Pasta Bowl promotion on October 3.
For $13.99, you can get unlimited pasta in combinations of your choice, and add protein for another $4.99
Ricardo Cardenas, the CEO of Olive Garden's parent company Darden Restaurants, told investors in September that consumers making less than $50,000 per year were spending less at the restaurant.
The chain has historically brought the deal back when sales are low to draw customers into restaurants, with it last available in 2019.

I visited my local Olive Garden to try the iconic promotion, and see if it was really worth the elevated price, which was up nearly 30% over last time it was offered.

It was lightly decorated for fall, with pumpkins outside and leaf garlands inside.
Because the deal is only available through November, it wasn't on the regular menus but it was prominently advertised on every table.
The Never Ending Pasta comes with a choice of soup or salad.
I can never pass up a chance to eat the chicken gnocchi soup, topped with cheese.
It was delicious as always, but an extremely heavy start to what I knew would be a large, carb-heavy meal.
The salad is definitely a smarter choice, to leave room for plenty of pastas.
It comes in a family size bowl and can be topped with piles of cheese too, so it's still possible to fill up too early.
Then, more carbs come with the breadsticks.
As usual, they're warm, slightly greasy, and delicious.
You can also get dipping sauce for the breadsticks, which are included…
…but in my opinion it's a bit pricey at $5, and you can always dip breadsticks right in your pasta sauce.
For my first round of pasta I got rigatoni with five cheese marinara, of course topped with more cheese.
After starting with soup and breadsticks, I realized it was going to be difficult even to finish this plate.
I wanted to see how the promotion stacked up with protein, so my fiance got fettuccine Alfredo with crispy chicken for the other Never Ending Pasta order.
It was another huge bowl of pasta, with a moderate amount of chicken.
I got about two-thirds of the way through my rigatoni when I started really flagging.
At this point the waitress brought more breadsticks and let us put in orders for our next bowls, before we finished the first.
The bowls for the second servings are much smaller than the first, probably about one-half the amount of food.
I still had my first bowl on the table, so I could compare them head to head.
The sausage serving was impressively hearty though, especially compared to the amount of pasta.
I chose to go simple with spaghetti and meat sauce.
I took a few bites to be a good sport, but at this point I was uncomfortably full.
Our server seemed to anticipate we would tap out here, and she asked us if we'd like to pack up our meals.
She packed up what were two nearly entirely uneaten meals for us, lunch for tomorrow.
There was a bag specifically for breadsticks, which I was happy to take home.
At $13.99 for an order, or $19 with meat, it's a moderately priced meal over all.
Next time, though, I would probably just order the create your own pasta.
The Never Ending Pasta Bowl is $1 more than the create your own dish, but if you wanted to add meat you can save around $3.
The Never Ending promotion could offer significant savings, if you can actually eat multiple bowls of pasta after soup or salad and breadsticks.
That's a tall order for almost anyone, though.
While I did get an extra meal, I left so full I didn't even want to look at pasta for at least 24 hours, though I felt obligated not to waste my leftovers.
That was after I ate significantly more than I would have otherwise, because I felt like I needed to get my money's worth on the deal.
I have no plans to reorder the Never Ending Pasta Bowl, but it must be drawing people in because the restaurant was packed.
It's not worth it unless you are prepared to eat a truly prolific amount of pasta, and probably feel horrible afterwards.

Do you have a story to share about a retail or restaurant chain? Email this reporter at mmeisenzahl@businessinsider.com.