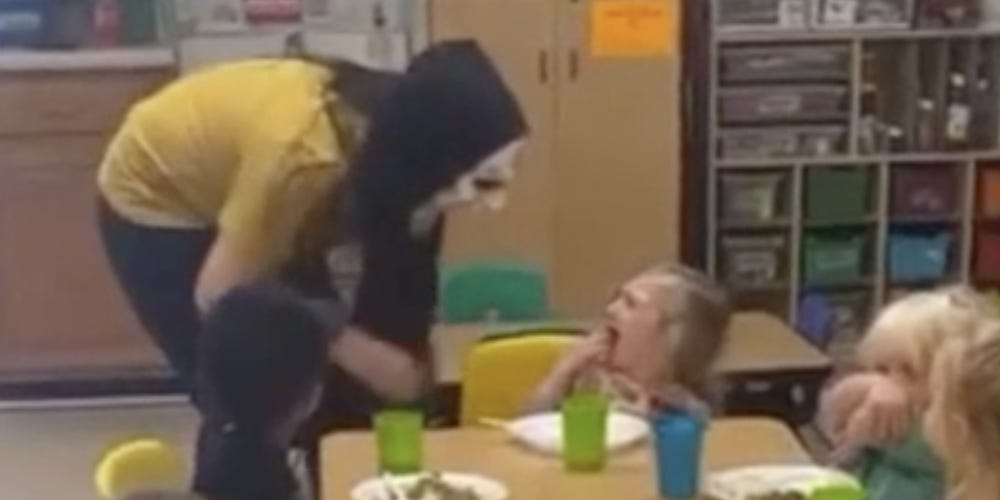 ‘I’m not a child abuser’: Daycare worker apologizes after being fired for terrorizing children with a ‘Scream’ mask

A Mississippi woman who said she was fired for wearing a “Scream” mask to scare children at the daycare where she worked, later shared a tearful apology online.

On Wednesday, apparent videos of the woman — known only as CeeCee — in a Halloween mask taunting toddlers just inches from their faces circulated widely on social media, leading to her firing from Lil’ Blessings Child Care & Learning Center in Hamilton, Mississippi, along with three coworkers.

In the video, the children can be seen crying and hiding from the woman as she chases them, but in an apology video obtained by the Daily Mail apparently posted by CeeCee later, she says it wasn’t “ill-intentioned.”

Although CeeCee acknowledges that she is the person behind the mask in each video, she claims that her coworkers were aware of her plans to scare children who were being “bad.” A total of four employees were fired as a result of the stunt, according to a local newspaper.

“The teachers asked me if I would do it or if they could use (the mask) to get their class to listen or clean up. I’m not a child abuser,” she says in her apology.

CeeCee had been employed at the daycare for nearly four year before her termination. At least one worker can be seen laughing in the videos.

“I did not go in there at my own discretion. As in, I didn’t go in there with the intention to literally traumatize those children. I expected them to react the way they reacted when I did it,” she says in the apology.

“But what you all didn’t see was after I had left the room, I took it off and I went back into the classroom… and I said ‘CeeCee got the monster. It’s not coming back.’ And they would hug me. I’ve known those kids their whole life.”

Although the viral videos were met with outrage, some parents said they don’t blame facility owner Sheila Sanders for the incidents.

“I know 100% that Ms. Sheila, the owner and director, was not aware of this situation that was going on and as soon as she found out, all parties were terminated immediately,” Kimberly Smith, a parent of one of the terrified children, told the local newspaper.

Sanders, who’s owned the daycare for the past 20 years, said she wasn’t aware of the incidents until Wednesday afternoon and one video was taken as early as September.

“No one came forth to tell me it happened in September,” she told the newspaper.

“The people that did those acts are no longer with us. They were fired. I wasn’t here at the time and wasn’t aware they were doing that. I don’t condone that and never have. I just want to say it’s been taken care of.”

The Mississippi State Department of Health and the Monroe County Sheriff’s Office are investigating the matter.