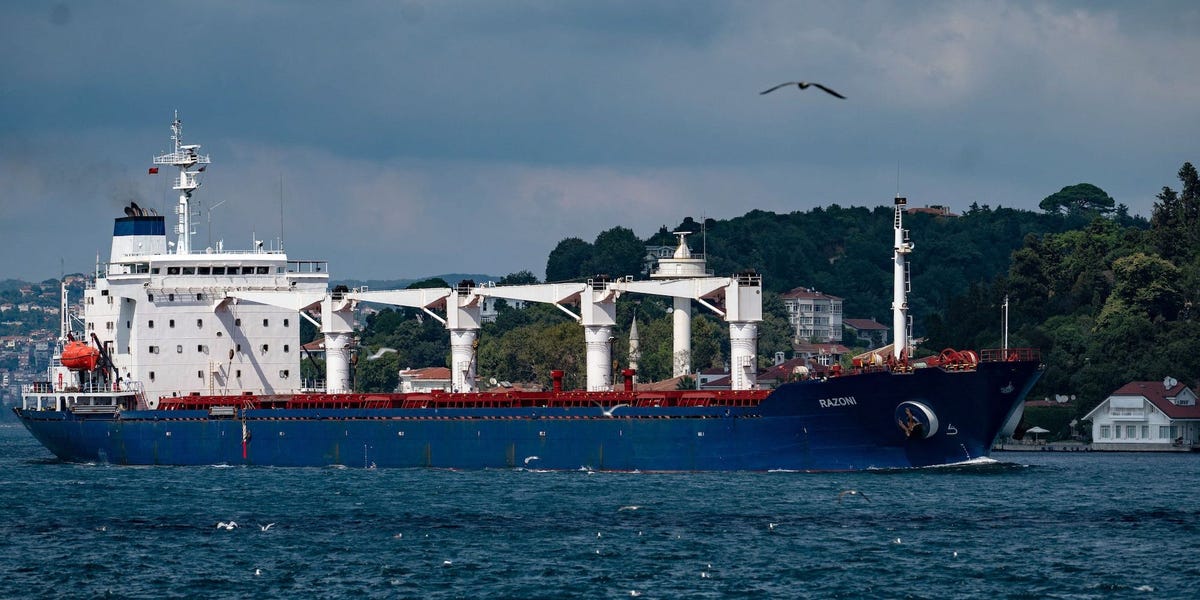 It is taking up to 2 weeks to inspect tankers carrying grain from Ukraine, causing a massive backlog of 150 ships

The time taken to inspect Ukrainian ships carrying vital supplies of grain, fertilizer, and other foods was more than double than normal at points last month, analysts say, leading to a backlog of more than 100 ships waiting to enter or leave Ukraine.

“There are several factors contributing to this queue, including increased interest from the industry to send more vessels to participate in the Initiative, lack of readiness for inspection by some vessels,” the spokesperson said.

The progress of vessels leaving Ukraine has been closely monitored since the beginning of the Ukraine war.

Ukraine is known as Europe’s breadbasket, accounting for around 10% and 15% of the world’s wheat and corn production respectively between 2018 and 2020, according to the International Food Policy Research Institute.

In July, the UN brokered a deal between Ukraine, Russia, and Turkey to restart shipments of grain and other supplies from blockaded Ukrainian Black Sea ports. Under the deal, vessels are provided safe passage through un-mined areas of the Black Sea and are inspected in Turkey, before heading to their final destination.

SovEcon’s data, which was shared on Twitter by the firm’s director, Andrey Sizov, showed that the time taken between vessels leaving the port of Odesa to passing clearance in Turkey has increased sharply.

At the beginning of August the wait was between two and six days, while by mid-September it was between 10 and 15 days on average.

Amir Abdulla, United Nations Coordinator for the Black Sea Grain Initiative, told the FT that more ships were arriving than had been predicted, leaving the committee’s five inspection teams stretched.

“We basically need to get all parties to agree that we need to add inspectors,” Abdulla told the FT.

Inspections are carried out daily by joint inspection teams comprised of Russian, Turkish, Ukrainian, and UN inspectors, the JCC said.

As of Monday, more than 90 ships are yet to reach their final destination, according to the Black Sea Grain Initiative’s tracker, although some of these left port recently. As of October 7, 285 voyages from Ukrainian ports have carried a collective 6,429,098 metric tons of grains and other foodstuffs.

In August, the first ship to leave under the agreement, the Razoni, was temporarily stranded after the intended buyer of its 26,000 tons of grain rejected the shipment.