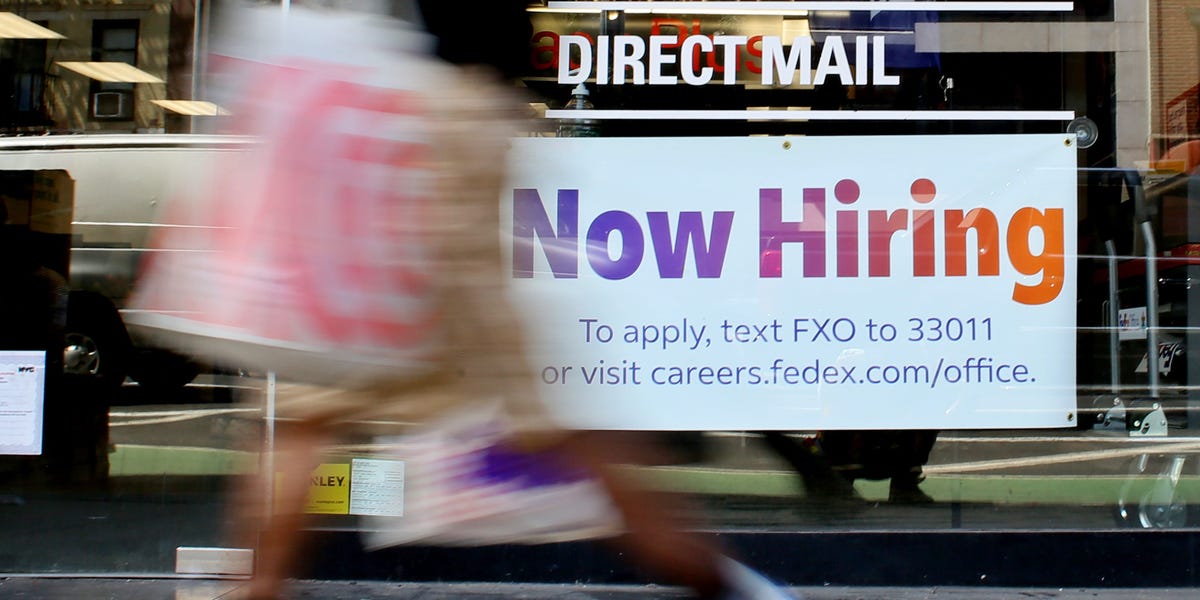 It sure doesn’t feel like a recession is coming. That’s upping the odds of a nasty 2023 downturn.

Despite soaring interest rates, sky-high inflation, and an outlook that’s worsening by the week, the US economy just keeps adding jobs. The labor market took on 263,000 new payrolls in September, surpassing the median forecast of 250,000 jobs and remaining well above the pre-pandemic trend. The unemployment rate dipped back to 3.5% from 3.7%, matching the five-decade lows seen before the pandemic.

Even indicators that would usually flash early warning signs of a coming recession showed little cause for concern. The number of Americans working part-time for economic reasons dropped by 306,000. Average earnings rose by another 0.3%. Average weekly hours held steady for a fourth consecutive month. And as ZipRecruiter’s chief economist Julia Pollak highlighted in a Friday tweet, employment in temporary help services — a sector that usually backslides ahead of a downturn — edged higher.

“There are NO recession warning bells in this jobs report,” she added.

But don’t start celebrating just yet. The Federal Reserve has deemed the labor market as a key battleground in its fight to cool inflation. The historic imbalance between job openings and worker supply helped push wages sharply higher throughout the pandemic, and that, according to Fed Chair Jerome Powell, risks keeping inflation elevated. Until the labor market starts to soften, the central bank is likely to keep hiking interest rates at a faster-than-usual pace.

Cooling inflation would aid households’ finances, yet soaring rates present a new threat. The Fed’s hikes have already curbed consumer demand and led companies to trim their hiring plans. As spending weakens, revenues are poised to slump and further curb economic growth. The central bank has already hinted at several more increases to come through this year and 2023. As rates climb higher, the chances of a 2023 recession rise in kind.

The Fed could abandon its rate hikes, but Friday’s data dispelled hopes of such a pause. The low unemployment rate and steady job gains signal labor demand remains historically strong. At the same time, inflation remains extraordinarily high. That all but confirms the Fed will tee up another three-quarter-point rate increase at its November meeting, Seema Shah, chief global strategist at Principal Global Investors, said Friday.

“Today’s job number is a hawkish reading, with almost all the elements of the report moving in the wrong direction for the Fed,” she said. “Job openings may be coming down, but if that isn’t combined with greater numbers of job seekers, wage pressures will remain still at their elevated level.”

The Fed’s own projections offer a clue as to how much they expect the labor market to deteriorate. Their September median estimate sees the unemployment rate climbing to 4.4% next year and staying there through 2024. If the projection holds true, the uptick from September’s 3.5% rate would mean about 1.5 million more unemployed Americans.

Precedent suggests the true damage will be even worse. An analysis from Bloomberg found that FOMC officials are typically too optimistic when forecasting a rise in the unemployment rate.

Markets picked up on the worse-than-it-seemed jobs report as soon as trading opened Friday. The S&P 500 tanked as much as 2.3% before paring some losses as investors bet on more jumbo-sized rate hikes and an even tougher 2023 backdrop.

While Friday’s jobs report suggests the US economy as a whole remains strong, forecasts of an earnings recession are slightly more likely than those calling for a widespread downturn. The former describes a period in which companies’ profits fall for two consecutive quarters. While it often goes hand-in-hand with a broader recession, it can exist on its own while the rest of the economy holds up, especially if lower revenues don’t translate to significant job loss.

Still, the Friday reading leaves the Fed in the same bind it’s been for much of 2022. Powell emphasized in September that the central bank is willing to endure a period of subpar growth and higher unemployment if it means bringing inflation down for good. As inflation rages on and the job market only shows minor softening, the Fed is more likely than not to stay the course.

“As long as the Fed continues to chart its path in the direction it is right now, that’s the single biggest concern,” Nick Bunker, head of economic research at Indeed Hiring Lab, told Insider.