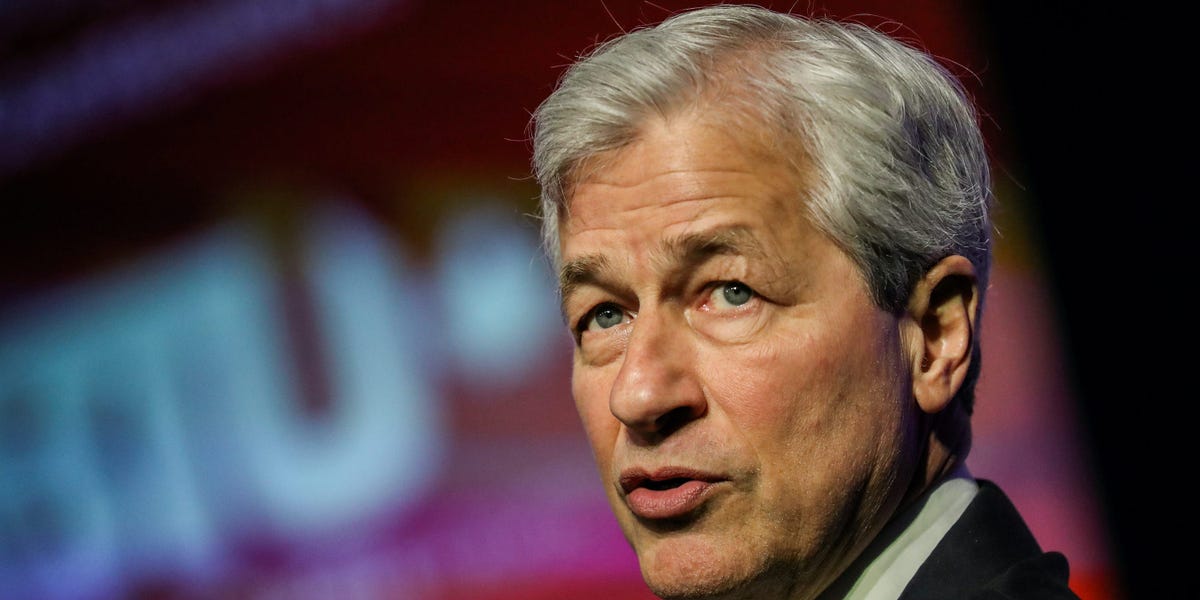 Jamie Dimon warns the S&P 500 may plunge another 20%, predicts a US recession within a year, and welcomes Elon Musk’s Twitter takeover in a new interview. Here are the JPMorgan CEO’s 12 best quotes.

Jamie Dimon has warned beaten-down US stocks could tumble another 20%, predicted a recession within the next year, and bemoaned America’s failure to ramp up oil-and-gas production in recent months.

1. “This is serious stuff. Inflation, rates going up more than people expected and probably a little bit more from here, quantitative tightening which we’ve never had before, and the war. These are very, very serious things which are likely to push the US into some kind of recession, six, nine months from now.”

3. “Tech valuations obviously will come down. When rates go up, the present value of the first 10 years of something is a lot higher than it was before, so anything with a payout that’s way out there automatically has less value.” (Dimon was outlining why higher interest rates weigh on tech stocks in particular.)

4. “Not quite like that, I think that was a little bit of a frenzy. It will again, but it may take another 15 or 20 years. You will have bubbles again.” (Dimon was asked whether stocks would return to the peak valuations they secured during the pandemic.)

5. “The one guarantee is you’re going to have volatile markets. You’ve already seen markets down quite a bit, but it’s still been orderly. It’s possible you’re going to see it be disorderly sometime in the not-too-far future.”

6. “You see early signs of distress. There’s a lack of liquidity in a lot of markets. The likely place you’re going to see more of a crack, and maybe a little bit more of a panic, is in credit markets. If I was out there, I’d be very cautious. If you need money, go raise it.”

8. “There was a huge amount of fiscal stimulus and quantitative easing going into this, amounts that were never seen before on this planet, other than during World War II. But we’ll be on the pathway back, one way or another.” (Dimon was asked whether inflation would eventually slow to the Fed’s target rate of 2% a year.)

9. “We’re getting energy completely wrong. America should have been pumping more oil and gas. We have a longer-term problem now as the world is not producing enough oil and gas to reduce coal usage, make the transition to clean energy, and create security for people. I would put that in the critical category. This should be treated almost as a matter of war at this point, nothing short of that.”

10. “It’s a day that’s going to live in infamy. It’s Pearl Harbor, it’s Czechoslovakia, and it’s really an attack on the Western world. It’s a devastating war, it’s roiling all markets, and it’s changing everyone’s mind about national security around everything, whether its food, energy, or technology.” (Dimon was commenting on the wider effects of Russian President Vladimir Putin’s ongoing invasion of Ukraine.)

11. “Nuclear proliferation is still the greatest threat to mankind. If we’re not sitting here in 200 years, it’ll be because of nuclear proliferation. Putin has taught the world that having a nuclear weapon gives you pretty much authority to bully any neighbor you want.”

12. “I hope Elon cleans up Twitter. He’s very smart, I love reading some of the stuff he does, and I hope he does a good job. (Dimon complained about the number of fake and automated accounts on the platform, and called for Twitter users to have more choice in how their timelines are organized.)