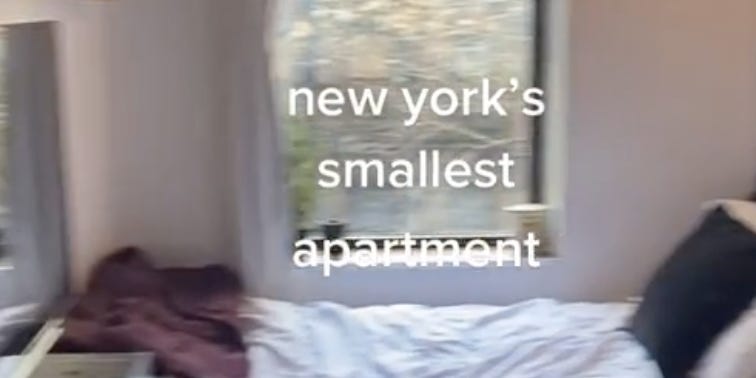 Man pays $1,100 a month for 95-square-foot NYC apartment with NO toilet

In an effort to afford living in one of the most costly US cities, New Yorkers are opting for tiny apartments – where they share bathrooms with their neighbors.

Alex Verhaeg, 23, pays $1,100 monthly for a 95-square-foot apartment in Manhattan’s East Village. But, according to CNBC, it’s dorm-style housing: He and his neighbors share three bathrooms on their floor.

“Living here can sort of feel like you’re in the college dorms because of the shared amenities,” he told CNBC. “Sometimes you’ll see your neighbors in a towel or a bathrobe. You sort of just get used to it.”

Verhaeg’s living arrangement isn’t uncommon for those who need affordable housing in Manhattan. He and his fellow New Yorkers have taken to TikTok to share their uniquely small setups.

Alaina Randazzo says she lives in “the most affordable apartment in New York City” for only $650 a month. The catch? She must leave her micro studio and walk past neighbors to use the bathroom – which, while separate, is private.

Randazzo’s tiny apartment – 80 square feet – includes a tiny kitchen with a two-burner cooktop, mini fridge, microwave, and a sink. A tour of her apartment garnered over two million views on TikTok.

Most viewers were both shocked and impressed by how she maximized the small space.

“That’s not an apartment… that’s a cupboard,” one commenter wrote.

But some New Yorkers in the comments remarked on the relatively cheap rent – even for such a small space; one wondered “how they got this for only $650.” After all, Randazzo does have her own private bathroom and a skylight.

TikToker Axel Webber went viral in 2021 for his $1,200, 95-square-foot apartment. A short tour of his space, which featured a loft bed and refrigerator, but no stove or private bathroom, garnered over seven million likes and tens of thousands of comments.

According to a report from Insider, Webber was living in his car when he found the East Village apartment on Facebook Marketplace. Like Verhaeg, Webber shares a bathroom with neighbors living on the same floor.

“I saw the listing, saw the pictures, and it looked small online, but it was even smaller in person. But I kind of fell in love with it,” he continued. “I was like, ‘This place is perfect for just me, for one person, and it’s available, so I want it right now.'”

Verhaeg told CNBC he didn’t mind paying the extra $100 when his rent increased from $1,000 to $1,100 this year because he doesn’t pay utilities. He shared a breakdown with his 54,000 TikTok followers when asked about “the bathroom situation.”

In the video, Verhaeg demonstrates exiting his apartment and walking down the hall to three separate rooms each with a toilet and sink, and two rooms with just a shower. Commenters pointed out the odd layout of his building.

“You can see how they turned a normal apartment into 3 overpriced chicken coops,” one comment read.

Verhaeg found his tiny apartment on Zillow in 2020, but he didn’t see it in person until it was time to move in.

“It was a little bit of a shock when I saw how small it was, but I really wanted to try living in this area,” he told CNBC. “Any space can be made into a home, no matter how big or how small that space is. You just gotta put some love into it.”