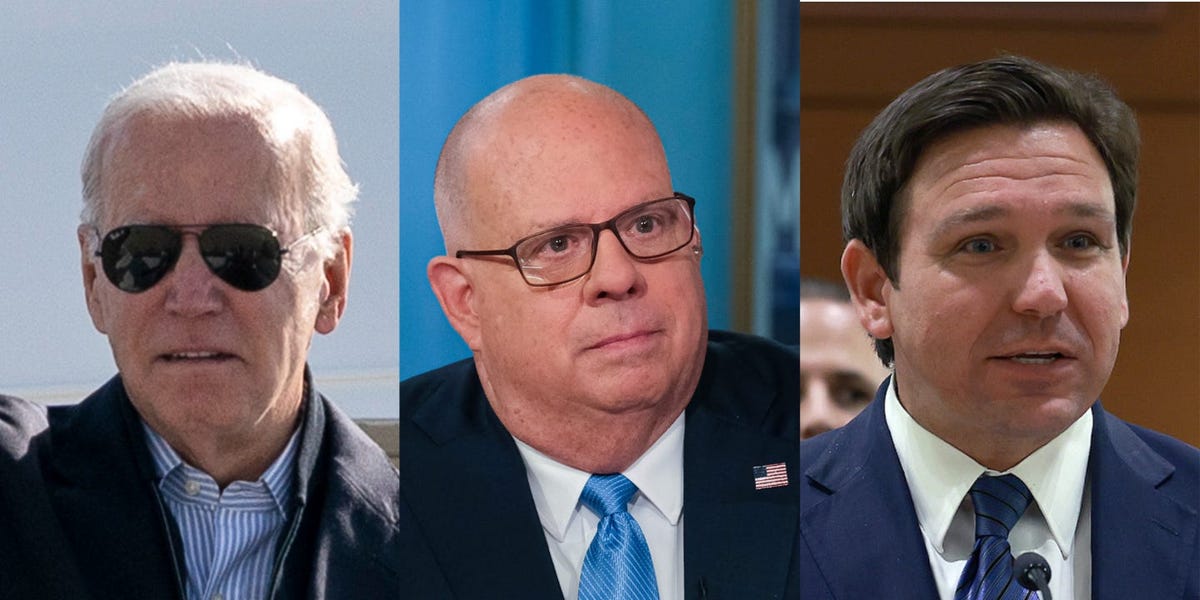 During his New Hampshire appearance, Hogan said he was opposed to former President Donald Trump becoming the nominee in 2024, and wouldn’t endorse him. Hogan is a centrist Republican in a deep-blue state who has been open about snubbing the former president.

“I think there are probably 10 people that want to be the next Donald Trump, and I think there may be a different lane,” Hogan said at the Politics & Eggs series at Saint Anselm College, hosted by The New England Council and the New Hampshire Institute of Politics.

But Hogan reserved his sharpest criticism for Biden and DeSantis, and said politics had become about “show ponies” while “America needs more workhorses.”

He took issue with DeSantis relocating Venezuelan migrants from San Antonio, Texas, to Martha’s Vineyard, Massachusetts, in September, saying he thought it was a “mistake.” Three lawsuits have been filed over the matter, and Hogan panned DeSantis’ actions as “performative politics.”

“He went to Texas and basically grabbed 50 people and sent them to Martha’s Vineyard as a publicity stunt,” Hogan said. “I think it was a terrible idea. Let’s just try to address the issue seriously and fix the problem rather than trying to get on TV.”

Pressed by an audience member about what should be done on illegal immigration, Hogan said he “understood the frustration of the federal government doing nothing” after having conversations with GOP Gov. Greg Abbott of Texas.

Abbott has been providing buses for migrants to to go cities such as New York and DC, and Hogan said people who go to DC do come up to Maryland, making it “a problem I had to deal with rather than them.”

“I didn’t like the most recent stunt with somebody that was taking someone from a different state and dropping them in New England,” he said, referring to DeSantis. “That really was to just get attention I think.”

Still, Hogan noted that he was among 25 governors who sent a letter to the Biden administration last year calling for a meeting on immigration policies.

Hogan has been making several trips to New England of late. New Hampshire is the nation’s first primary state for Republicans, making it a go-to for presidential aspirants.

Should Hogan choose to run for president in 2024, it’s possible he’ll face off against DeSantis and several other Republicans for the ticket. The Florida governor is up for reelection in November and hasn’t said he’s seeking the White House, but polling shows he’s been edging onto Trump as a GOP favorite.

Biden, however, has said explicitly that he plans to run for reelection. During his remarks last week, Hogan criticized Biden over record inflation, gas prices, crime, and legislation he has signed as president that included a coronavirus rescue package as well as a health and climate spending bill.

Hogan derided the measures as a “reckless grab bag of progressive wish-list items” and criticized Biden for a primetime speech he gave blasting MAGA Republicans.

“Joe Biden said he would govern from the center, but instead he caters to the far-left extremes of his party,” Hogan said. “And he flails from crisis to crisis, showing weakness to the world. Biden promised to work toward uniting the country but instead he attacks millions who voted against him as a threat to Democracy.”

Neither the White House nor the Florida governor’s office responded to a request for comment before this story’s publication.

Hogan is among the most popular governors in the US, with a 70% approval rating in his state, according to polling from Morning Consult Political Intelligence.

While Hogan said at the even that “I have never said I was going to be a candidate for president,” he left the door open to the possibility, saying he wanted to get Republicans “back to winning elections” and “I don’t know what path I’ll take.”

“I promise that after I’m done being governor I will take a look at that, but I’m not here to convince you that I’m on that path quite yet,” he said of a White House run. “If it’s not me and I don’t see a path I want to help who I think is the strongest possible candidate.”