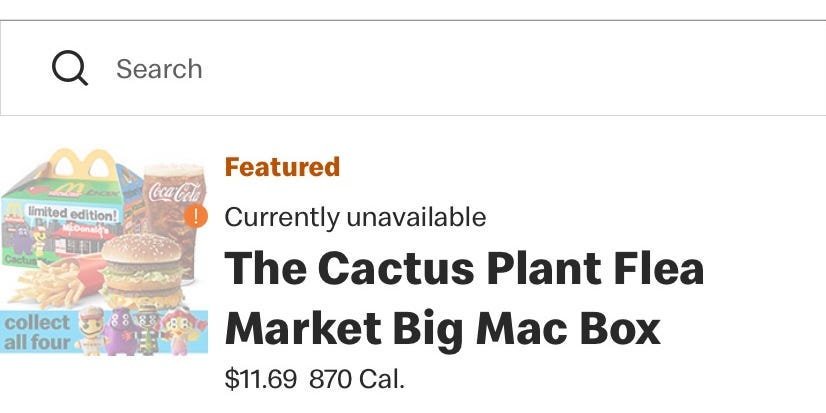 
McDonald’s just released its “Happy Meal for adults” on Monday, and it’s already proving to be a huge success.

Three workers told Insider that the chain’s Cactus Plant Flea Market meal promotion that started October 3 has already been so popular that the stores they work at ran out of the figurine “toys” or boxes required to offer it.

“We had a line outside our store the first day,” a McDonald’s worker in San Antonio told Insider, and “we were sold out [of boxes] by 6 p.m.” The worker said that on Wednesday, the third day of the promotion, he was told by his manager that they were sold out at some locations across Texas and the rest of the US.

The meal is a collaboration between McDonald’s and streetwear brand Cactus Plant Flea Market. Customers who order the meal will get either a Big Mac or 10-piece McNuggets, medium fries, a medium drink, and a random figurine “toy” all packed inside a special box. The figurine is either Grimace, the Hamburglar, Birdie, or the new Cactus Buddy, all in an updated style with four eyes inspired by the Cactus brand.

Another worker in Southern California said that her location ran out of the meal in the evening of the first day of the offer, leading to some customers leaving without ordering anything. In New York, a crew member said that his store had to switch to regular Happy Meal boxes to serve the meal during dinner, and ran out of toys before closing time.

The workers asked to remain anonymous due to not being authorized to speak to the press, but their employment was confirmed by Insider.

A McDonald’s spokesperson did not provide a response to Insider’s request for comment on the promotion’s success.

Insider called 12 McDonald’s locations across the country, and seven of them confirmed that they did have the toys available. Customers online have also reported them being sold out at their local restaurants. Some locations also show the meal as “currently unavailable” to order in the McDonald’s app.

This collaboration with Cactus is also a continuation of McDonald’s successful strategy of partnering with brands that speak to both customers and employees, Kalinowski said. It’s “in keeping with McDonald’s promotions with celebrities,” including Travis Scott, BTS, and Saweetie.

Like the Cactus collaboration, the Travis Scott meal was so popular that some locations ran out of Quarter Pounder ingredients. The spring BTS meal was also popular, driving traffic to restaurants and giving McDonald’s its busiest week of the year to date.

Do you have a story to share about a retail or restaurant chain? Email this reporter at mmeisenzahl@businessinsider.com.