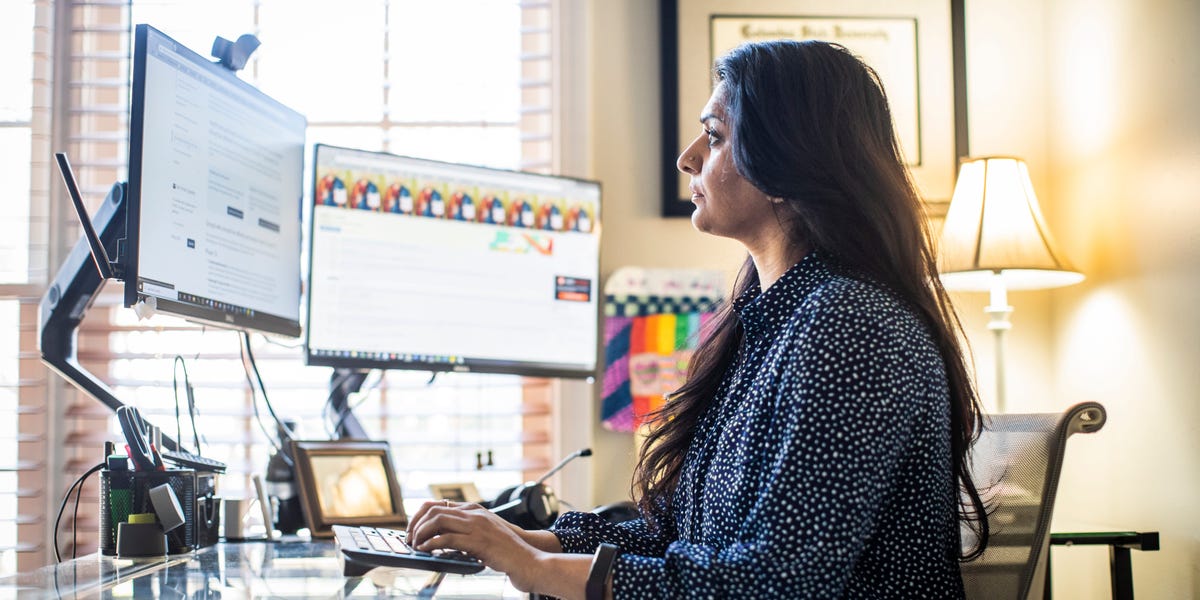 Meet a Gen Z remote worker who told her boss she was quiet quitting for the sake of her health: ‘I need to do my role as defined, but also not apologize for who I am’

When Gina Cobb was diagnosed with a chronic autoimmune illness last year, it completely changed her life — and transformed her relationship with work.

Cobb, 26, is a senior marketing strategist who works remotely at an international marketing firm based in Toronto, where she’s been working for the past two years. She asked that her real name, exact autoimmune disorder, and company be kept private, but all have been verified by Insider.

Cobb told Insider her autoimmune illness and a concurrent ADHD diagnosis made her a completely different type of employee. Whereas before she had regularly worked extra hours without complaint and took on large workloads, she said, the realities of her condition meant that it was time to make a change.

That’s why she decided to join the league of workers who are “quiet quitting.”

Sometimes called “acting your wage,” the practice involves doing your job as written for the pay you receive, and no more. It might not seem new or controversial, but it illuminates how workers are seeking better work-life balances and reshaping their visions of a 9-to-5 — especially during the Great Resignation, and especially for young people, who are seeking to treat their personal lives as careers and their work as side hustles.

For workers like Cobb, quiet quitting is more than just a philosophy: it’s a matter of survival.

“Work was definitely a thorn in my side that really affected my entire life,” she told Insider. “Because when I was neglecting my health that bled into my personal life… It became unclear to me where my illness stopped and the stress of my job began.”

Cobb first got sick when she started at her job, and said that her mental health issues were exacerbated by the stress of trying to navigate both.

When first starting out in marketing, Cobb said she was “that person who’s working those longer hours trying to impress your bosses, that type of thing.”

But now that she’s often in physical pain, she said she had to make a change.

“When you’re in the midst of a flare, it’s to the point where sometimes you can’t get out of bed because you’re in so much pain,” she said.

“From your brain, to your stomach to your skin, it’s something that is a holistic attack on your entire immune system and body,” she said, adding that she experiences brain fog as well. She also is highly sensitive to sunlight during bad flare-ups, which makes it difficult to work in person when she needs to.

Cobb said that at first, she attributed the symptoms of her illness to work stress, given that she was working long, remote hours, sometimes 12 hours a day. There was also a mass layoff at her company last year, which Insider verified, meaning that remaining employees like Cobb were expected to take on the leftover workload.

“It was the cycle of getting up, working evenings, working weekends, and that combined stress with the fatigue that I was feeling. And that got to the point where I was just getting so sick,” she said. “It was so hard to separate what was caused by the anxiety of that job and what was caused by my illness.”

After receiving her diagnosis, Cobb took a month-long sick leave that helped her re-orient her approach to work. She said that time off helped her get a handle on her symptoms, and lessened the amount of pain and brain fog she was experiencing.

When she got back to work, Cobb set boundaries: her employers declined her request for a pay raise and a promotion, she said, so she began to only do the tasks that were clearly outlined for her role.

“I said that out loud,” she said. “I said, ‘I just want to be mindful that I’m not going to be working beyond this role at this pay level,’ and when they started asking for more later, I would say in my head, ‘no, I’m not doing more.’ And I found ways to make sure I’m logging off at 5 pm, making sure I’m doing those quiet quitting things. I had a conversation with my team and was even like, ‘look, I’m willing to do more if you are going to compensate me.'”

With more money comes more accommodations, she said — she could pay for a house cleaner, or to get tints on her car windows to help with her sensitivity to sunlight, which means she could drive to the office more frequently.

“It would be worth it because there’s little things that pay increases can afford you that enable you to maybe put more of yourself into your work life,” she said.

Cobb emphasized that she’s not really doing less work, but rather, “I’m speaking up when things aren’t getting done or when there’s an issue,” such as a co-worker handing over an assignment late.

“And now when I send emails, I say, ‘hey team, if it comes through before so-and-so time, I will submit. If not, we’ll do it tomorrow.”

That’s a big difference from earlier in her career, she said, which she attributes to being young and not wanting to push back. Similarly, Cobb said that being a woman of color in a majority-white workplace made her feel like she was too scrutinized to get away with saying “no” to things.

“I don’t want to say young people set ourselves up to be taken advantage of, but we don’t know how far we can push back,” she said. “That’s something I had to learn. I need to do my role as defined, but also not apologize for who I am.”