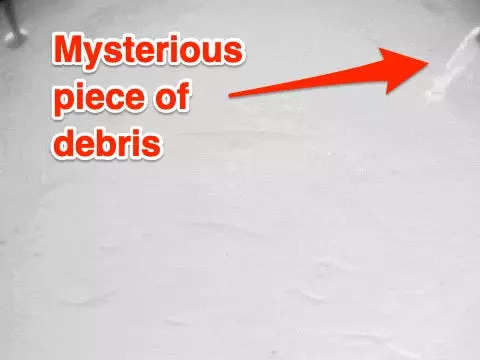 
NASA’s Ingenuity helicopter, the first aircraft to take flight on another world, had an unexpected passenger along for part of its most recent flight on Mars: a piece of debris.

On September 24, the drone completed its 33rd flight. During the flight, the helicopter’s navigation camera, or Navcam, captured images of the chopper taking off with a piece of debris that looked like a plastic candy wrapper dangling from one of its legs.

The object eventually fell off helicopter’s leg and floated back toward Mars’ surface, as shown in the video below. It remains unclear what it was.

During the flight, the small helicopter reached an altitude of about 33 feet and traveled 365 feet west in 55.2 seconds, according to NASA.

In a blog post, NASA said the debris was not visible in footage from Ingenuity’s previous flight.

“All telemetry from the flight and a post-flight search and transfer are nominal and show no indication of vehicle damage,” NASA officials said, adding, “The Ingenuity and Perseverance Mars 2020 teams are working to discern the source of the debris.”

NASA did not immediately respond to Insider’s request for more information.

Tasked with searching for signs of ancient life, Perseverance — with Ingenuity tucked its belly — landed on Mars on February 18, 2021, after a 300-million-mile journey that took seven months. Our robot emissary will collect samples that will eventually be returned to Earth, potentially as early as 2033.

Scientists’ main concern about debris on Mars is the risk it poses to current and future missions. The Perseverance and Ingenuity teams document all debris they find to make sure it doesn’t contaminate samples the rover is collecting, according to a NASA blog post.

Ingenuity and Perseverance have spotted pieces of interplanetary trash before. In July, Perseverance spotted a tangle of noodle-like material, which turned out to be netting from thermal blankets the robot uses to regulate its equipment temperature. In April, Ingenuity captured a bird’s-eye view of the landing gear that helped the rover complete its dramatic entry, descent, and landing on Mars.