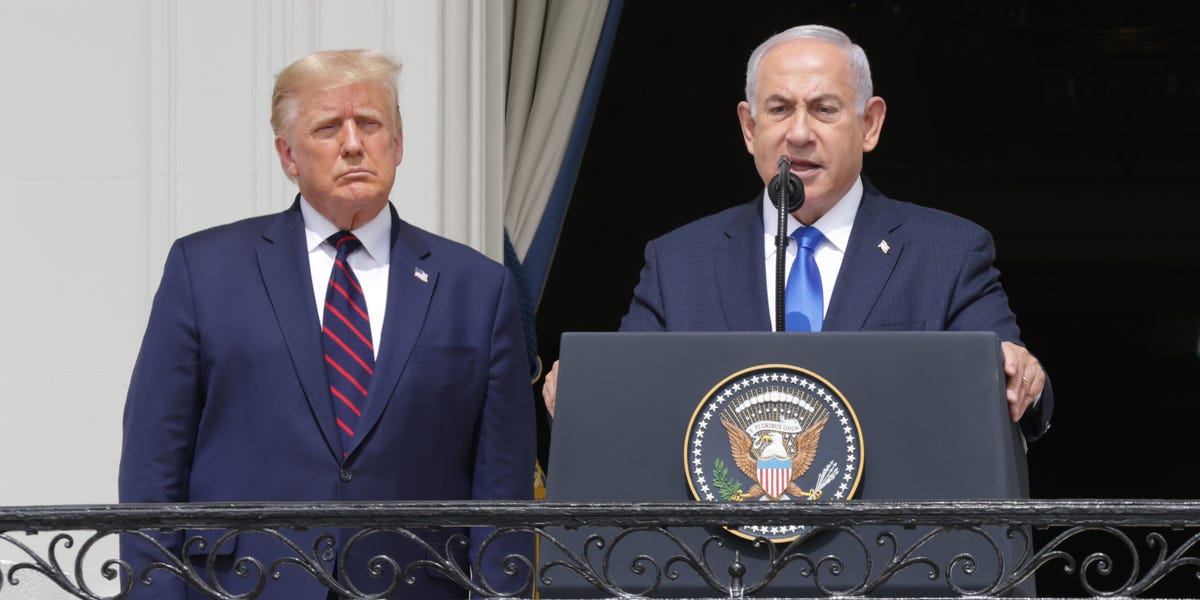 Netanyahu appealed to Trump’s love of golf and used NYC maps to turn the president against Palestinians, new memoir says

The revelations come from Netanyahu’s “Bibi: My Story,” in a pre-release copy which The Guardian obtained.

According to The Guardian’s reporting on the memoir, Netanyahu said he used a variety of creative strategies in meetings with Trump that he hoped would resonate with the then-president and get him on board with Israel’s interests.

One such strategy was using visual aids. According to The Guardian, Netanyahu wrote in his memoir that he once presented a “simple slide” containing a map comparing certain distances in Israel to distances in New York City.

“It showed the distance from Tel Aviv to the 1967 lines to which the Palestinians demanded we retreat,” Netanyahu wrote, per The Guardian. “Superimposed on the map was the distance from Trump Tower to the George Washington Bridge.”

Netanyahu wrote that the two distances “were identical.” The distance between Trump Tower and George Washington Bridge is a little over six miles. According to CNN, Tel Aviv is roughly 11 miles from the 1967 demarcation line.

“‘Mr. President,’ I said, ‘would you let a regime that wants to annihilate you set up a state at the George Washington Bridge? Of course not. Neither would we,'” Netanyahu wrote in his memoir, per The Guardian.

According to the media outlet, Netanyahu also wrote in his memoir that he and Ron Dermer, the Israeli ambassador to the US, used golfing metaphors to get through to Trump.

Netanyahu wrote in his memoir that Trump “got it,” The Guardian reported. “For the time being, at least, we had certainly moved him to a better place.”

Netanyahu also wrote that he and David Friedman, then the US ambassador to Israel, played a video to Trump designed to “adjust his thinking” about Palestinian President Mahmoud Abbas.

The video sought to portray Abbas as untrustworthy, The Guardian said, showing the Palestinian leader talking about peace in English and praising terrorists in Arabic.

“I could see that the video registered with Trump, at least momentarily,” Netanyahu wrote, per The Guardian. The former Israeli prime minister added that he had hoped the video would “mitigate further bonding” between Trump and Abbas.

In January 2020, toward the end of Trump’s time in the White House, his administration proposed a plan to resolve the Israel-Palestinian conflict.

At a joint press conference with Trump, Netanyahu praised it as “the deal of the century.” Abbas, however, rejected the plan and described it as the “slap of the century.”