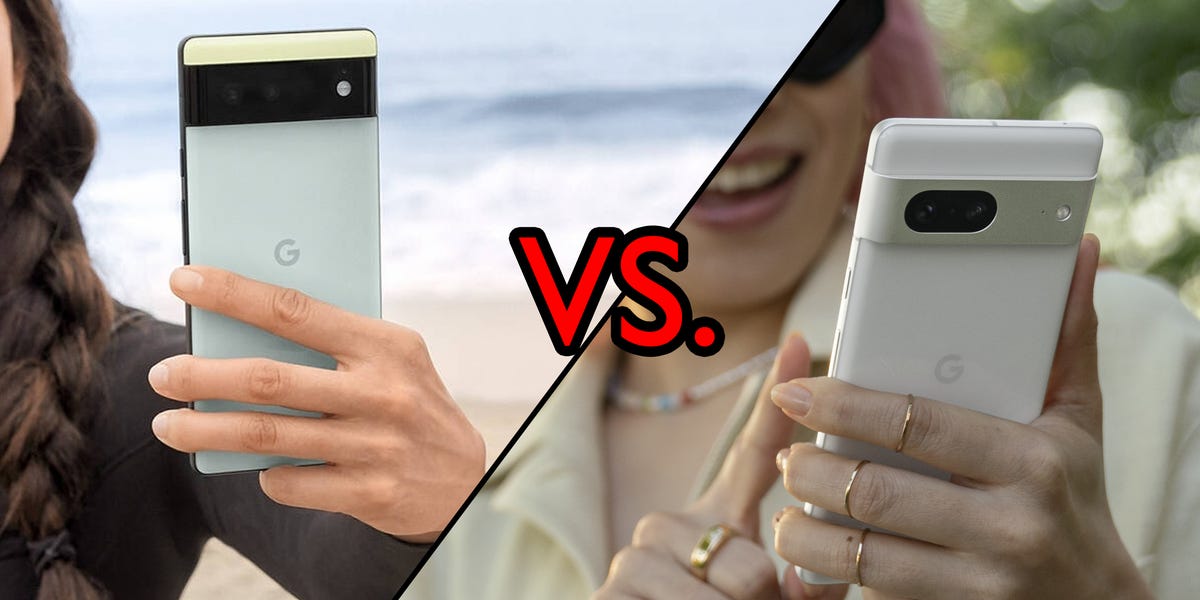 Google has a new flagship phone in the Pixel 7. As the newest entry in their line of budget Android phones, the Pixel 7 is a direct successor to last year’s immensely popular Pixel 6. So how does the new phone stack up?

If you own a Pixel 6 and are thinking of upgrading, or have an even older model and aren’t sure which one to buy, here’s a full guide comparing both models on price, size, features, and more.

The Pixel 6 and Pixel 7 are very similar in appearance.

The Pixel 6’s screen is 6.4 inches, slightly larger than the Pixel 7’s 6.3-inch screen. Both have the same screen resolution, 1080 x 2400 pixels, but the Pixel 7’s smaller screen gives it a higher pixels-per-inch (PPI) rating.

Both phones are IP68 dust- and water-resistant, meaning they’re incredibly dustproof and can work at up to 6 meters underwater for up to 30 minutes. They’re also both made out of aluminum, with a “scratch-resistant” glass screen. The back of the Pixel 6 has a long black bar across it, but the Pixel 7 has a lighter colored bar.

You can buy either Pixel model in one of three colors. The Pixel 6 comes in Seafoam green, Coral pink, and Stormy black. The Pixel 7 comes in Lemongrass green, Snow white, and Obsidian black.

Both the Pixel 6 and Pixel 7 have three cameras: One “selfie” camera in the front, and two on the back.

Both phones have almost the exact same rear cameras: One 50MP wide camera, and one 12MP ultrawide camera. The only difference is that the Pixel 6’s camera only had 7x digital zoom, while the Pixel 7 offers 8x digital zoom.

The real differences between the Pixel 6 and Pixel 7 cameras aren’t in the lenses, but in the software. Both Pixel phones give users a ton of ways to digitally enhance their photos, from a portrait mode that makes close-up shots crystal clear, to a “Magic Eraser” that uses AI to delete unwanted objects from your pictures.

The Pixel 7 has every special camera feature that the Pixel 6 had and more. Two new camera features include Cinematic Blur, which keeps the subject of your shot clear while blurring the background; and Photo Unblur, which uses AI to add detail to out-of-focus shots.

Both phones can shoot in 1080p or 4K, and include video stabilization tools to help action shots look better.

In 2021, Google revealed that the Pixel 6 would run on an internal chip called the Google Tensor. This small chip manages every part of the Pixel 6, from launching apps to displaying images. For a phone as inexpensive as the Pixel 6, it was an incredibly powerful chip.

The Pixel 7 marks the debut of the Tensor G2, an upgraded version of the original Google Tensor. It does everything that the original Tensor did, but runs faster and uses less power. It also features more advanced neural processing networks, which gives the Pixel 7 better speech recognition and makes the AI camera features more accurate.

When it comes to day-to-day tasks, the Pixel 7 will move faster than the Pixel 6. It’ll also let you play graphically intensive games with less lag.

Battery-wise, the Pixel 7’s 4,355 mAh battery has less capacity than the Pixel 6, which is rated at 4,614 mAh. But Google promises “beyond 24 hours” of battery life for both the Pixel 6 and Pixel 7, assuming regular use.

The biggest difference between the two is that while the “Extreme Battery Saver” mode is turned on, the Pixel 7 will last up to 72 hours, but the Pixel 6 will only last up to 48.

Pixel 6 vs. Pixel 7: Other notable features

Starting later this year, all Pixel 7 owners will have access to a free built-in VPN service called Google One VPN. This is one of the most exciting new features coming to the Pixel 7, and will go a long way towards protecting users online.

In our view, that’s the only Pixel 7-exclusive feature worth noting. Aside from the VPN, the Pixel 6 and Pixel 7 are nearly identical in terms of features.

Following the announcement of the Pixel 7 last week, the Pixel 6 and the Pixel 7 were briefly available from Google at the same price point. Since then, the Pixel 6 has gone out of stock on Google’s site and is now available at a $200 discount from third-party retailers like Best Buy and Amazon.

Which phone should you get?

The Pixel 6 and Pixel 7 are Google’s budget smartphones, and they aren’t too different. The Tensor G2 chip will help the Pixel 7 run faster in every situation, but the Google Tensor chip is plenty fast too.

So if you’re in the market for a new smartphone, which one should you buy? To start, the current $200 discount for the Pixel 6 makes it a great budget purchase, as it is in many ways comparable to the Pixel 7.

In the end, though, your choice depends on what kind of phone you have right now: If you own a Pixel 6, there’s not much reason to upgrade to the 7, for instance. But if your phone is showing its age and you’d like to get a brand new smartphone that is still relatively inexpensive, the Pixel 7 could be worth the additional cost to unlock better performance and longevity.