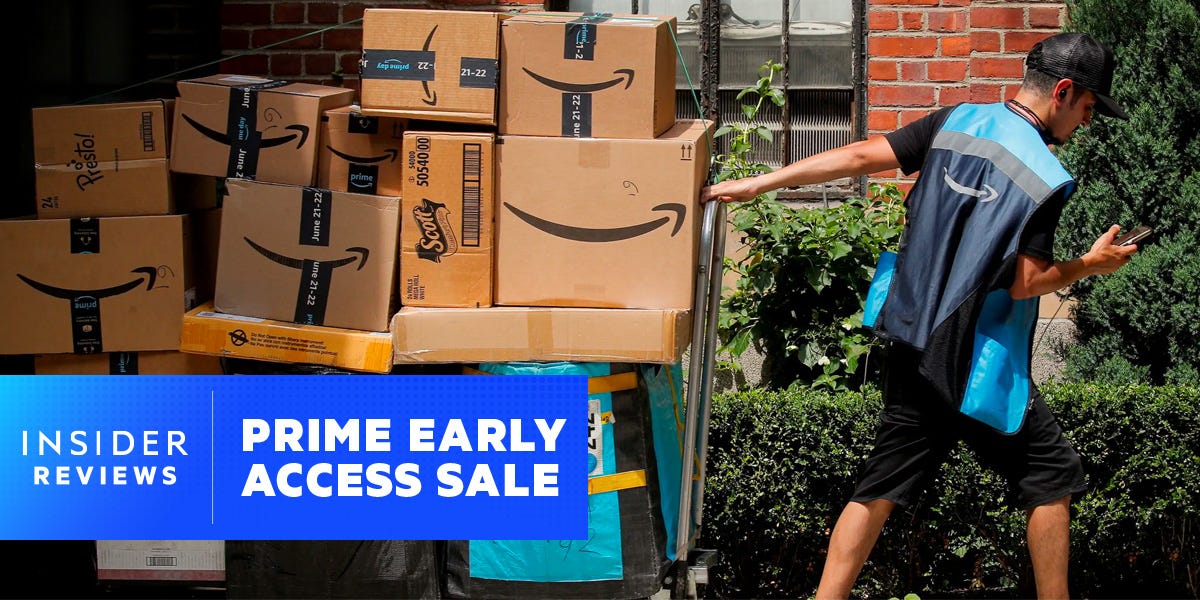 Prime Early Access Sale 2022: A preview of what to expect from Amazon’s second Prime Day in October

Earlier this year, Insider reported that Amazon could potentially be hosting a Prime fall deal event. And now it’s official: Amazon has finally announced its Prime Early Access Sale. The retailer will be holding the two-day sale event on October 11 and 12, and it will be similar to its annual Prime Day shopping extravaganza.

Of course, we’ll be helping you find all the best deals as the big sale approaches. Here’s what we know about the Prime Early Access Sale so far, and what types of deals will be offered.

As Prime Early Access approaches, Amazon is already offering discounts on many of its own devices:

While the Prime Early Access Sale is technically not another Prime Day, there will be a lot of similarities. Just like the annual Prime Day shopping event, you’ll need to be a Prime subscriber to get access to all the deals during the two-day event.

What deals can we expect from the Prime Early Access Sale?

First, you’ll want to bookmark the Prime Early Access page, where the deals will be dropping.

During the Prime Early Access Sale, Amazon has announced there will be savings of up to 80% on select Amazon Fire TVs and 55% on Echo devices and Fire tablet bundles Fire TVs. There will certainly be more incredible savings on all the top Amazon devices, from Kindle e-readers to Ring video doorbells.

But Amazon’s own suite of products will not be the only items on sale during this year’s second Prime Day. Amazon’s Prime Early Access Sale will also showcase deals across electronics, clothing, toys, household goods, books, kitchen appliances, beauty items, and more.

For example, you’ll be able to save up to 50% on select Hasbro toys, electric toothbrushes from Oral-B and Phillips, and headphones and speakers from JBL, Sony, and more.

You’ll also see savings of up to 45% on select Shark and iRobot vacuums, 40% off Keurig, Ninja, and Vitamix products, and 30% off Casper pillows and mattress toppers.

We expect the same quality of deals as the first Prime Day, plus a few more surprises aimed at holiday shoppers. Because this sale is designed to kick off the holiday shopping season, plan for a lot of deals on toys, apparel, and other giftable items — for example, you’ll see 40% savings on certain Barbie items and 30% off select LEGO sets.

Are there any early deals?

The best early Amazon deals include many of its own gadgets, from the Echo Dot to Fire TV Sticks and Ring Doorbells, as we highlighted above.

There are a few other Prime Early Access Sale deals worth noting:

How long do deals last?

While Prime Early Access Sale lasts for 48 hours, it’s important to understand that many deals do sell out quickly. For example, Lightning Deals are limited-time, limited-inventory discounts. They are Amazon’s version of a flash sale — complete with a countdown clock — and last for just a few hours or until the item sells out.

Are Prime Early Access Sale deals the same both days?

Over the 48-hour event, Amazon releases thousands of sales. There are some deals that span both days, but some deals sell out quickly. If you shopped the first day of Prime Day, you can expect a whole new set of fresh deals on the second day.

How to prepare for the Prime Early Access Sale

Sign up for Prime: As a reminder, only Prime members can participate in Prime Early Access Sale. That said, you can sign up and take advantage of the free 30-day trial and cancel it after the event. If you plan to cancel your account after Prime Day, be sure to set a reminder.

Start shopping now: With big sales events like Prime Early Access Sale, it’s easy to fill your cart with things you don’t need. That’s why we recommend setting a budget and a shortlist of specific items you want to buy in advance. Take the time to outline what items you want to buy, research them in advance, and then save them to your Amazon Wish List so you’re ready to go if those items go on sale.

Amazon is also making it easier to support small businesses and shop Climate Friendly Pledge products to promote sustainability and discover deals from Black-owned and woman-owned brands and artisans.

Consider maximizing your rewards: The Amazon Prime Rewards Visa Signature credit card is a no-brainer for anyone who does a lot of shopping on Amazon. In addition to receiving a $200 Amazon gift card for signing up before Prime Day, you’ll get 5% back year-round on everything you buy from the site and from Whole Foods market, with an additional 10% to 20% back on select products.

Quick tip: Ahead of the Prime Early Access Sale, remember to update any relevant account information, including payment options and shipping addresses. Deals can go quickly, and it’s best to make sure you’re ready to go.

Check the price history: The best Prime Day advice is to always compare historical prices with Prime Day prices. To understand if you’re actually getting a good deal, use the free tool CamelCamelCamel. It is the most trusted Amazon price tracker available, and you can get notifications for price decreases for any product listed on Amazon.

Monitor lightning deals: Lightning Deals — flash sales that only last a few hours — are a big part of Prime Day, and you’ll need to be ready to buy right away due to limited quantities. However, if the item you want does sell out, you can join the waitlist. If someone doesn’t complete the purchase within 15 minutes, the deal is made available to the next person on the waitlist.

Set up deal notifications: This is where coming with a plan for specific items you want to buy pays off. If you download the Amazon mobile app, you can set up deal alerts for the items you care about. First, you’ll want to add the items to your Amazon Wish List. Then, all you have to do is open up the Amazon app and navigate to your Settings. From the drop-down menu, click Notifications. From there, turn on Your Watched & Waitlisted Deals.

Double-check the specs: If you’re hunting for gadgets and tech devices specifically, take a close look at the specs, especially if you’re looking at refurbished older models. If you wouldn’t buy the product at full price, you may want to rethink your purchase. General rule of thumb: It’s a good idea to buy tech with specs with the future in mind, not just right now.

Follow Insider Reviews: We’ve been covering Prime Day since its inception, and if you don’t have time to prep, we’ve got you covered. We’ll be surfacing up the best deals across the entire sale with real-time coverage.

Antonio is a senior tech reporter for Insider’s Reviews team, where he helps lead coverage, reviews, and guides of smartphones, tablets, accessories, wearables, smart home products, as well as audio devices from Apple, Google, Samsung, OnePlus, and other major tech companies. Before joining Business Insider, Antonio was a consumer-electronics analyst at PCMag. He graduated from Colgate University in 2009 with a bachelor’s degree in history.
You can contact Antonio with tips and cool tech via email at: avillasboas@businessinsider.com
Learn more about how our team of experts tests and reviews products at Insider here.
Learn more about how we test tech and electronics.