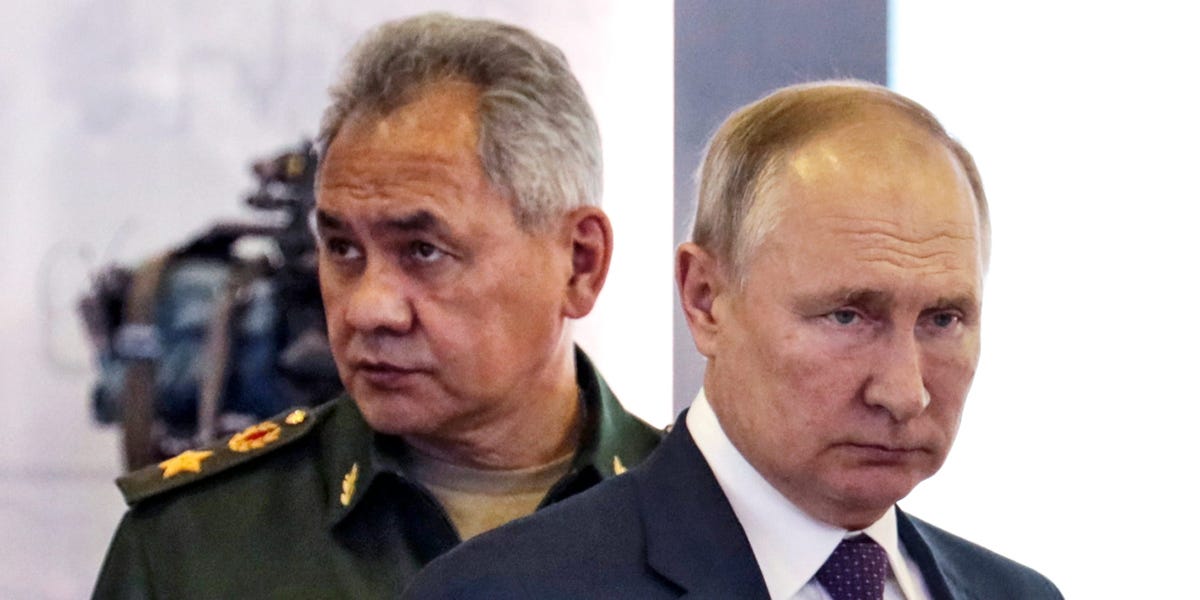 
A top ally of President Vladimir Putin made an extraordinary public attack on Russia’s defense minister, suggesting the minister should kill himself over Russia’s recent military losses.

Kirill Stremousov, a pro-Russia Ukrainian politician who was installed as Putin’s puppet leader in the occupied Ukrainian region of Kherson, took aim at “generals and ministers” in a video message on Thursday, Reuters reported.

He singled out Russian Defense Minister Sergei Shoigu, who he blamed for Ukraine’s recent advances in the northeast of the region.

“Indeed, many say: if they were a defense minister who had authorized such a state of affairs, they could have, as officers, shot themselves,” he said, per Reuters’ translation.

Russian forces have, in the last days, pulled back into defensive positions in central Kherson region, while Ukrainian forces have claimed the capture of a number of settlements in the region’s northeast, according to Ukraine and recent assessments from the Institute for the Study of War think tank.

Ukraine said on Friday that it had taken back around 200 square miles from Russia in one week.

Stremousov described the Russian forces’ actions as a “regrouping” and claimed they had the region “locked down,” per The Washington Post.

Shoigu is a long-time confidant and ally of Putin, having occasionally vacationed with him, and he has led the defense ministry since 2012.

The Russian Ministry of Defense did not immediately respond to Insider’s request for comment.

Until very recently, such public condemnation of military top brass was highly unusual in Russia.

But Stremousov’s remarks come on the heels of growing discontent with top military leaders and the country’s performance in Ukraine.

Hardline Chechen warlord Ramzan Kadyrov, whose own troops have been deployed in Ukraine, has grown increasingly outspoken.

In early September, after Ukrainian forces made vast gains in the northeast of the country, he suggested the defense ministry is out of touch with the situation on the ground, as The Guardian reported.

Following the fall of the eastern city of Lyman at the end of September — a considerable strategic loss for Russia — Kadyrov made bruising comments in a Telegram post about Alexander Lapin, who commands Russia’s forces in central Ukraine.

Lapin failed to effectively coordinate communications or supply soldiers properly, and the military’s General Staff covered for him, Kadyrov said.

Meanwhile Evgeniy Prigozhin, who leads the Wagner private army used by Putin in Ukraine, also made comments on VKontakte, Russia’s answer to Facebook, calling military top brass “pieces of garbage” who should be sent to the front “barefoot,” as The Daily Beast reported.

The Kremlin has trod carefully in apparent response to Kadyrov’s recent comments, admonishing him for the ’emotion” of his tone when talking about nuclear weapons.

However, on Thursday the Ministry of Defense promoted him to Colonel General, as Russian state news agency TASS reported.

Russian state TV has also started to acknowledge Ukraine’s wins, though Bloomberg reported that Kremlin is not allowing outlets to blame Putin or question the decision to invade Ukraine in the first place.