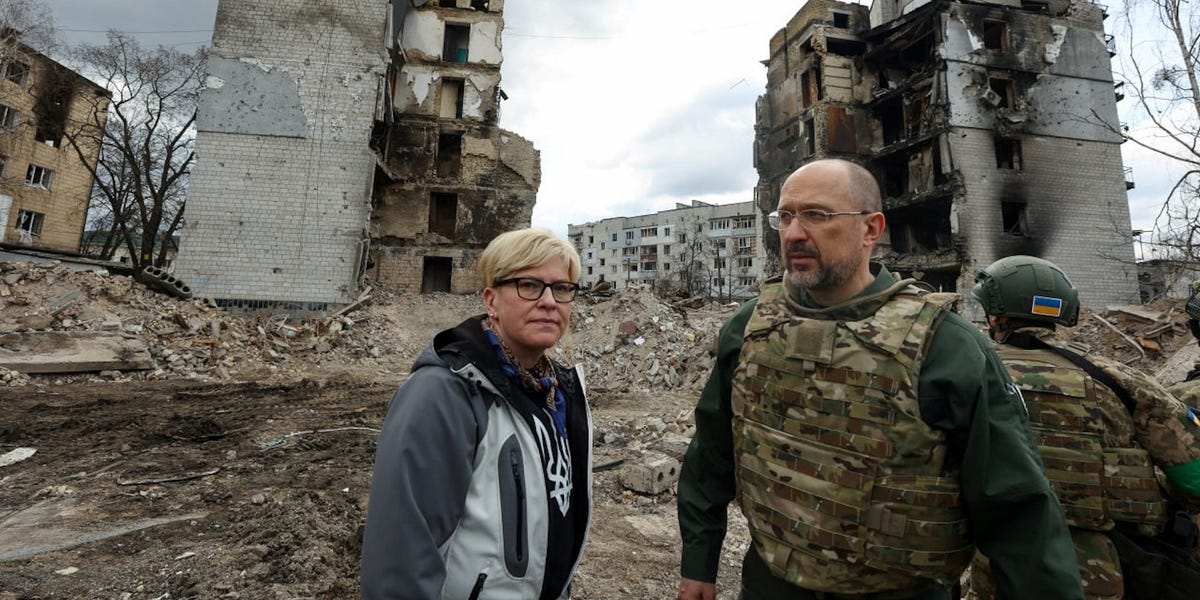 In an interview Thursday, Ingrida Šimonytė said that the frequent argument for not doing so — that Vladimir Putin might escalate his invasion in response — did not stack up.

Putin, she said, had already escalated the conflict repeatedly and did not need an excuse in the actions of his adversaries to do so again.

This week nine of NATO’s 30 members, including Lithuania, said they support Ukraine’s eventual membership of the alliance.

But NATO’s largest members, including the US and other nuclear-armed states like the UK and France, held off signing. A frequent argument is that a move like this could worsen Russia’s invasion.

But, Šimonytė argued, Russia had proven already that its escalations were not rational.

“When we speak about Russia as an escalator in this situation, we must ask ourselves: Is there a need of a real pretext for Russia to escalate? My answer is no,” she said.

“I mean, this is a pretext that they most probably would use, but even without this pretext, it doesn’t mean that the situation would be that much different.”

Bulgaria’s president said he did not join the nine-country declaration because he thought a decision on Ukrainian membership should only happen after the war with Russia ends.

He noted the “risk of the direct involvement of NATO countries in the war.”

Similarly, US national security adviser Jake Sullivan said that he thinks Ukraine’s application “should be taken up at a different time.”

Putin has previously raged at the prospect of NATO growing further, and cited that fear as a reason for invading in February.

But Šimonytė said that Russia was the one who forced countries like hers into NATO, creating the outcome it most feared.

“They were lying all the way about NATO enlargement and saying ‘it was you who were pushing NATO boundaries close to Russia.’ No — it was because of Russia that countries like mine wanted to join NATO.”

“It’s not because NATO just came and said ‘Hello, we want to be here.'”

A ‘moral debt’ to Ukraine

How Ukraine would fare in an application is unclear — all 30 existing members have to agree on letting a country join, and the process can take years even for countries who are not actively at war.

Šimonytė said that the decision not to accept Ukraine earlier helped create the current war. NATO’s assurances may have deterred Russia had Ukraine been a member, she said.

Ukraine tried to join NATO in 2008, but Russia responded angrily and the process ground to a halt.

Šimonytė said she thought this was a “great mistake” that helped encourage Russia’s annexation of Crimea in 2014, its long war in the Donbas region, and the full-scale war of 2022.

She said that NATO owes “a sort of a moral debt” because of such missteps that demands a fuller response than giving the current military aid and training.

NATO had previously said that Ukraine needed other reforms to be considered for membership — including a much stronger response to corruption.

Šimonytė said she believed starting negotiations would create a “very strong incentive” for any needed reform, saying it worked in her own country, which joined in 2004.

“What I know from my country’s experience is that when you have a very clear goal, it is a very big motivation for a country to change.”

“What Ukraine has demonstrated is that they are actually capable, very strong and, and very committed to the values that we share as our sort of basis for our coexistence. So why should we deny them a possibility to be part of the club?”

“There is no reason.”