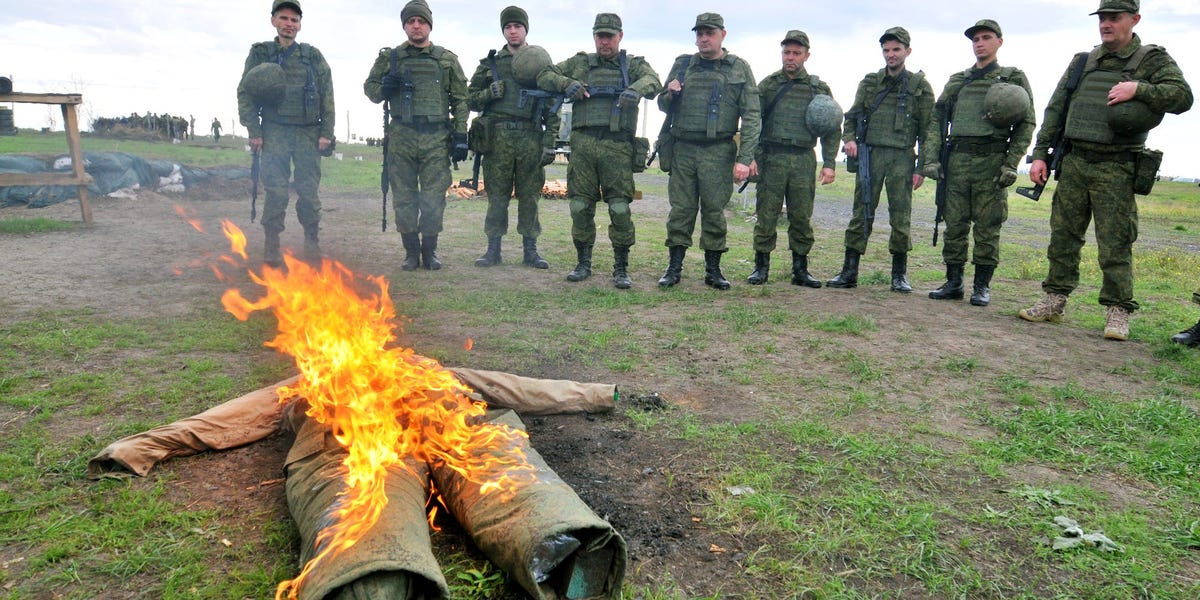 As Russia’s new mobilization drive scoops up reluctant and ostensibly ineligible conscripts — including the elderly and disabled — it is stirring memories of another war.

Ironically, as Soviet armies advanced on Berlin almost 80 years ago, it was Nazi Germany that was drafting old men and children into the Volkssturm (“people’s militia”) in a futile last-ditch effort to stave off defeat.

It was part of the Nazi regime’s “total war” strategy, which aimed to reorient civilian resources and infrastructure toward fighting off the Allies.

By late 1944, after five years of war, most fit, young German men were already in uniform — or buried in the steppes and deserts of Eastern Europe and North Africa — prompting Nazi leaders to widen their sweep.

Russian President Vladimir Putin doesn’t even have that excuse. The invasion he launched in late February was poorly planned and improperly managed, and it was carried out by a force that was too small for the task and took far heavier losses than expected.

While Russia still has a military draft, only about 30% of its troops are conscripts, with the remainder contract soldiers. Fear of antagonizing public opinion has made the government hesitant about expanding the draft.

But with Russian forces in Ukraine wilting against Ukraine’s counteroffensive, there haven’t been enough volunteers to compensate for the casualties — estimated to be more than 60,000 so far — in an increasingly unpopular war.

Hence, Putin signed an executive order for partial mobilization on September 21. Moscow’s stated goal is to raise 300,000 new soldiers, though a secret clause in the order suggests that up a million men could be drafted.

Some provisions would be familiar to Americans who served in Afghanistan and Iraq, such as a restriction allowing only the call-up of Russians with military experience and a stop-loss order retaining soldiers whose enlistments were up.

But the hundreds of thousands of Russian men fleeing the country know better. Reports suggest not a mobilization but a dragnet scooping up anyone it can get, including those who never served in the military, disabled citizens, and those normally too old for military service.

Even pro-Kremlin figures have documented the indiscriminate nature of the call up.

Margarita Simonyan, editor in chief of state-backed media outlet RT, compiled a list of such cases on Twitter, including a 63-year-old reserve lieutenant colonel with diabetes and cerebral ischemia who was still deemed fit for duty and a 35-year-old with a spinal fracture and artificial vertebrae.

Amid domestic backlash to the call up, Russian leaders, including Putin, have admitted there were mistakes. Authorities have rescinded some of those conscription orders and some conscripts home.

Some in Russia believe that ethnic minorities and residents of poorer, more remote regions are being targeted, but even men in big cities are being handed draft notices while walking on the street.

There is even a punitive aspect to it: Convicts are being given a choice of the army or prison, while Russians seeking to leave the country are being slapped with call-up papers while waiting at border crossings.

Much like the Third Reich in 1945, Russia is playing for time. Hitler believed that if Germany could hang on long enough, the US-British-Soviet alliance would fall apart and the Third Reich would be saved.

Putin seems to believe that if he can prolong the war while cutting Europe off from Russian oil and gas during winter, freezing and exhausted Europeans will demand that their governments cease aiding Ukraine.

The gamble didn’t pay off for Hitler, and it probably won’t pay off for Putin. When fear of Russian expansion drives Sweden into abandoning 200 years of nonalignment by joining NATO, it’s a sign that Moscow’s threats aren’t working.

The question is the human cost of a dictator’s stubbornness. The Volkssturm and Hitler Youth were poorly trained and equipped and died in droves. Yet their cheap but effective Panzerfaust rockets still took a toll on Allied tanks at roadblocks and in city streets.

This exasperated Allied soldiers, who couldn’t understand why their buddies — and German kids — had to die when the war was so obviously lost.

Those new Russian soldiers will receive barely any training. Their weapons will mostly be old Cold War-era gear in poor condition, because Russia has already lost its best equipment and Western sanctions prevent it from manufacturing more.

They will have a certain military value as boots on the ground, but more likely they will be cannon fodder in a conflict where artillery and tanks are the decisive weapons.

What mobilization will do is make the war personal for the Russian public, who will see their sons sent off to a lost war. The same phenomenon has in the past helped undermine regimes in Moscow and stoked unrest in the US. This bodes ill for Putin.