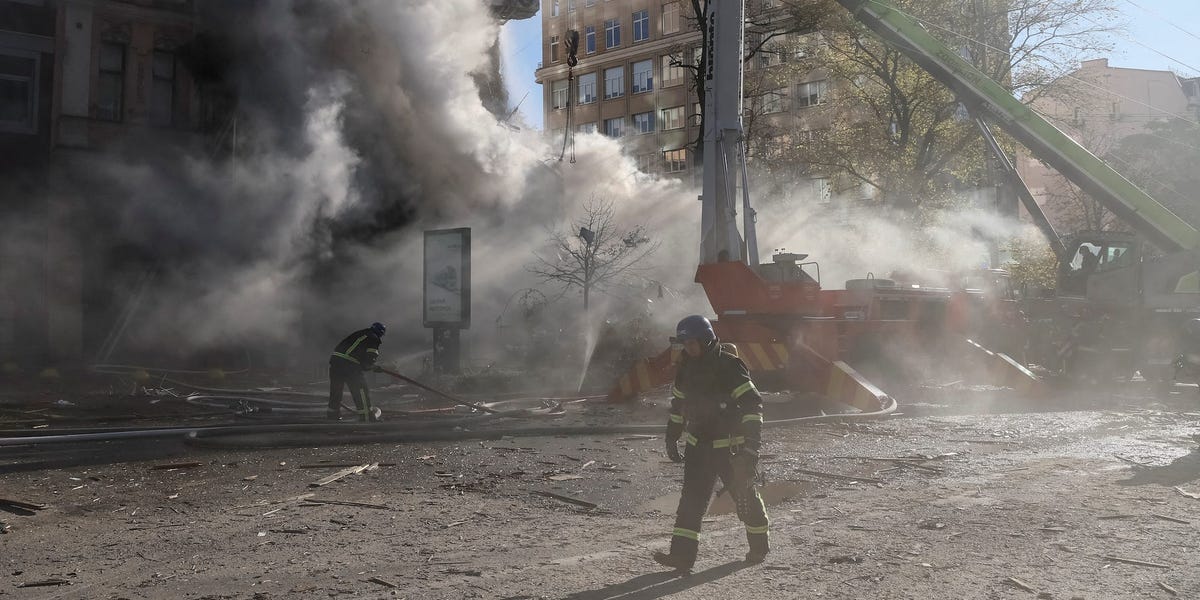 Russia launched a new attack on Ukraine’s capital on Monday, with Ukrainian officials saying it used a swarm of Iran-made “suicide” drones in its bombardment.

At least one person in Kyiv had been confirmed dead, while rescuers were searching for more in the rubble, mayor Vitali Klitschko said not long after the explosions.

Residents fled to shelters as air raid sirens went off, and Ukrainian troops tried to shoot down the drones that Ukrainian officials said were single-use “kamikaze drones” which explode on contact.

Multiple officials said that these drones were used in the attack, including Klitschko, interior ministry advisor Anton Gerashchenko, and presidential advisor Andriy Yermak.

Ukrainian President Volodymyr Zelenskyy said the drones were being used in multiple attacks across Ukraine on Monday.

“All night and all morning, the enemy terrorizes the civilian population. Kamikaze drones and missiles are attacking all of Ukraine. A residential building was hit in Kyiv.”

Photos showed Ukrainian troops trying to shoot down the drones.

Gerashchenko said the building in Kyiv was “hit by an Iranian drone.”

Emine Dzheppar, the first deputy minister of Foreign Affairs of Ukraine, said the strike was done “by Iran-made kamikaze drones this morning.”

Iran on Monday repeated its denial that is has supplied any drones to Russia. A foreign ministry spokesperson said “We have not provided weaponry to any side of the countries at war,” Reuters reported.

But Russia has already been using Iran-made drones in its invasion.

And US intelligence officials told The Washington Post that Iran has agreed to send more weapons to Russia, including surface-to-surface missiles and more drones.

Russia has launched a significant amount of its equipment as it loses to and retreats from Ukrainian forces in the east.

US officials said earlier this month that Russia turning to pariah states like Iran and North Korea is a sign that it is suffering on the battlefield.

The drone attack marks a change in Russia’s strategy, showing a renewed focus on hitting Kyiv despite the capital being far from the front lines.

Russia also until recently relied on missiles, rather than drones, to attack Kyiv, the AP noted.

Insider’s Jake Epstein last week reported that military experts believe Russia had burned through much of its cruise-missile supply.

Kyiv residents described to Insider how last Monday’s missile attack on Kyiv shattered what had been a slow return to more normal life in the city, to which many people fled from the more dangerous eastern and southern parts of the country.

Western and Ukrainian leaders described Russia’s new attacks on Kyiv as an act of desperation prompted by its army’s loses on the battlefield.