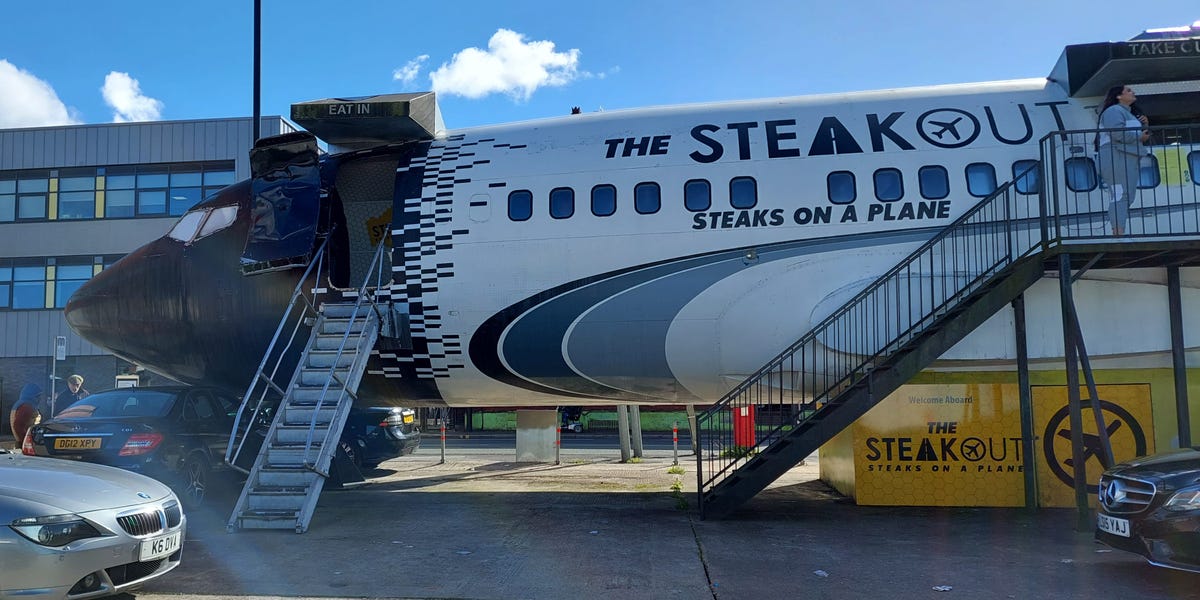 
A Boeing 737 fuselage has been converted into a restaurant selling steak, chicken, and fries in Bolton, northern England.

The restaurant is officially called The Steakout, but it also goes by the tagline “Steaks on a Plane.” It describes itself as a “unique dining experience.”

This is the restaurant as you approach from the sidewalk. The plane is surrounded by cars, presumably owned by staff and diners, and the restaurant’s planning permission included eight parking spaces.

In a 2016 report, local planning officers said a restaurant in a converted fuselage would be “innovative” and an “unusual feature” that could improve the appearance of the area.

The plane’s wings have sadly been cut off. It had a large electronic screen on the side, but it wasn’t turned on when I visited. The screen was originally intended to house digital advertisements, but the Highways Authority didn’t support the plan, saying it could distract drivers. It’s unclear whether it has ever been used.

There was also this bizarre contraption, which looked like it may have been sending oil to the kitchen, or otherwise removing waste.

This is what the restaurant looked like from the other side.

There were two flights of stairs up to the restaurant – one for dine-in customers and one for people buying takeout.

Walking up the stairs for dine-in customers, you could turn right for the dining room – or left to enter the cockpit.

The cockpit was fun to see inside, with LED lights recreating the view from a plane window…

… but it looked a little grubby up close.

“Adults come in and play in the cockpit,” its owner told The Manchester Evening News in 2017. “The adults love it more than the kids I think.”

But while I was there, the only other diners I saw venture into the cockpit were a young child and his family.

The plane’s original interior had been ripped out and replaced with built-in booth-style tables and chairs. The open kitchen was located at the back, and there were no restrooms.

The views from the windows weren’t as exciting as they are when you’re midair: Out of one side you could watch the traffic go past, while out of the other you could see cars come and go in the parking lot.

When the restaurant first opened in early 2017, the decor probably looked fun and modern.

The restaurant had an extensive menu, though most dishes on it were variations of sliced beef or chicken, served with accompaniments like cheese, fries, a fried egg, and salad, or in a burger or wrap.

I’d never had a Philly cheese steak before, and it didn’t look quite like I’d expected. The portion of fries was covered with thinly-sliced beef and sautéed onions, and then drowned in a mound of grated cheese.

I personally don’t like beef, but I felt like I should try The Steakout’s namesake dish. The steak, sliced into very thin pieces, wasn’t able to convince me. The fries were delicious, though, and the service was fast. There were a number of sauces dotted round the tables in large tubs.

And as I made my way through the meal, the cheese did start to melt. Despite opting to dine in, everything was served in the same polystyrene trays used for takeout customers, and I was given disposable cutlery to use.

The restaurant is around 15 miles from the center of Manchester, just over the road from the University of Bolton, and is also close to a college. The Steakout was previously operated from a red double-decker bus on the same site the plane is now on.

There were other fast-food joints just over the road from The Steakout.

But The Steakout seemed to have a steady stream of customers when I was there. The other diners in the restaurant seemed to be largely students, probably lured in by the cheap prices and quick service.

Personally I’m not in a rush to go back to The Steakout, but that’s mainly because I don’t like steak.