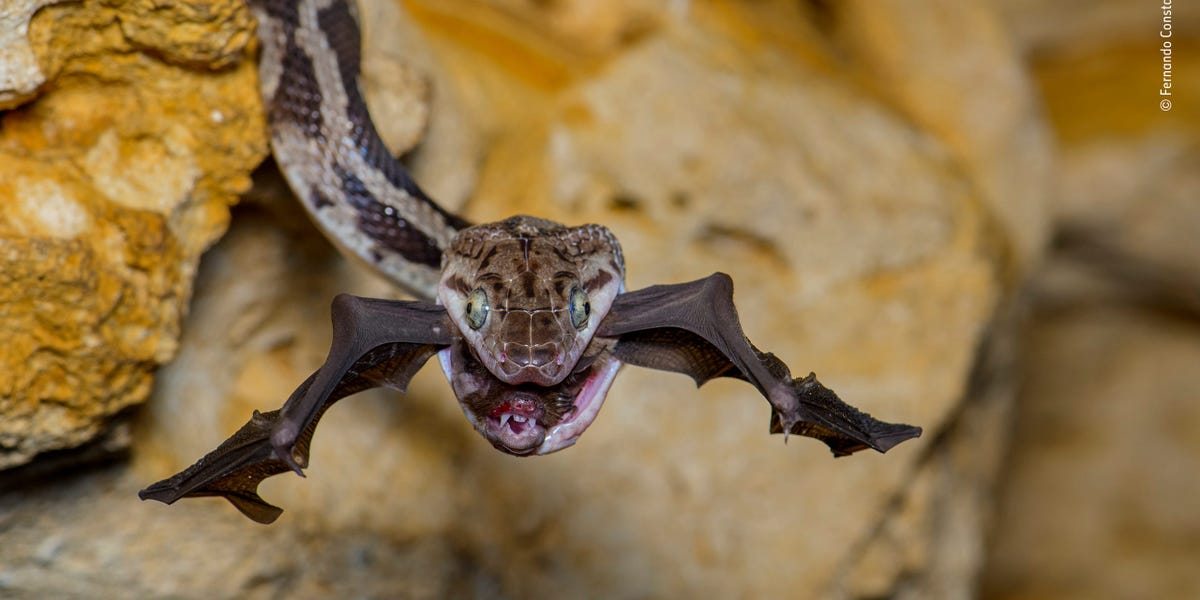 The best wildlife photos of 2022 include a ball of bees, a snake eating a bat, and polar bears raiding an abandoned town

As a ball of swarming cactus bees rolled across the hot Texas sand, Karine Aigner trained her camera on the spectacle.

The cactus bees, like most other bees, are endangered by habitat loss, pesticides, and the changing climate. But that didn’t stop this cluster of buzzing insects from trying to multiply. All but one of the bees in that ball were male, swarming around a single female. As they clamored for an opportunity to mate, Aigner’s camera lens clicked.

The resulting photo, above, won the Grand Title in this year’s Wildlife Photographer of the Year competition, which is developed and produced by the Natural History Museum in London each year.

From more than 38,000 entries, Aigner’s photo and 19 other category winners stood out.

“Wings whirring, incoming males home in on the ball of buzzing bees that is rolling straight into the picture. The sense of movement and intensity is shown at bee-level magnification and transforms what are little cactus bees into big competitors for a single female,” Roz Kidman Cox, who chaired the judges panel, said in a statement.

Other winning photos reveal animals, birds, and sea creatures in the throes of life: hunting, being hunted, wandering, dying, dancing for potential mates, and struggling to survive as their world gets smaller.

Katanyou Wuttichaitanakorn, a 16-year-old from Thailand, was on a whale-watching tour when a Bryde’s whale surfaced near the boat. Struck by the whale’s dark skin, pale pink gum, and brushy mass of baleen teeth, he snapped a picture. It snagged Wuttichaitanakorn’s first award in the competition.

“The pin-sharp detail of the tiny anchovies is set against an abstraction of color, with the weave of brown baleen hair rimmed by a cascade of water drops,” Cox said.

In another winning photo, a snake captured a spooky snack

In the Cave of the Hanging Snakes, in Quintana Roo, Mexico, Fernando Constantino Martínez Belmar waited in the dark as a Yucatan rat snake poked its head from the rock ceiling. Just like every night, as thousands of bats swarmed out of the cave, the resident snakes waited for just the right opportunity to lunge from their hiding places and snatch a meal.

Using a red light that would be less disruptive in the dark, Martínez Belmar captured the hunt in the split moment before this snake retreated with its prize.

A snow leopard pursued its own, much bigger, prey

Across a ravine in the Himalayas, Anand Nambiar watched this leopard maneuver uphill from a herd of ibex, then charge them toward a steep cliff.

Snow leopards are at risk of extinction, due to hunting, climate change, and mining that destroys their habitat.

Spectacled bears are the only bear species native to South America, and their numbers are dwindling. The disappearance and fragmentation of their habitat has culled them to just a few thousand.

Photographer Daniel Mideros captured one of those bears with a camera he set up on a wildlife corridor, which bridges fragments of habitat between human settlements in Quito, Ecuador.

A beloved mountain gorilla died in her caretaker’s arms

Ndakasi was rescued at two months old, after her troop of gorillas was massacred. Photographer Brent Stirton was there to capture her rescue, and returned 13 years later to capture her death, as she laid in the arms of her lifelong caretaker, Andre Bauma, at Virunga National Park, in the Democratic Republic of the Congo.

“I loved her like a child,” Bauma told the BBC after her death in 2021. “Her cheerful personality brought a smile to my face every time I interacted with her.”

The island of Kolyuchin, in the Siberian Chukchi Sea, lost its human inhabitants long ago. The abandoned settlements there have a new population now: wandering polar bears.

Dmitry Kokh was aboard a yacht, sheltering from a storm, when he spotted the bears moving in and out of buildings on the distant island. He flew a drone out to photograph them.

One small bird listened to the earth…

This young grey-breasted wood wren was foraging when photographer Nick Kanakis happened by. The ground-dwelling bird hopped through the leaf litter in Colombia’s Tatamá National Park, listening to the ground for the faint squirms of small insects — lunch for the wren.

…while a showy bird puffed out its chest feathers

The Canary Islands houbara does a frantic courting dance. From a spot he dug out, José Juan Hernández Martinez watched the whole thing. The houbara raises the plumes on the front of its neck, throws its head back, sprints forward, circles back, and pauses a moment before starting over again. This photo shows its full puffy glory during that brief pause.

A sea star performed its own eerie mating dance

Birds may have to impress their mates, but sea stars only have to spawn. Still, to set up their spawns for success, they must dance. Rising, swaying, pulsing, and undulating may help release the eggs and sperm, or send them into currents of water so they mix and fertilize. As clouds of sea-star sperm and eggs filled the water, photographer Tony Wu captured this otherwordly invertebrate in the throes of its dance.