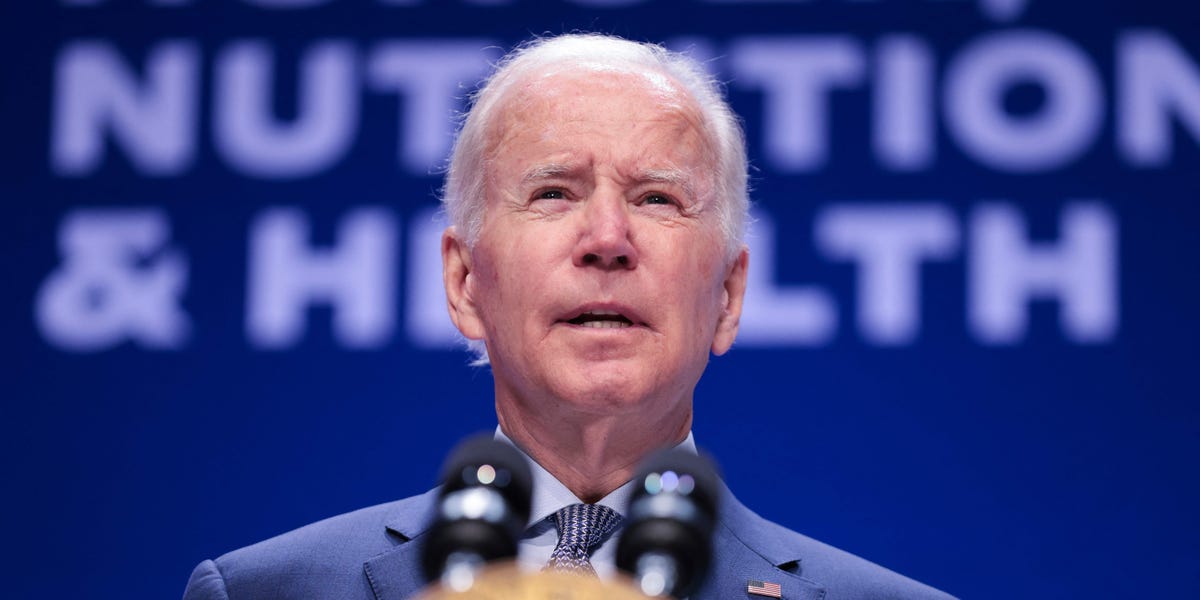 The latest inflation report was the worst-case scenario for Biden, the Fed, and the stock market

But the September inflation report was crystal-clear in showing trouble ahead. Nearly every detail within painted a bleak picture of the country’s near-term future and made a self-induced recession even more likely.

The Consumer Price Index rose 0.4% in September and showed a year-over-year pace of 8.2%, both measures surpassing economists’ forecasts. Core inflation, which excludes volatile food-and-energy prices, jumped 0.6% last month, with a year-over-year gain of 6.6%. That marked the fastest core-price growth since 1982.

The details of the report were just as dire. Shelter inflation replaced food and gas prices as the biggest driver of headline inflation, accelerating to the fastest one-year pace since 1982 as well. Inflation for medical care and transportation services like airlines and mass transit also worsened throughout the month.

For the Federal Reserve, the new data makes its battle against inflation — which has included multiple historically large rate hikes — look futile. For the stock market, the prospect of further Fed tightening is a major headwind with indexes already near 2022 lows. And the White House now has to grapple with a fresh batch of negative inflation headlines mere weeks before the hugely consequential midterm elections.

Investors stare down a market reckoning

The stock market’s path through 2022 has been a simple one: If it looks as if the Fed will slow its hiking cycle, investors cheer and stocks rally. Conversely, signs that the central bank will keep tightening typically lead to sudden declines and fears of an economic downturn.

The first hours of Thursday’s trading session met that precedent. The S&P 500 plummeted as much as 2.4% soon after markets opened as investors read the report as a clear sign that the Fed will continue its hiking plans, though those losses reversed themselves by midday and stocks rebounded into the afternoon.

Options traders are now pricing in 0.75-point rate hikes for both the Fed’s November and December meetings. Such moves would firmly press the brakes on economic growth.

That leaves stock investors with a steep uphill climb through the rest of this year and 2023. Higher rates make borrowing more expensive for companies, which typically slows firms’ profit growth, and traders will set an even higher bar for companies to clear when they start announcing their quarterly earnings.

“These inflation numbers will be a major pain point for the markets. The coming earnings season would have to be doubly strong to offset the strong headwinds of will be an ever-aggressive Fed,” Yung-Yu Ma, a chief investment strategist at BMO Wealth Management, said. “Earnings season might not be bad, but being strong enough to reverse this tide will be a tough go.”

With several large rate hikes surely on the way, trading is likely to get more volatile before cooling down.

The September CPI read might’ve made investing a whole lot more complicated, but it makes the Fed’s decision process much easier.

Projections central-bank officials made in September already signaled the Fed would raise rates by another three-quarters of a percentage point in November before easing to a half-point hike at its December meeting. Market positioning heading into Thursday morning echoed that projection.

The new inflation data changed outlooks in a matter of minutes. Markets are now bracing for back-to-back 0.75-point hikes through the end of the year as well as continued hiking through early 2023.

“After today’s inflation report, there can’t be anyone left in the market who believes the Fed can raise rates by anything less than 75bps at the November meeting,” Seema Shah, the chief global strategist at Principal Asset Management, said. “Slowing growth yet rising inflation — the combination none of us, and least of all the Fed, want to see.”

With Fed officials consistently hinting that their tightening plans are far from complete, significantly higher interest rates are practically a given for at least the next year.

The Thursday report was the last opportunity for Democrats to win a surprise inflation cooldown they could campaign on through Election Day.

What they got was a worst-case scenario. Republicans already favored to wrest control of the House now have a new talking point that’s relevant to all Americans, and as campaigns enter their final sprints, surging inflation could even dent Democrats’ hopes to keep the Senate.

That likely dooms the Biden administration to a dull two years before the 2024 elections. Democrats’ fragile control of Congress allowed President Joe Biden to pass much of his legislative agenda, albeit with many packages slimmed down. Yet much of the blowback — from Republicans and moderate Democrats alike — centered around the policies putting more cash into the economy when inflation was on the rise.

With core inflation higher than it was at any point during the pandemic, Republicans are poised to push spending cuts and deficit reduction should they take the House. Chances at bipartisan policymaking will be few and far between, and until inflation shows clear signs of easing, the GOP will likely aim to reverse many of the White House’s recent victories.