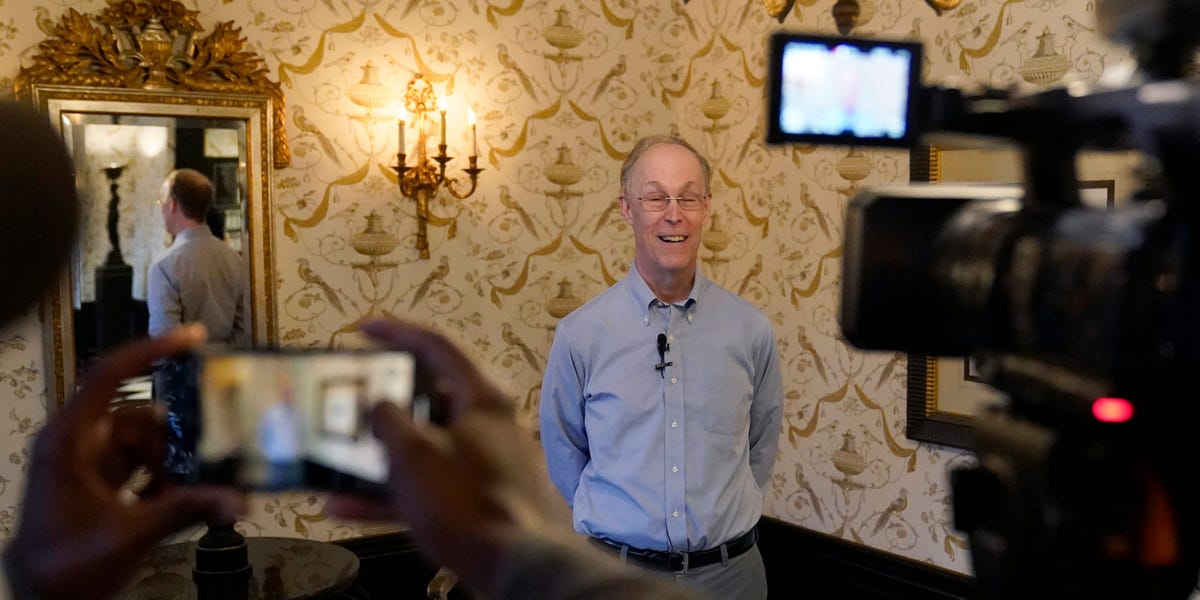 Forecasts of a 2023 recession are worsening, inflation is still historically high, and the labor market is softening.

The last thing the US needs right now is another financial crisis, but two trends leave the country exposed to such a catastrophe, Douglas Diamond, one of the three economists to win the Nobel Memorial Prize in Economic Sciences on Monday, told Insider.

Diamond knows a thing or two about the financial system and its vulnerabilities. He and his colleague Philip Dybvig — with whom he shared the Nobel prize, along with former Federal Reserve Chair Ben Bernanke — wrote a hugely influential paper in 1983 that explained the role banks serve in the economy. The two detailed how banks act as valuable intermediaries in taking savers’ deposits and offering long-term loans to businesses and other borrowers.

Yet that balance can quickly unwind if the right backstops aren’t in place. If trust in the financial system fades, an onslaught of savers can pull their cash at once and bankrupt the very banks that prop up the entire system, Diamond and Dybvig wrote.

That’s what happened during the financial crisis in 2007. The subprime mortgage meltdown tanked public trust in banks and kicked off the Great Recession as Americans’ spending plunged.

Banks are in “much better capital positions than they were” before the Great Recession, Diamond, a professor of finance at the University of Chicago’s Booth School of Business, said. Yet the coronavirus crisis and the following inflation spell have thrown the financial system into a sea of uncertainty.

‘Fear of fear itself’ can spark a vicious cycle, in the case of unexpected policy changes

Amid soaring inflation and the Fed’s historically intense fight against rising prices, it might not take much for distrust of the financial sector to grow. Financial crises are inherently unpredictable, and faster-than-usual rate increases could be enough to throw off the public’s sense of security, Diamond said.

“It takes at least somewhat unexpected events to cause a financial crisis, or the type of run where there’s enough loss of confidence and loss of net worth to get people rushing to the exits before others get there,” he told Insider. “The ‘fear of fear itself’ or self-fulfilling prophecy kind of run.”

So far, the Fed’s avoided such a surprise. The central bank has previewed its rate decisions effectively in the weeks before their policy meetings, leading investors and economists to have at least a fairly reliable forecast of how high interest rates will move.

That security isn’t a given, and recent events in the UK provide a prescient example of how unexpected policy can shock the public. After Prime Minister Liz Truss’s tax proposals slammed the pound and government bonds, the Bank of England was forced to step in with limitless bond purchases to buoy the market. The move undermined the bank’s efforts to cool inflation by pumping more cash into the struggling economy, and while some of the damage has since been mitigated, the episode has eroded trust in the UK’s financial sector as evidenced by a weaker pound and higher yields on government debt.

With the pandemic, the Russia-Ukraine war, and a global slowdown creating huge uncertainties, the Fed isn’t safe from a similar episode. Unexpected rate moves could be enough for investors to move their money around and sow some discord in financial markets, Diamond said.

“Let’s say you knew that interest rates were going to go up by 300 basis points next month. You would plan in advance to make sure you didn’t have a portfolio that was going to get wiped out,” he said. “Financial crises have to be reasonably unpredictable if people are being at all sensible about how they allocate their funds.”

The Fed’s rapid-fire hiking cycle is made all the more potent by the long period of near-zero rates that preceded it. Businesses and borrowers expected short-term rates “to stay basically constant and around zero for a good long period,” Diamond said. In other words, it’s been relatively cheap for people to go into a credit card, car, mortgage, or any other kind of debt.

“People were not buying insurance through long-term debt or through interest-rate swaps,” he told Insider. “With that circumstance, when you actually raise interest rates in a hurry, you’re going to be really exposed. That’s why we’re really exposed right now.”

The Fed’s rate hikes may seem small — fractions of a percentage point — on their own, but they can add up to a significant financial burden. The increases lift borrowing costs throughout the economy, hitting all kinds of loans from mortgages to credit card debt. Mortgage rates, for example, have spiked from 4.2% when the Fed began this cycle of rate hikes to 6.9% now.

Interest rate increases also make companies’ debt much pricier to service, which in turn raises the risk of bankruptcy. If consumers and businesses start to feel a credit crunch, it could set off a vicious cycle similar to what the world went through in 2007.

Fed officials have also made it clear that their hiking plans are far from complete. Projections published by the central bank signaled policymakers will lift its benchmark rate by another three-quarters of a percentage point in November and a half-point in December. Thursday’s worse-than-expected inflation data led the market to brace for even more aggressive action.

As rates leap higher and intensify debt burdens on companies and borrowers, the chances of financial-system pain will rise in kind.