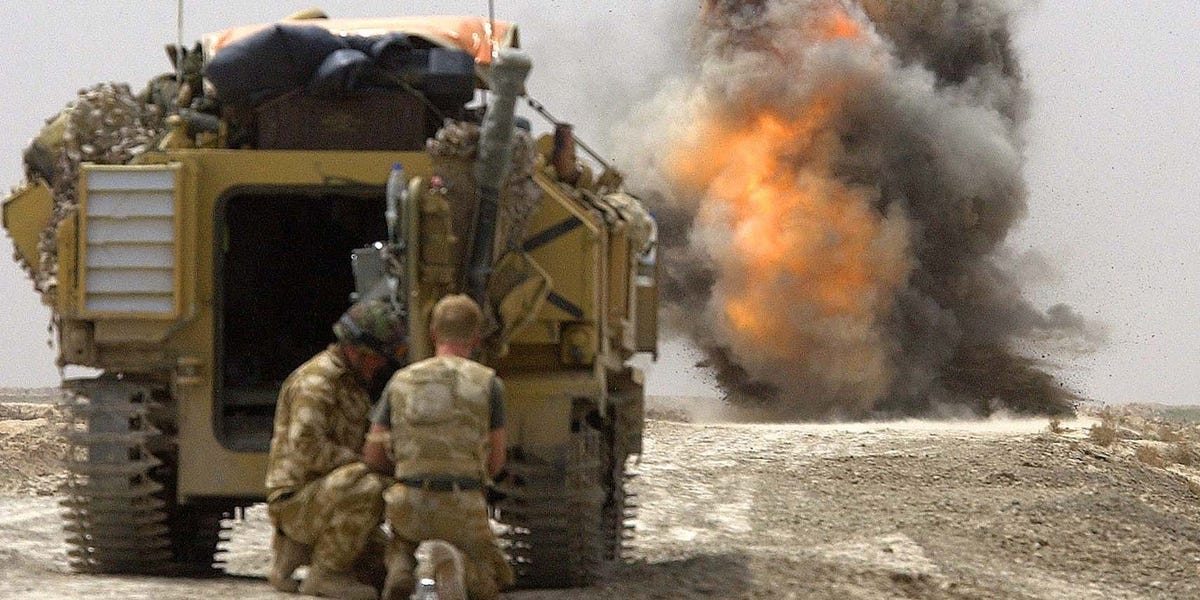 The US Army is developing a smart anti-tank mine that detects the sounds of enemy vehicles and then destroys them with an armor-piercing slug.

Gone are the World War II-era buried mines that resembled dinner plates or Frisbees. The XM204 looks like a large suitcase, and instead of clothes it carries four top-attack submunitions that pop up and hit the thinner armor on the top of a tank.

The Army recently awarded Textron a $353 million contract to produce the XM204, which is also being designed to pose less danger to civilians who might come across it.

The Army doesn’t call the XM204 a landmine, and for good reason. Mines have been widely condemned because of the harm they do to civilians even decades after they are deployed.

In June 2022, the Biden administration committed the US to joining many other nations in refusing to buy or deploy anti-personnel mines anywhere except the Korean Peninsula.

Instead, XM204 is described as a “wide area top-attack munition” or a “terrain-shaping obstacle.” The weapon uses acoustic sensors to detect and identify incoming tanks.

“It can ‘hear’ tracked vehicles and feel them coming,” an Army researcher said in a press release. “When it does, it uses a mechanism that starts tracking the vehicle. When the threat-tracked vehicle is a certain distance away, the XM204 will shoot a submunition into the air to fire the warhead down at the target within its zone of authority.”

A Textron executive told Jane’s that each XM204 weighs about 80 pounds. The acoustic sensor detects oncoming vehicles and a Doppler radar pinpoints a vehicle’s exact location.

The Army envisions the weapon as a way to channel the movement of enemy forces. When US troops are in open terrain, without forests or rivers to block enemy armor, they can deploy an instant minefield to constrict the enemy’s room to maneuver.

However, the weapon also seem suitable for more aggressive emplacement. US special-operations forces could deploy the XM204 behind enemy lines to block highways and bridges.

Particularly interesting is whether the weapon will eventually be given to Ukraine. Ukrainian commandos or guerrillas would have a field day placing the weapon on key Russian roads and supply routes.

The Army hasn’t released technical details for the XM204. However, in April 2021, the Army posted a sources-sought announcement for companies that could develop a “Terrain Shaping Obstacle (TSO) Top Attack prototype.”

The announcement mentions a control station that could remotely operate up to 12 minefields that are up to 3.1 miles away.

The maximum range of the munition itself isn’t listed, except for a minimum standoff distance of roughly 164 feet. The Army also desired a munition that could be remotely controlled from up to 186 miles away.

The XM204 isn’t the first top-attack mine. In the 1990s, the Army developed the M93 Hornet, also built by Textron.

The M93 sounds similar to the XM204, except that it appears to have fired a single munition that used infrared homing to target a tank and then fired an explosively formed penetrator — a self-forging molten slug of metal — into the top of it.

More recently, Russia has reportedly employed its PTKM-1R top-attack mine in Ukraine. The weapon, which looks similar to the M93 Hornet, appears to rely on acoustic sensors to detect vehicles.

However, unlike the M93 and XM204, the PTKM-1R’s instructions suggest it does not have 360-degree coverage and needs to be pointed at the target.

The XM204 will replace the US military’s aging suite of artillery- and air-delivered cluster mines, known as the Family of Scatterable Mines. Such weapons drew the ire of anti-landmine organizations.

After the first Gulf War, GAO investigators found that many US mines were duds — creating entire “dudfields” — and that their self-destruct mechanisms didn’t always work.

Still, a minefield in a suitcase is an appealing concept, especially for special operators, light infantry, and guerrillas who lack heavy weapons to stop enemy armor. For those who don’t have their own tanks, an instant minefield may be the next best thing.