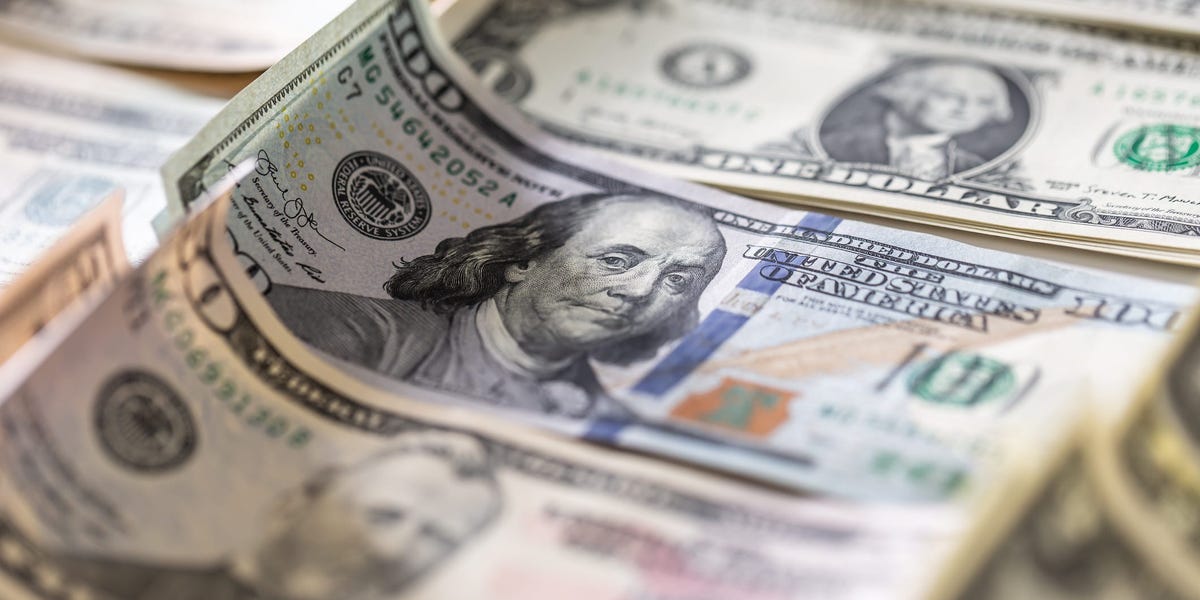 The US dollar has surged this year. The world’s largest wealth manager explains why that dizzying rally isn’t done yet.

There’s a key US jobs report dropping at 8:30 a.m. today. It may seem like nonfarm payrolls have been a B-list macro datapoint since the Consumer Price Index has taken the spotlight all year, but the September report is of particular importance.

The Fed will be watching very closely for signs the labor market, and thus the economy, is cooling off, feeding into its decision making over the path of rate hikes. Economists are expecting 250,000 new jobs added in September, which would be down from 315,000 in August.

While we wait for the jobs report, let’s turn our attention to the dollar, which according to UBS, isn’t done rising yet.

Let’s see what they have to say.

1. The surging US dollar has yet to peak. That’s according to UBS, which thinks the Federal Reserve is unlikely to start cutting interest rates any time soon, keeping the dollar rising against rival currencies globally.

The greenback has already flown up 16.7% this year, bolstered by Fed rate hikes and weaknesses among major counterparts. But hopes of a pivot in the Fed’s policy pumped the brakes on its rise recently, with the US dollar index, which measures the buck against a basket of six currencies, retreating on the speculation fueled by a fall in US job openings and a lower-than-expected rate increase in Australia.

However, UBS’s analysts, led by CIO Mark Haefele, said in a note to clients this week that it’s too early to call a peak in both Fed hawkishness and the US dollar.

“The number of job openings in the US remains much higher than those unemployed, while the latest core personal consumption expenditure price index showed that inflation is still elevated,” the note read.

“Fed officials including Chair Jerome Powell have stressed that the central bank’s job is not yet done.”

Against a backdrop of global uncertainty amid the war in Ukraine, the pressure weighing on the euro is likely to prop up the dollar in the near future, UBS says.

The monthly jobs report today will give more insight into the labor market and what the Fed might do — and the likely future path of the dollar.

Do you think the dollar still has room to rise? Let me know at hbullock@insider.com or tweet @hallam_bullock

2. US stock futures rise early Friday, ahead of the key nonfarm payroll preview data. Meanwhile, hackers have stolen at least $100 million in tokens from crypto exchange Binance. Here are the latest market moves.

4. Watch for these three key events that will determine if stocks are headed for a dramatic decline or a “lights-out rally.” David Keller, the chief market strategist at StockCharts.com, shared critical trading levels and possible catalysts to watch right now.

5. Wells Fargo says a single massive options trade fueled a 2% positive reversal in the S&P 500 on Wednesday. The firm said the options trade was worth $31 million and is a bet that stocks will rally into year-end. Here’s the full story.

6. Saudi Arabia is lowering oil prices for Europe, but raising them for the US. Last month, it was a similar story: prices down for Europe, but up for the US. It comes after the White House accused OPEC+ of “aligning with Russia” in cutting its production quota. Read more here.

7. Ex-Treasury chief Larry Summers warned the Fed may need to hike rates above 5% to defeat inflation. He also predicted the cost would be a severe recession, and unemployment surging to about 6%.

8. David Rubenstein sees Warren Buffett as the ultimate investor. Rubenstein interviewed 22 of the world’s best investors for his new book, “How to Invest: Masters on the Craft,” but dedicated the entire compilation to Buffett. He laid out the 12 traits and habits that are key to Buffett’s success.

9. A personal finance expert shared his top financial advice for women in their 20s, 30s, 40s, 50s and 60s. As women are moving up in their careers, starting businesses, investing and making more money, their financial goals and needs are constantly changing. Ernest Burley, CFP, who has been in the financial planning industry for over 25 years, laid out some of the biggest financial moves a woman can make in her life, decade-by-decade.


10. Middle Eastern powers are pushing the price of oil higher right before crucial midterm elections. OPEC+ is adding political pressure on the Biden administration by slashing its oil production by 2 million barrels per day — and the White House is not happy about it.