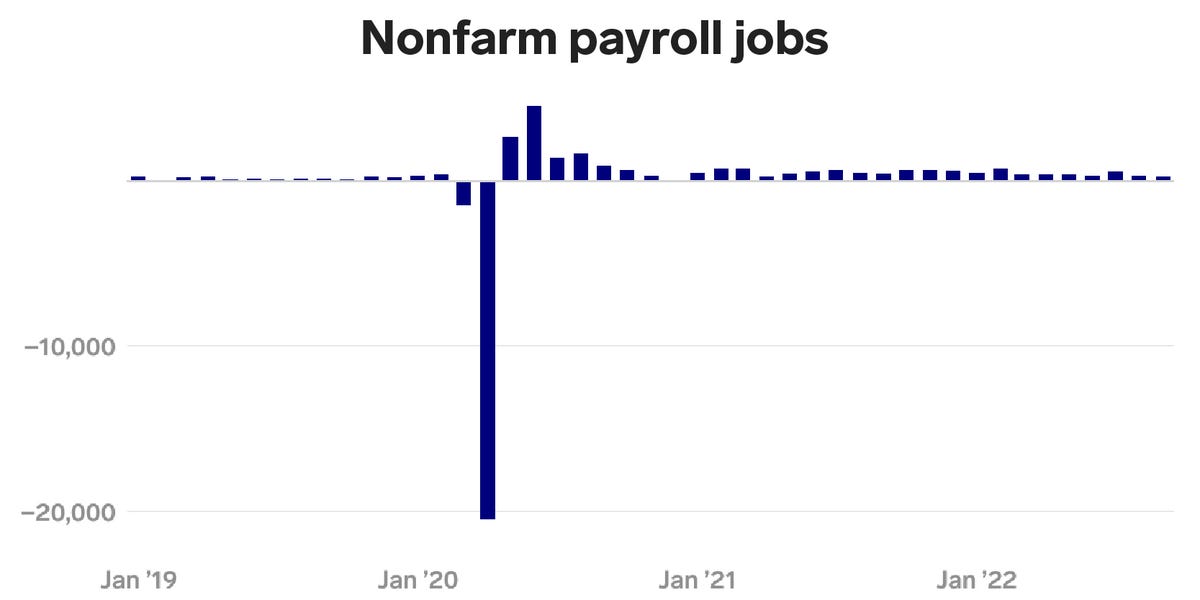 The US economy is still adding a solid number of jobs, and falling unemployment is ramping up pressure on the Fed


The white-hot labor market is on its way out, but is still going strong for now.

The US economy added 263,000 nonfarm payrolls in September, the Bureau of Labor Statistics announced Friday morning. Economists surveyed by Bloomberg expected jobs to increase by 250,000. The print shows payroll growth slowing into fall amid easing consumer demand, rising interest rates, and fears of an impending downturn.

The unemployment rate fell to 3.5% through the month, beating the median forecast of 3.7%. The rate edged slightly higher earlier in the summer as more Americans started looking for work; the unemployment rate counts workers actively seeking jobs, and as more join the workforce, that can lead to a higher share of unemployed job seekers.

The latest reading of the labor force participation rate suggests the return of sidelined workers will be a slow one. The measure fell to 62.3% from 62.4% through September.

The report reflects yet another month of better-than-expected job creation, yet it puts the Federal Reserve in an uncomfortable spot. The central bank has highlighted the labor market as an area of extreme imbalance and noted that the gap between labor demand and worker supply threatens to keep inflation elevated. Officials likely want to see that demand ease for a period, yet the September report shows few signs of a hiring slowdown.

Leisure and hospitality businesses once again notched the largest payroll gain, with the sector adding 83,000 jobs in September. Within the sector, restaurants and bars counted for 60,000 new payrolls. Yet employment in the sector is still down by 1.1 million payrolls compared to pre-pandemic levels, underscoring the long trek ahead to a full services recovery.

The public sector posted the largest decline, with government jobs falling by 25,000 in September. Transportation and warehousing firms shed 7,900 jobs through the month, but employment in the sector remains well above the levels seen in February 2020.

After a transcendent recovery and more than a year of a so-called labor shortage, the labor market is easing up. Higher interest rates started to weigh on demand through the summer, leading companies to brace for weaker revenues. As spending wanes, firms are forced to either accept lower profits or cut costs, and such cuts typically affect headcount.

Hiring plans have changed accordingly. Job creation has eased from the extraordinary pace seen last year, and while the September gain remains historically strong, it extends a slowdown that kicked off in early 2022.

Wages extended their climb from the summer, but at a slower pace than in August. Average hourly earnings gained by $0.10, or 0.3%, to $32.46 last month, matching the median forecast. Pay growth, like job creation, has eased up in recent months as the labor market creeps toward a new normal, and as inflation remains elevated, the slowdown risks leaving households with even less buying power than before.

Job openings data published earlier in the week showed firms’ plans for future hiring similarly easing up. Openings plunged to 10.1 million from 11.2 million in August, staging the largest one-month drop since the first months of the pandemic recession in 2020.

The shift into a more normal labor market will likely charge well into 2023. Fed Chair Jerome Powell noted in a September 21 press conference that “some softening of labor market conditions” is likely as the central bank lifts rates higher and puts more of a drag on hiring. That will leave some households to bear economic pain, but failure to cool inflation would present a much more significant danger, he added.

Still, the central bank’s own projections spell out an unappealing outlook for the labor market. The median estimates from the Federal Open Market Committee see the unemployment rate climbing to 4.4% in 2023 and staying there through 2024 as inflation eases up. If that projection proves correct, the increase in unemployment from July’s 3.5% rate would mean about 1.5 million more unemployed Americans.